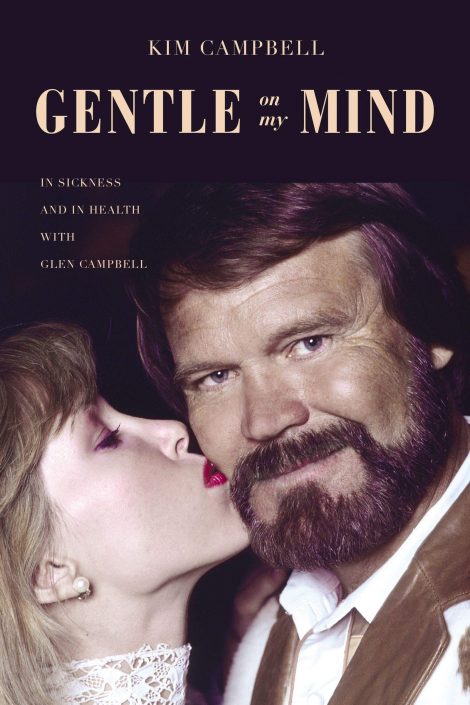 GENTLE ON MY MIND

In Sickness and in Health with Glen Campbell

In Gentle on My Mind, Kim tells the complete, no-holds-barred story of their relationship,

In Gentle on My Mind, Kim tells the complete, no-holds-barred story of their relationship, recounting the highest of highs—award shows, acclaimed performances, the birth of their children, encounters with Mick Fleetwood, Waylon Jennings, Alan Jackson, Alice Cooper, Jane Seymour, and others—and the lowest of lows, including battles with alcohol and drug addiction and, finally, Glen’s diagnosis, decline, and death from Alzheimer’s.

With extraordinary candor, astonishing bravery, and a lively sense of humor, Kim reveals the whole truth of life with an entertainment giant and of caring for and loving him amid the extraordinary challenge of Alzheimer’s disease. This is a remarkable account of enduring love, quiet strength, and never-faltering faith.

Kim Campbell was married to legendary country/pop star Glen Campbell for thirty-four years until his passing in August of 2017, following a long and very public battle with Alzheimer’s. The award-winning documentary, Glen Campbell: I’ll Be Me, shared their family’s journey with the world and opened up a national conversation about the disease. Kim’s work as an advocate for people with dementia and for their families has taken her to Capitol Hill and the United Nations, and she is the creator of a website called CareLiving.org that encourages, informs, and inspires caregivers to take care of themselves while caring for others. She also established the Kim and Glen Campbell Foundation to advance the use of music as medicine to unlock forgotten memories, restore and rebuild neural pathways, alleviate depression, manage behaviors and boost cognition. Kim is an honorary faculty member of the Erickson school of Aging Studies, University of Maryland, Baltimore County, holds a BFA from East Carolina University, and studied interior design at UCLA.

It was my first and only blind date. I was blind to the excitement surrounding the man I was about to meet. He was blind to the young woman he had been told was attractive. I remember the date—May 28, 1981—because it looms large as the moment my life changed forever.

In a few weeks, I would turn twenty-three. I didn’t know that Glen Campbell was forty-five. I didn’t know much about him at all. I knew his name, of course, but at the height of his fame, when he starred in his own national TV show, I was ten years old and only vaguely aware of him. I didn’t read the tabloids and knew nothing of his tumultuous romances and difficult divorces. I had no idea that he was fresh off a ten-month, knock-down, drag-out affair with fiery country star Tanya Tucker. Had I known, I might have bowed out before I bowed in. Sometimes ignorance is bliss. In this case, ignorance led to bliss.

The city was New York. The occasion was a James Taylor concert. James Taylor, along with the sublime Joni Mitchell, was an artist who always inspired me. The blind date had been set up through my friend Lynn Williford, whom I had met my freshman year at East Carolina University. Lynn was Miss Majorette of America and in many ways my role model. I’d been head majorette of my high school, but Lynn, with her dazzling twirls, spins, and spectacular behind-the-back catches, performed on another level. She was also stunningly beautiful—outrageously long eyelashes, big Bambi eyes, and a sweet disposition. I guess you could say Lynn and I both fit in that elusive All-American Girl category, although Lynn was in a category all her own.

At the 1981 Azalea Festival, she had been crowned Miss North Carolina, where she had the honor of introducing Glen Campbell and his band to the adoring throngs. That’s where she met Carl Jackson, Glen’s banjo player. They stayed in touch, and a few months later the Campbell crew was in New York. Lynn and I had also moved to the city where we were pursuing careers in dance. My world was ballet and Broadway, Mikhail Baryshnikov and Bob Fosse. Yes, I admit it, I loved Liza Minnelli. I also had a crazy schedule: ballet classes in the morning and dancing two shows a day with the Rockettes at Radio City Music Hall. I even managed to squeeze in a jazz class in between shows. I was dancing seven hours a day. I weighed 101 pounds and ate a pint of Häagen-Dazs every day. Ah, the joys of being young!

Through Carl Jackson, Lynn made the arrangements for our date. For the first and only time, I told my dance captain I was sick and couldn’t make the evening performance. To be brutally honest, my main motivation was to see James Taylor. I was far more a fan of folk and Southern rock than mainstream country music. At the same time, I knew that Glen was a star. The prospect of meeting a star is always alluring. I was curious.

The date was unconventional, but then again, everything about my life with Glen became unconventional. Why should our first encounter be any different? Carl and Lynn took me to the Waldorf Astoria where Glen was staying with his parents. Carl said earlier that day Glen had taken his folks to see Mickey Rooney and Ann Miller in Sugar Babies. I was impressed. Glen was apparently a good son.

We went up to his suite where we waited in the lavish living room. Only a few minutes passed before he burst into the room singing “Rhinestone Cowboy”! Quite an entrance. Quite a man, I thought. He was tall, blond, and handsome. His sandy hair was perfectly in place. His soft beard was neatly trimmed. His light-blue silk shirt mirrored his light-blue eyes. His zippered boots were crafted of black ostrich. His voice projected an intoxicating mixture of mellifluousness and enthusiasm. When his eyes met mine, I felt myself melting—just a bit. And then a bit more when he said, “Carl, why didn’t you tell me she was so pretty!”

Music to my ears. It didn’t sound like a line, though. Glen sounded sincere. His sincerity, in fact, was so strong—along with his sexiness—that, while I was normally a composed young woman, I felt nervous, shy, and even intimidated.

The presence of his parents took off the edge. Like me, they came from a small country town. Down-to-earth, good-hearted folks without a bit of pretension. They made me feel safe.

Dinner at Peacock Alley, in the marble-columned, palm-tree-décor lobby of the Waldorf, was somewhat overwhelming. Until that night, the New York I knew was a city of coffee shops and delis where struggling actors and dancers like me dined on tuna fish and meat loaf. Peacock Alley was the epitome of elegant refinement. I did not feel elegant, I did not feel refined, but I did feel a magnetism coursing between me and Glen. Was I inventing that dynamic? Was I fantasizing that this man seemed to be as drawn to me as I was to him? Maybe. But maybe not. During dinner he couldn’t have been more solicitous. He peppered me with questions about my past. His queries weren’t pushy; they were genuinely sweet; he seemed genuinely interested. I wished I had known more about his career, but he was happy to keep the attention on me.

When the food arrived, Glen bowed his head and said a simple blessing. That humble gesture caught me by surprise.

With hesitation I asked Glen, “Are you a Christian?”

“Yes,” he said with a note of honest conviction in his voice.

At that moment, I flashed back to something that had happened a week earlier. I had been walking down Fifth Avenue with two girlfriends I had danced with in Disney’s Broadway show Snow White before landing my current job at Radio City. With a fairy tale involving a handsome prince in recent memory, we were wistfully wishing for a man of our dreams.

It was starting to look like it, especially when we arrived at the theater where flash bulbs were popping, paparazzi were screaming Glen’s name, and fans were reaching out for autographs. Glen put his arm around me protectively and ushered me to our seats. James Taylor was great. He sang “Fire and Rain,” “Sweet Baby James,” and all his beautiful songs.