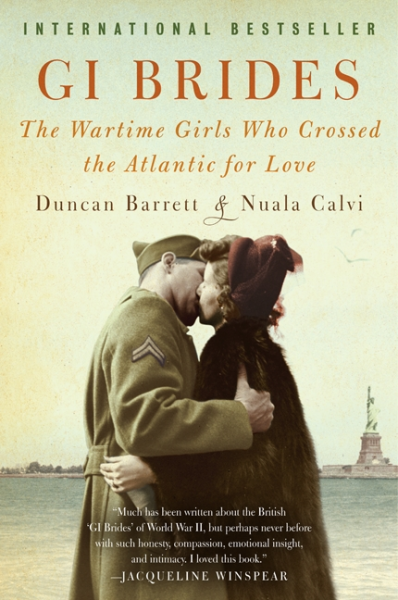 The Wartime Girls Who Crossed the Atlantic for Love

For readers enchanted by the bestsellers The Astronaut Wives Club, The Girls of Atomic City, and Summer at Tiffany’s, an absorbing tale of romance and resilience—the true story of four British women who crossed the Atlantic for love, coming to America at the end of World War II to make a new life with the American servicemen they married.

The “friendly invasion” of Britain by over a million American G.I.s bewitched a generation of young women deprived of male company during the Second World War. With their exotic accents, smart uniforms, and aura of Hollywood glamour,

For readers enchanted by the bestsellers The Astronaut Wives Club, The Girls of Atomic City, and Summer at Tiffany’s, an absorbing tale of romance and resilience—the true story of four British women who crossed the Atlantic for love, coming to America at the end of World War II to make a new life with the American servicemen they married.

The “friendly invasion” of Britain by over a million American G.I.s bewitched a generation of young women deprived of male company during the Second World War. With their exotic accents, smart uniforms, and aura of Hollywood glamour, the G.I.s easily conquered their hearts, leaving British boys fighting abroad green with envy. But for girls like Sylvia, Margaret, Gwendolyn, and even the skeptical Rae, American soldiers offered something even more tantalizing than chocolate, chewing gum, and nylon stockings: an escape route from Blitz-ravaged Britain, an opportunity for a new life in affluent, modern America.

Through the stories of these four women, G.I. Brides illuminates the experiences of war brides who found themselves in a foreign culture thousands of miles away from family and friends, with men they hardly knew. Some struggled with the isolation of life in rural America, or found their soldier less than heroic in civilian life. But most persevered, determined to turn their wartime romance into a lifelong love affair, and prove to those back home that a Hollywood ending of their own was possible.

Duncan Barrett studied English at Cambridge and now works as writer and editor, specialising in biography and memoir. He most recently edited The Reluctant Tommy (Macmillan, 2010) a First World War memoir.

Nuala Calvi also studied English and has been a journalist for eight years with a strong interest in community history pieces. She took part in the Streatham Stories project to document the lives and memories of people in South London.

They live in South London.

“This is a treasure box of testimonies from a very different world, and one that will soon slip from living memory. Kudos to the authors for capturing these memories for posterity, and in such a readable, touching way.” —The Londonist

“Much has been written about the British “G.I. Brides” of World War II, but perhaps never before with such honesty, compassion, emotional insight and intimacy. I loved this book, and once picked up, it was really hard to put down.” —Jacqueline Winspear, New York Times Bestselling Author

You interviewed more than sixty women for GI Brides. How did you decide which people to focus on?

Interviewing so many women gave us a great insight into the experience of being a GI bride, but for the four main characters we needed stories that really stood out—where the women had

faced adversity and grown as a result. Margaret, Rae, Lyn, and Sylvia all faced dif?culties in their own ways, but they were all incredibly strong women who found a way to cope with the obstacles life threw at them.

What struck you the most about their shared experience?

One of the things that really stood out was how ?nal the women’s decision to go to America was. In those days a ticket home was beyond the reach of many people and divorce was unthinkable. There was also a sense of shame about admitting to those back home that

things weren’t working out. Thousands of miles from home, unable to pick up a phone and call friends and family, these women really were on their own. So many people told us the same thing that Sylvia’s mother said: “We’d made our bed, and now we had to lie in it.” They

had to ?nd a way to make life in America work.

Was it easier or more dif?cult telling Margaret’s story? Are there challenges of recounting something so close to home?

We left writing Nuala’s grandmother’s story till last, because we knew it would be dif?cult for Nuala, especially since Margaret had died only a year earlier. Describing that period of Margaret’s

life was very dif?cult, because it felt like going through it all with her. But ultimately it reaf?rmed what a strong, amazing woman we both knew her to be.

The idea of crossing an ocean for love is romantic, and yet the reality was often less rose-tinted. What were the most common dif?culties that came up in

your interviews? What brought the most joy?

Nearly all the women experienced homesickness, even if their husbands and in-laws were kind. Usually this kicked in after about three months. One woman said it hit her when she was getting the bus back from going shopping one day. “It was like a big vacation to me,” she told us, “and then

it suddenly dawned on me: I was here for the rest of my life.” It was generally once the women started having their children that they began to feel more part of the community, and they found happiness

in having a family of their own. They also found joining war bride groups a great source of comfort.

Tell us more about your road trip across America. Where did you go, how many places did you visit? Did you have a most memorable stop? How did this journey affect the shape of GI Brides?

We covered most of the country over three months—and made the most of the travelling. On the way we saw the Grand Canyon and Yellowstone and

Yosemite National Parks. We were struck by what a stunningly beautiful country the United States is, but also by how much empty space there is, which is so different to England. In the desert you could drive for hours between towns, or even between service stations—it made us realize how isolating it could feel

if you didn’t know anyone here.

As the Greatest Generation ages, it seems more important than ever to record their stories. Did you feel an urgency or a responsibility to bring this narrative to life?

De?nitely, and we were lucky that most people were willing to cooperate. There seems to be more reverence for that generation in America than there is in Britain. It’s been wonderful to witness the celebrations planned through the Spirit of ’45 campaign, and the way the war brides were treated at the National World War II Museum in New Orleans when we went there with them for their reunion in 2013. In America they are really seen as special.

How have Sylvia, Lyn, and Rae reacted to the book? Have they said what is like having their stories shared with the world?

she had gotten herself into a book in her

would happen. She’s looking forward to

seeing it in shops in America. Rae still

gives talks to schoolchildren about her

experiences in the war, and feels it’s a

part of history that is important to

nervous about showing the book

to her family—she warned her son,

the important thing was that she had

was astonished to read it. “Grandma,

I couldn’t believe you went through all