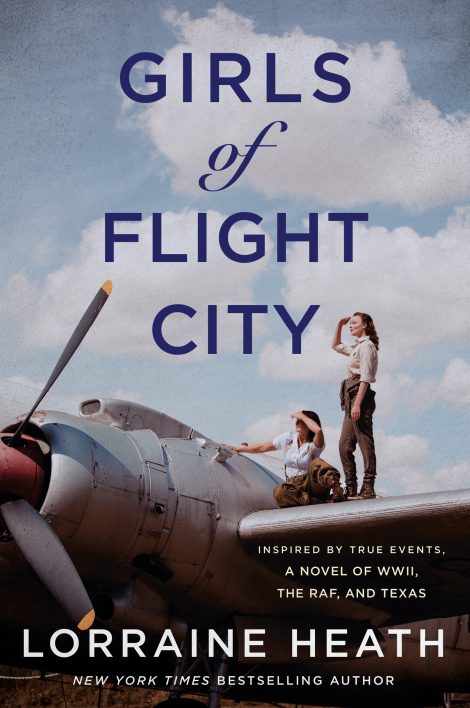 Inspired by True Events, a Novel of WWII, the Royal Air Force, and Texas

1941. A talented flier, Jessie Lovelace yearns for a career in aviation. When the civilian flight school in her small Texas town begins to clandestinely train British pilots for the RAF, she fights to become an instructor. But the task isn’t without its perils of near-misses and death. Faced with the weight of her responsibilities, she finds solace with a British officer who knows firsthand the heavy price paid in war…until he returns to the battles he never truly left behind.

1941. A talented flier, Jessie Lovelace yearns for a career in aviation. When the civilian flight school in her small Texas town begins to clandestinely train British pilots for the RAF, she fights to become an instructor. But the task isn’t without its perils of near-misses and death. Faced with the weight of her responsibilities, she finds solace with a British officer who knows firsthand the heavy price paid in war…until he returns to the battles he never truly left behind.

Rhonda Monroe might not be skilled in the air but can give a trainee a wild ride in a flight simulator. Fearing little, she dares to jeopardize everything for a forbidden relationship with a charismatic airman…

Innocent and fun-loving Kitty Lovelace, Jessie’s younger sister, adores dancing with these charming newcomers, realizing too late the risks they pose to her heart.

As the war intensifies and America becomes involved, the Girls of Flight City do their part to bring a victorious end to the conflict, pouring all their energy into preparing the young cadets to take to the skies and defeat the dangers that await. And lives from both sides of the Atlantic will be forever changed by love and loss…

When multiple New York Times bestselling author Lorraine Heath received her BA degree in psychology from the University of Texas, she had no idea she had gained a foundation that would help her create believable characters—characters often described as “real people.” The daughter of a British beauty and a Texan stationed at RAF Bovingdon, Lorraine was born in England but soon after moved to Texas. Her dual nationality has given her a love for all things British and Texan, and she enjoys weaving both heritages through her stories.

“Girls of Flight City takes a little-known bit of World War II history from a small Texas town and creates a heart-warming story about the power of connection. This is a wonderful story about love, hope, sacrifice, and finding community in unexpected places.”–Elise Hooper, author of Fast Girls

“In Girls of Flight City, Lorraine Heath delivers a touching tale of the WWII home front. The story of the women who trained RAF pilots in Texas before the US entry into the war shows the sacrifice and dedication of the brave women called to serve their cause. With vibrant characters and gripping action sequences, Girls of Flight City is a sure to be a favorite with fans of WWII fiction. A well-researched pleasure to read.”–Aimie K. Runyan, bestselling author of Daughters of the Night Sky and Across the Winding River

“Girls of Flight City is an engaging, inspiring story crafted from the real history of a small Texas town during World War II. The women who broke through barriers and trained RAF pilots before the events of Pearl Harbor did so with courage, sacrifice, love, and friendship, and Girls of Flight City immerses the reader into their lives every step of the way. A fascinating, well-researched, and deftly-written read.”–Kelly Bowen, author of The Paris Apartment

“With this unique take on a WWII tale, best-selling romance author Heath’s first foray into women’s fiction is bound to attract her legion of fans and some new ones as well.” –Booklist

1. Prior to reading Girls of Flight City were you familiar with the various jobs American women took on in helping to train British Royal Air Force pilots?

2. Jessie, Rhonda, and Kitty each have very distinct personalities. Which of the three women resonated with you the most?

3. Despite aviation being a heavily male dominated space, Jessie fights fiercely to become an instructor
to train British pilots for the RAF. What were some of the challenges that came along with being a woman in this space? What were the rewards?

4. The Girls of Flight City played a big role in preparing the young British cadets for flight, sacrificing a great deal in the process. Would you have taken on the Girls’ role if you were placed in their shoes?

5. What did you make of Rhonda and Peter’s relationship? Were you surprised by how their relationship unfolded?

6. At sixteen, Kitty was excited about all the young men coming to her town and was hoping to experience her first taste of love. How did she change throughout the story?

7. How do you think Jessie’s, Rhonda’s, and Kitty’s lives might have evolved or been different if the British had never come to Terrence?

8. Were you satisfied with the ending of the novel? Is there anything you would change?

On January 17, 1991, an article written by Dan Shine appeared in the Dallas Morning News titled “The Air Unites Us” and told the story of Virginia Brewer, sixty-eight at the time, who looked after the twenty graves of fallen British pilots in Terrell, Texas. It was my introduction to the No. 1 British Flying Training School and sparked the idea for a story that haunted me through the years.

In 1940, as Great Britain was drawn further into war with Germany, the government realized it needed many more Royal Air Force pilots than could be trained in a small island country in danger of attacks from enemy aircraft. Initially, schools to train RAF pilots were established in a number of Commonwealth countries, but more schools were needed. Therefore, Prime Minister Winston Churchill approached President Franklin Roosevelt for assistance.

Because the United States had adopted an isolationist policy, a great deal of strategizing occurred to find a way to help Britain without the United States appearing to be actively involved in the war effort. In 1941, civilian pilot training schools were converted to British Flying Training Schools. The first BFTS was established in Terrell, Texas. Two more would be located in Oklahoma and then one in California, Arizona, and Florida. For the span of a few months, a seventh school was opened in Sweetwater, Texas. (It was later used to train women pilots.) The first British cadets arrived in June 1941, the last in early 1945. During those years more than 6,600 pilots earned their wings at these civilian schools.

Terrell, Texas, and the airmen who protected the skies over Great Britain hold a special place in my heart, because my father graduated from Terrell High School and my mother was a young girl growing up just outside of London as bombs fell.

Although this story takes place in Texas, the fictional flight school and town are meant to be a representation of all the BFTS’s and neighboring towns. While I have tried to be as factually accurate as possible, I have taken some literary license. I was unable to find a specific example of a woman serving as a flying instructor at a BFTS, but women were training pilots for the U.S. military, so I feel that somewhere they may have also trained British pilots. I did find examples of women teaching navigation and meteorology as ground instructors in the classroom. They also served as Link Trainer operators, mechanics, administrative staff, parachute riggers, and control tower operators.

Will’s crash into a mountain was based on a February 20, 1943, incident that involved two AT-6’s crashing into the Kiamichi Mountains in Oklahoma. On February 20, 2000, the students of a small school in Rattan, Oklahoma, erected a marker at one of the crash sites to commemorate those lost and to ensure that aspect of the war was never forgotten.

The student falling out of the cockpit during a roll is based on a documented account of a cadet who forgot to harness himself in. As is the incident of one plane landing on top of the other, with minor injuries suffered and the aircraft severely damaged.

This story also incorporates other aspects of World War II history. American fliers joined the RAF before the United States declared war on Germany. Because of the Neutrality Acts, they were at risk of losing their American citizenship. The exact number who joined up is unclear because not all admitted to being Americans—hoping to avoid having their involvement confirmed so they could return to the U.S. after the war. Unable to use their passports or obtain visas, they had to sneak out of the United States via Canada to travel to England to join the RAF. Yanks in the RAF by David Alan Johnson is a fascinating account of those who began their service before December 7, 1941.

British Squadron 601 was nicknamed the Millionaire’s Squadron because its fliers were members of White’s, an exclusive gentlemen’s club. Sons of the aristocracy, the wealthy, and the elite, they proved themselves during the Battle of Britain.

Peter’s escape from Stalag Luft III was based on an actual escape from the prison camp that housed captured airmen. On the night of March 24, 1944, seventy-six prisoners escaped through a tunnel. Seventy-three were recaptured. Furious by the embarrassment, Hitler ordered fifty executed. The movie The Great Escape was based on the escape from this camp.