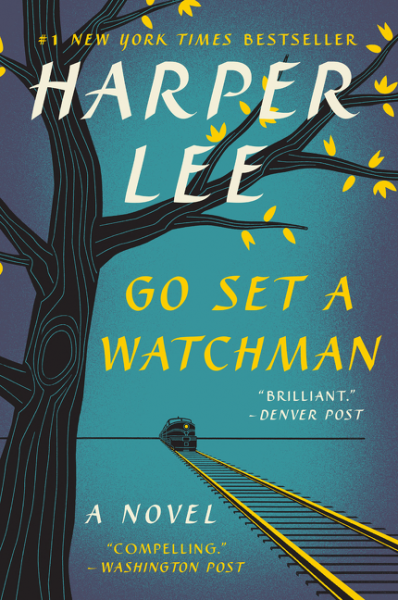 Maycomb, Alabama. Twenty-six-year-old Jean Louise Finch—“Scout”—returns home from New York City to visit her aging father, Atticus. Set against the backdrop of the civil rights tensions and political turmoil that were transforming the South, Jean Louise’s homecoming turns bittersweet when she learns disturbing truths about her close-knit family, the town, and the people dearest to her. Memories from her childhood flood back, and her values and assumptions are thrown into doubt.

Featuring many of the iconic characters from To Kill a Mockingbird, Go Set a Watchman perfectly captures a young woman, and a world, in painful yet necessary transition out of the illusions of the past—a journey that can only be guided by one’s own conscience.

Maycomb, Alabama. Twenty-six-year-old Jean Louise Finch—“Scout”—returns home from New York City to visit her aging father, Atticus. Set against the backdrop of the civil rights tensions and political turmoil that were transforming the South, Jean Louise’s homecoming turns bittersweet when she learns disturbing truths about her close-knit family, the town, and the people dearest to her. Memories from her childhood flood back, and her values and assumptions are thrown into doubt.

Featuring many of the iconic characters from To Kill a Mockingbird, Go Set a Watchman perfectly captures a young woman, and a world, in painful yet necessary transition out of the illusions of the past—a journey that can only be guided by one’s own conscience.

Written in the mid-1950s, Go Set a Watchman imparts a fuller, richer understanding and appreciation of Harper Lee. Here is an unforgettable novel of wisdom, humanity, passion, humor, and effortless precision—a profoundly affecting work of art that is both wonderfully evocative of another era and relevant to our own times. It not only confirms the enduring brilliance of To Kill a Mockingbird but also serves as its essential companion, adding depth, context, and new meaning to an American classic.

Harper Lee was born in 1926 in Monroeville, Alabama. She is the author of the acclaimed To Kill a Mockingbird and Go Set a Watchman, which became a phenomenal #1 New York Times bestseller when it was published in July 2015. Ms. Lee received the Pulitzer Prize, the Presidential Medal of Freedom, and numerous other literary awards and honors. She died on February 19, 2016.

“Go Set a Watchman is such an important book, perhaps the most important novel on race to come out of the white South in decades.”—Clay Risen, New York Times

“Provides valuable insight into the generous, complex mind of one of America’s most important authors.”—USA Today

“Watchman is compelling in its timeliness.”

Go Set a Watchman takes place more than twenty years after To Kill a Mockingbird begins. When Watchman opens, Jean Louise Finch—now twenty-six and living in the North, in New York City—is returning to her hometown of Maycomb, Alabama. Describe the Maycomb of Go Set a Watchman. If you have read Mockingbird, has the town changed in the intervening years? If so, how?

Harper Lee writes, “Until comparatively recently in its history, Maycomb County was so cut off from the rest of the nation that some of its citizens, unaware of the South’s political predilections over the past ninety years, still voted Republican.” What are these predilections, and where do they originate? What is Harper Lee telling us about the period and the politics and attitudes of this small Southern town?

Maycomb is a town without train service, and its bus service “was erratic and seemed to go nowhere.” How does this lack of connection isolate the citizens of Maycomb, and how does that isolation affect how they see themselves and outsiders? Early in the novel, her longtime friend Henry Clinton tells her “you’re gonna see Maycomb change its face completely in our lifetime.” What does he foresee that Jean Louise cannot—or perhaps does not want to see?

Think about the extended Finch family. What is their status in Maycomb? What is the significance of being a Finch in this small Southern town? Does it afford them privileges—as well as expectations of them and responsibilities—that other families do not share? Do the Finches have freedoms that others do not enjoy?

Describe the Jean Louise Finch of Watchman. How does this grown-up woman compare to her younger self? How does Jean Louise conform—or not—to the ideal of womanhood in the 1950s? What was that ideal? Compare her to her Aunt Alexandra and the women of Maycomb. Does she fit in with these women? What did you learn about them at the Coffee social that Aunt Alexandra hosts in Jean Louise’s honor? In both Mockingbird and Watchman, Alexandra tells Jean Louise that she is part of a genteel family and that she must at like a “lady.” How did ladies “act” in the first half of the twentieth century and is there such a thing as a “lady” today?

Has living away from Maycomb—and in a place like New York—had an impact on Jean Louise? What does she think about New York and life there? What does the big city offer her that Maycomb does not—and vice versa? Now that Atticus is older and suffering from arthritis, why doesn’t Jean Louise move back to Maycomb permanently? “Maycomb expected every daughter to do her duty. The duty of his only daughter to her widowed father after the death of his only son was clear: Jean Louise would return and make her home with Atticus; that was what a daughter did, and she who did not was no daughter.” What responsibilities do children—especially female children—owe their parents?

Describe the relationship between Jean Louise and Atticus at the beginning of the novel. Does Jean Louise idealize her father too much? How does she react when she discovers that her father is a flawed human being? How does this discovery alter her sense of herself, her family, and her world? By the novel’s end, how do father and daughter accommodate each other?

Talk about the Atticus portrayed in Go Set a Watchman. If you read Watchman first, how might the novel color your ideas about the Atticus Finch in To Kill a Mockingbird? What was your reaction to some of the opinions he voices in Watchman? Do they make him a more realistic—if less heroic—character than that portrayed in Mockingbird? Is Atticus racist? Would he consider himself to be racist?

“Integrity, humor, and patience were the three words for Atticus Finch.” After your reading of Watchman, do these three words still hold true? What words would you use to describe him?

What are Jean Louise’s feelings toward Henry Clinton? Would he make a good husband for her? Both her aunt and her uncle tell her that Henry isn’t “suitable,” that he “is not her kind.” What do they mean, and what does it mean to Jean Louise? Is it strictly because of Henry’s background or is there something more? What adjectives would you use to describe Henry’s character?

Is Henry like Atticus, his mentor and friend? Is Jean Louise’s assessment of Henry later in the novel correct? Are Henry and Atticus good men? Can you be a moral person and hold views that may be unacceptable to most people? How do Atticus’s actions toward the blacks of Maycomb compare with his views about them?

Why does Maycomb have a citizens’ council, and why does this upset Jean Louise when she discovers that nearly everyone in town belongs to it? By allowing the likes of a racist segregationist like Grady O’Hanlon to speak at the meeting, are Atticus and Henry defending O’Hanlon’s First Amendment right to free speech—or are they condoning his message?

Harper Lee writes, “Had she been able to think, Jean Louise might have prevented events to come by considering the day’s occurrences in terms of a recurring story as old as time: the chapter which concerned her began two hundred years ago and was played out in a proud society the bloodiest war and harshest peace in modern history could not destroy, returning, to be played out again on private ground in the twilight of a civilization no wars and no peace could save.” Why would this realization have helped Jean Louise? Are we still fighting the Civil War today?

Harper Lee offers a window into Jean Louise’s turmoil after she attends the citizens’ council meeting. “Had she insight, could she have pierced the barriers of her highly selective, insular world, she may have discovered that all her life she had been with a visual defect which had gone unnoticed and neglected by herself and by those closest to her: she was born color blind.” Why is Jean Louise’s color blindness a “visual defect”? How does being color blind shape who she is and how she sees the world?

Trying to reconcile the knowledge Jean Louise has learned with her views of those she loves forces her to confront painful questions. “What was this blight that had come down over the people she loved? Did she see it in stark relief because she had been away from it? Had it percolated gradually through the years until now? Had it always been under her nose for her to see if she had only looked? No, not the last.” What makes her say no to this question? And finally, “What turned ordinary men into screaming dirt at the top of their voices, what made her kind of people harden and say ‘nigger’ when the word had never crossed their lips before?” What answers can you give her?

What kind of reception does Jean Louise receive in the Quarters when she visits Calpurnia, the Finches’ retired housekeeper? How does Calpurnia react to seeing Jean Louise, and what is Calpurnia’s response when Jean Louise asks her how she truly felt about her family? Would Calpurnia have answered the same way if asked that question a few years earlier—or if asked a few years later?

Near the novel’s end, Jean Louise questions herself. “Everything I have ever taken for right and wrong these people have taught me—these same, these very people. So it’s me, it’s not them. Something has happened to me.” Do you agree with her? Has she changed—or is she truly the person who she was raised to be? Atticus tells her, “I’ve killed you, Scout. I had to.” What does he mean?

Do you think that the white community of Maycomb sees itself as being victimized in Go Set a Watchman? How do these people justify this belief—and how does this belief justify their attitude and behavior toward the emerging Civil Rights movement and those who are a part of it, especially the black people of Maycomb?

Go Set a Watchman was written three years after the landmark Supreme Court decision in Brown v. the Board of Education. How did that decision impact the nation and especially the South? What is Jean Louise’s opinion of that decision? What about Atticus’s? How do their responses reflect comments about Supreme Court decisions involving minority rights in our own time? What does this tell us about ourselves as Americans and about our views of race today?

Consider the novel’s title, Go Set a Watchman. What is its significance? Why do you think Harper Lee chose this as her title for the book? Though it is fiction, the book is a historical document of its time. What does reading it tell us about the modern Civil Rights movement and its effect on the South? What lessons does the book offer us in understanding our own turbulent times?

How have our attitudes about race evolved since the 1950s when Watchman was written? In what ways have we progressed? Is the stain of racism indelible in our national character, or can it eventually be erased? Can it be eradicated for good?

Late in the novel, Uncle Jack tells his niece, “Every man’s island, Jean Louise, every man’s watchman, is his conscience.” What wisdom is he imparting to her? Uncle Jack also calls Jean Louise a “turnip-sized bigot.” Is she? Why?