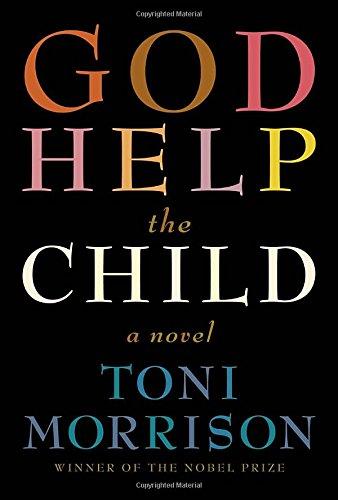 Spare and unsparing, God Help the Child—the first novel by Toni Morrison to be set in our current moment—weaves a tale about the way the sufferings of childhood can shape, and misshape, the life of the adult.

At the center: a young woman who calls herself Bride, whose stunning blue-black skin is only one element of her beauty, her boldness and confidence, her success in life, but which caused her light-skinned mother to deny her even the simplest forms of love. There is Booker, the man Bride loves, and loses to anger. Rain, the mysterious white child with whom she crosses paths.

Spare and unsparing, God Help the Child—the first novel by Toni Morrison to be set in our current moment—weaves a tale about the way the sufferings of childhood can shape, and misshape, the life of the adult.

At the center: a young woman who calls herself Bride, whose stunning blue-black skin is only one element of her beauty, her boldness and confidence, her success in life, but which caused her light-skinned mother to deny her even the simplest forms of love. There is Booker, the man Bride loves, and loses to anger. Rain, the mysterious white child with whom she crosses paths. And finally, Bride’s mother herself, Sweetness, who takes a lifetime to come to understand that “what you do to children matters. And they might never forget.”

A fierce and provocative novel that adds a new dimension to the matchless oeuvre of Toni Morrison.

Toni Morrison is the author of ten previous novels, from The Bluest Eye (1970) to Home (2012). She has received the National Book Critics Circle Award and the Pulitzer Prize. In 1993 she was awarded the Nobel Prize in Literature. She lives in New York.

“Intoxicating…Once again, she thrillingly brings the storytelling moxie and mojo that make her, arguably, our greatest living novelist.” –Elle

“One of the greatest authors in American history…She makes black life—regular, quotidian black life—complex, fantastic and heroic…It is both aphorism and beyond aphorism, and a result has been pure possibility…She is an author who writes to tease and complicate her world, not to convince others it is valid.” –The New York Times Magazine

“She is one of the gods who walk among us. In her sensually written and commanding new novel, she excavates the legacy of childhood trauma.” –Vanity Fair

“Consider me a convert…Before reading God Help the Child, I hadn’t yet experienced that visceral reaction so many of Morrison’s readers undergo after reading The Bluest Eye or Song of Solomon or Sula, that bittersweet storm of tenderness and outrage for which the inimitable writer is so extolled.” –Caroline Goldstein, Bustle

1. Morrison opens God Help the Child with a character insisting, “It’s not my fault. So you can’t blame me.” How does this set up what follows?

2. Multiple themes weave through the novel: childhood trauma, racism, skin color, social class, freedom. What would you say is the primary theme, and why?

3. Kirkus Reviews said of the book, “As in the darkest fairy tales, there will be fire and death.” In what other ways is God Help the Child like a fairy tale?

4. Over the course of an otherwise realistic novel, Bride’s body reverts from a curvy woman to an undeveloped girl. What’s going on there?

5. Several of the primary characters have different names from the ones they received at birth: Bride, Sweetness, Rain. What do these new names tell us about the characters?

6. At different points in the novel, Morrison switches from individual characters’ voices to third-person narration. How does this affect the reader’s understanding of what’s happening?

7. Why is Bride so uninterested in digging below the surface with Booker?

8. Discuss Bride’s friendship with Brooklyn. Over and over, Bride says how much she trusts Brooklyn, and what a good friend she is. What do these assertions tell us about Bride’s character? Does it matter that Brooklyn is white, with dreadlocks?

9. For as much as Sweetness hated Bride’s skin color, Bride turned it into an asset—as Jeri says on page 36, “Black sells. It’s the hottest commodity in the civilized world.” What changed from the time Bride was born until now? Have things really changed, or changed only on the surface?

10. Bride testified against Sofia to please her mother. On page 42 Sweetness recalls, “After Lula Ann’s performance in that court and on the stand I was so proud of her, we walked the streets hand in hand.” Why did Sweetness care so much about this trial?

11. On page 56, after Bride tells Booker about what she witnessed her landlord doing when she was a child, he says, “Correct what you can; learn from what you can’t. . . No matter how hard we try to ignore it, the mind always knows truth and wants clarity.” What does he mean by that?

12. The reader’s understanding of Booker is shaped by Bride’s recollection of his saying, “You not the woman I want,” her limited insights about him, and Brooklyn’s descriptions of him as a shady character. But in Part III we learn that he’s quite different from what we’ve imagined. What point is Morrison making here?

13. Bride holds on to Booker’s shaving brush, and Sofia keeps Bride’s earring. Why are these totems important?

14. When Bride is taken in by the white hippies, she is cut off from the world for weeks. How does this change her?

15. Why does Rain form such a special bond with Bride?

16. How did Adam’s death change Booker? Why did it affect him more than the rest of his family?

17. Discuss Bride’s sojourn with Queen. How does their relationship develop so quickly?

18. Although Queen has had many children, she has no close contact with any of them. What does this tell us about her? Why is she still a sympathetic character?

19. After Bride reads Booker’s writing about her, how does it change her impression of him?

20. What does it symbolize when Booker throws his trumpet into the stream with Queen’s ashes?

21. On page 180, Morrison describes Bride and Booker’s thoughts about the future: “A child. New life. Immune to evil or illness, protected from kidnap, beatings, rape, racism, insult, hurt, self-loathing, abandonment. Error-free. All goodness. Minus wrath. So they believe.” What do those last three words mean?

22. The novel begins and ends with Sweetness. Why?

23. Nearly every main character has had a brush with child sexual abuse. What is the cumulative effect?

24. In an interview with Stephen Colbert, Morrison said: “There is no such thing as race. . . . Racism is a construct, a social construct. And it has benefits. Money can be made off of it. People who don’t like themselves can feel better because of it. It can describe certain kinds of behavior that are wrong or misleading. So [racism] has a social function. But race can only be defined as a human being.” In the novel, Booker says similar things. Sweetness raised Bride the way she did because of Bride’s dark skin. How does this all tie together?