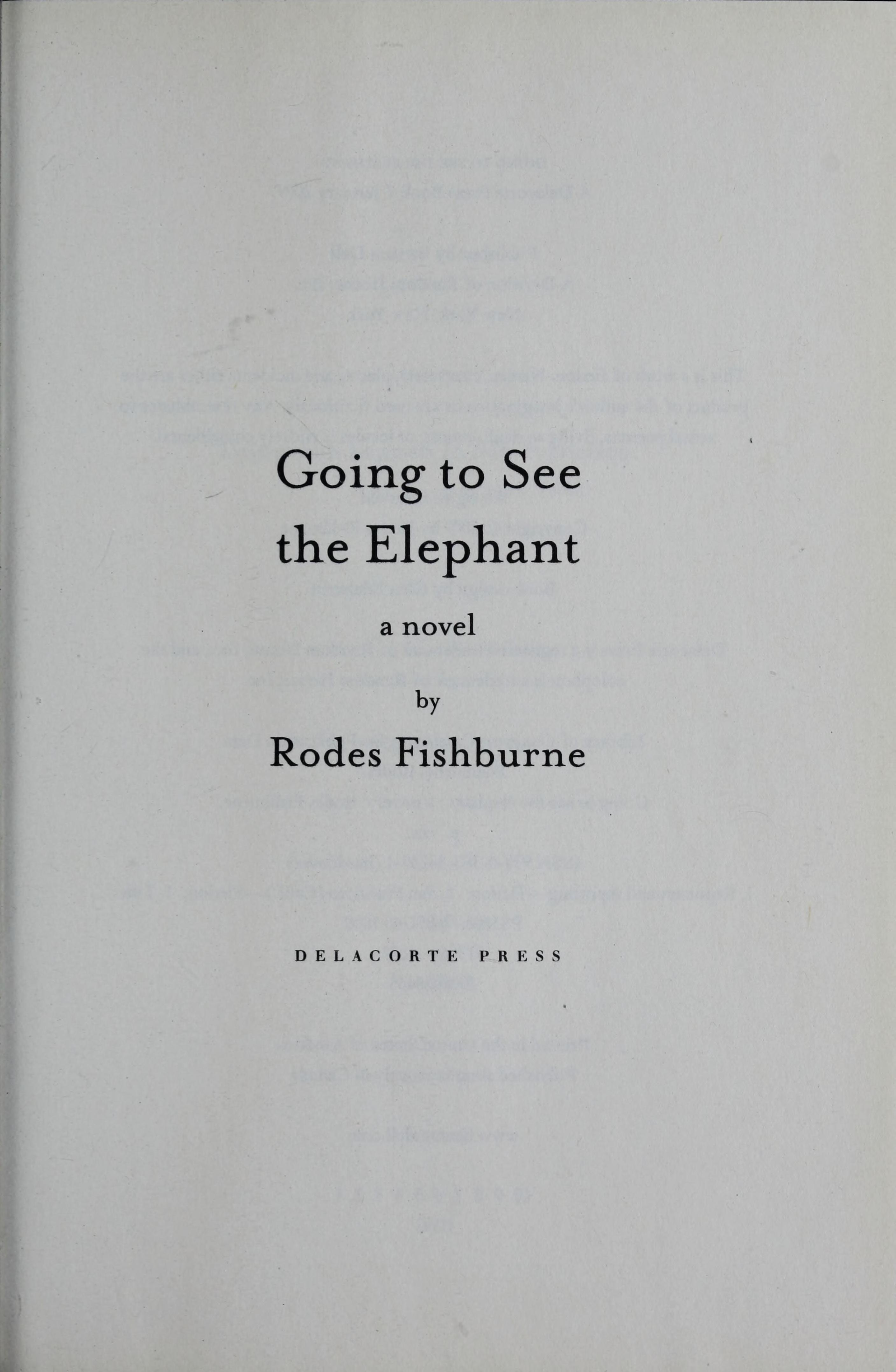 GOING TO SEE THE ELEPHANT

On a windy September day, twenty-five-year-old Slater Brown stands in the back of a bicycle taxi hurtling the wrong way down the busiest street in San Francisco. Slater has come to “see the elephant,” to stake his claim to fame and become the greatest writer ever. But this city of gleaming water and infinite magic has other plans in this astounding first novel—at once a love story, a feast of literary imagination, and a dazzlingly original tale of passion, ambition, and genius in all their guises…

On a windy September day, twenty-five-year-old Slater Brown stands in the back of a bicycle taxi hurtling the wrong way down the busiest street in San Francisco. Slater has come to “see the elephant,” to stake his claim to fame and become the greatest writer ever. But this city of gleaming water and infinite magic has other plans in this astounding first novel—at once a love story, a feast of literary imagination, and a dazzlingly original tale of passion, ambition, and genius in all their guises…

Slater Brown lays siege to San Francisco like Achilles circling Troy—until he crashes headlong into reality. Out of money and prospects, he applies for a job at a moribund weekly newspaper called the Morning Trumpet—and, as if by fate, is given a very special parting gift from a moonlighting mystic.

Suddenly Slater has an exclusive on every story in the city. With his uncanny knack for finding scoops, he’s bringing the Trumpet back to life, infuriating a corrupt mayor and falling in love with the woman destined to become his muse. But it is the astonishing inventor Milo Magnet—a man obsessed with harnessing the weather—who will force Slater to navigate the most dangerous straits.

For as Milo unleashes his power on San Francisco and the ravishing Callio de Quincy entrances Slater with hers, as storm clouds gather literally overhead, Slater will become at once a pawn, a savior, and the last best hope for a city that needs him—and his knack for the truth—more than ever before.

Rodes Fishburne has been published in the New Yorker, the New York Times, San Francisco Chronicle Magazine, and Forbes ASAP, where he was the editor of the acclaimed “Big Issue,” an annual magazine of literary essays from leading writers and thinkers. He is a member of the Grotto, a San Francisco writers’ collective. Going to See the Elephant is his first novel.

“Rodes Fishburne is onto something here. If you’ve ever been young you’ll recognize the wide-eyed innocence he serves up, if you’ve ever lived in a city you’ll recognize the fun house he mirrors, and the madcap ambition, the roll of the brave and shaky dice, the lightning-chord changes that leave everyone gleaming, and the luminous sucker punch of first love and first loss—all that’s our own. The closer you get to Going to See the Elephant the more we all see ourselves.” —Daniel Handler, aka Lemony Snickett

“Going to See the Elephant will delight anybody who has ever written a first novel, wanted to write a first novel, and especially those who cherish reading unforgettable first novels. It is both funny and wise.”—James Patterson

“Rodes Fishburne is a marksman hunting down first-novel fame, and he never misses.”
—Tom Wolfe

When we first meet Slater Brown, he is feverishly working on…nothing. What did you make of Slater’s burning need to write something without knowing what that something is? Did you interpret this as a sign of youthful foolishness or a natural desire for a talented young man? Did your opinion of Slater’s aspirations change throughout the novel?

Discuss the way that journalists are portrayed in Going to See the Elephant. What about politicians? How accurate did you find these depictions?

Early in the book, Slater reveals that he believes that a person who is destined to do something great will do so by age twenty-nine. Is there an age by which you believe great work, or great talent, should be demonstrated?

Consider the title, as well as the author’s note on the title, of this novel. What significance do you think the title has in the context of the story and characters of Going to See the Elephant?

What similarities do you see between Slater and Milo? What differences in their motivations?

Going to See the Elephant is set in a semi-realistic world. Why do you think the author made this choice? What did you feel the setting added to the reading experience?

Consider the question of fate versus action in this novel. Which characters seem to be driven by fate, and which take their destinies into their own hands? How much of our lives is controlled by outside forces and to what extent do actions determine fate?

Why do you think that weather becomes Milo’s obsession? What it is about controlling the weather that he finds so compelling?

On page 117, Slater says “Well you know what they say about stories. They find the people best suited to tell them.” Where do you see this being true in the world of this novel? Who tells what story, and why?

What is it that Slater sees in Callio upon their initial meeting? To what is he attracted? How does this change over time?

Discuss Havram’s relationship with his daughter. Is his anger toward Slater justified?

From what you are shown in the novel, do you think Slater is a good writer? Why or why not? Do you think his talents lie elsewhere? Will his newfound maturity help him accomplish his ambitious dream?

What is it that compels Slater to confide his secret to Callio? Did her reaction surprise you?

Consider Slater’s letter to Callio on page 259. How would you have reacted, were it written to you?

Did you like the ending of the novel? Why or why not?