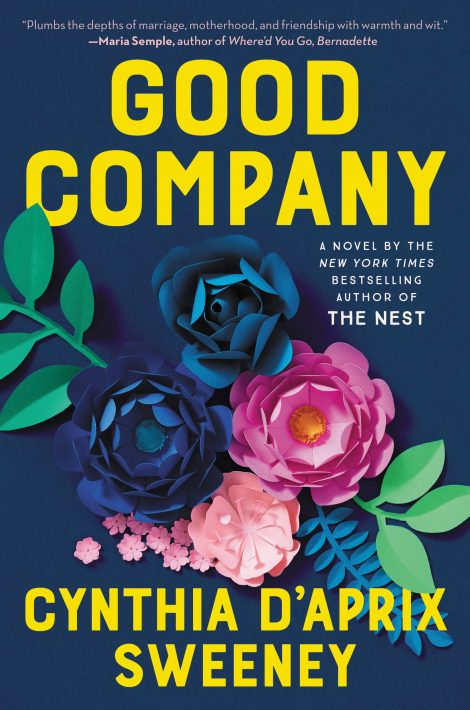 A warm, incisive new novel about the enduring bonds of marriage and friendship from Cynthia D’Aprix Sweeney, author of the instant New York Times bestseller The Nest.

Flora Mancini has been happily married for more than twenty years. But everything she thought she knew about herself, her marriage, and her relationship with her best friend, Margot, is upended when she stumbles upon an envelope containing her husband’s wedding ring—the one he claimed he lost one summer when their daughter, Ruby, was five.

A warm, incisive new novel about the enduring bonds of marriage and friendship from Cynthia D’Aprix Sweeney, author of the instant New York Times bestseller The Nest.

Flora Mancini has been happily married for more than twenty years. But everything she thought she knew about herself, her marriage, and her relationship with her best friend, Margot, is upended when she stumbles upon an envelope containing her husband’s wedding ring—the one he claimed he lost one summer when their daughter, Ruby, was five.

Flora and Julian struggled for years, scraping together just enough acting work to raise Ruby in Manhattan and keep Julian’s small theater company—Good Company—afloat. A move to Los Angeles brought their first real career successes, a chance to breathe easier, and a reunion with Margot, now a bona fide television star. But has their new life been built on lies? What happened that summer all those years ago? And what happens now?

With Cynthia D’Aprix Sweeney’s signature tenderness, humor, and insight, Good Company tells a bighearted story of the lifelong relationships that both wound and heal us.

Cynthia D’Aprix Sweeney is the author of the instant New York Times bestseller The Nest. She lives in Los Angeles with her husband and children.

“Cynthia D’Aprix Sweeney plumbs the depths of marriage, motherhood and friendship with warmth and wit. I devoured it in one gulp!  Treat yourself to some Good Company.”—Maria Semple, author of Today Will Be Different

“There are few writers who explore the depths of family and friendship with as much care and nuance as Cynthia D’Aprix Sweeney, whose new novel is a generous, empathetic portrayal of a marriage and friendship thrown into disarray by an accidental discovery. . . . D’Aprix Sweeney interrogates all that goes into building a life together — the messiness, the heartache, and the joy.” -Refinery 29

“From the bestselling author of The Nest comes another charming yet deceptively sharp tale of friendship, family, and all the things that get in the way of both….This is a perfect book for a quick weekend read—warm, funny, yet full of insight.” –Elle

“Cynthia D’Aprix Sweeney’s rich love story about friends who become family is generous and heartbreaking and true. I loved The Nest and I love Good Company even more.” -Jade Chang, author of The Wangs vs. The World

“What happens when one accidental discovery changes everything you believe about yourself and the people you love? Cynthia D’Aprix Sweeney’s unforgettable characters are so real, so human, and such good company (pun intended) as they struggle with profound questions about the lines between loyalty and secrecy, self-interest and self-preservation—and in doing so, ask us to do the same. Good Company is a beautifully nuanced meditation on marriage and friendship—their messiness and limitations, but also their boundless capacity for reinvention.” -Lori Gottlieb, author of Maybe You Should Talk to Someone

2. Flora and Margot’s relationship was born out of a time when they both shared similar dreams, but their paths diverged significantly as they grew older. What qualities do you think a friendship needs to have to evolve over many decades in this way? How do you think Flora and Margot managed to stay connected rather than drifting apart?

3. Flora and Julian have a marriage that seems, initially, to be rock solid. How much do you think Julian’s infidelity changes that? Does it negate the otherwise positive qualities that their relationship shared, or do you think their marriage is still strong in its own way?

4. Do you think Margot made the right decision to keep Julian’s secret? Do you think she truly had Flora’s best interests in mind, or was she driven by selfish impulses? What would you have done in her shoes?

5. Ruby has only a partial understanding of what is going on with her parents, and yet she is able to bring the family toward a moment of possible reconciliation at the end. How do you think she sees her parents’ relationship? Do you think Flora and Julian owe Ruby an explanation of what’s happened in their marriage or should the ups and downs of a relationship remain a private matter? Are children better off knowing the whole truth of their parents’ relationship?

6. What do you make of the fact that many of these characters are actors? Do you think their work performing as other people impacts their own character in any way? Are they perhaps more empathetic to others—or more deceitful? When one’s artistic practice is also one’s career, what are the upsides? The downsides?

7. What perspective do you think David brings to the friend group? How do you think he must feel as the only person who is not an artist, and the only one facing significant medical struggles? What do you make of his and Margot’s shared connection to the medical field—him as a practicing physician, her as an acting star playing a beloved TV doctor?

8. Flora and Julian have often struggled to make ends meet, while Margot and David are wealthy. How do you think money affects the relationships between these two couples? Do you think their level of financial success is tied to happiness, or not?

9. What do you make of Julian’s decision to keep his old wedding ring, even though it put him at risk to have Flora discover his secret? Does this reflect anything about his views on their marriage?

10. This book is split between New York City and Los Angeles. How do you think these characters’ lives change when they move from East coast to West coast? Do you think Flora and Julian’s move to LA demonstrates a shift in priorities? Have they given up on old dreams?

11. What do you think Flora will choose to do going forward? What would you do, if you were in her shoes?

Flora wasn’t looking for the ring when she found it. She was rooting around an old file cabinet in the garage, searching for a photograph from the summer Ruby was five, thirteen years ago. Long years? Short? Both, depending on how she thought about them. Flora had woken up thinking about the photo and she knew it had to be somewhere in the house. The photo had moved from the ugly brown refrigerator door in Greenwich Village to an even uglier brown refrigerator door in Los Angeles (“How do two people on opposite coasts whose houses we are eventually going to live in both choose brown refrigerators?” she’d asked Julian) until ugly refrigerator number two shuddered its last breath one August morning and they’d replaced it with a new one that was fancier and stainless steel and wouldn’t hold a magnet. She’d moved the photo to a bulletin board in the small enclosed sun porch they called “the office,” but the edges started to curl and so she’d put it in a drawer, safe from the ravages of time and the relentless attention of the California sun. She’d cleaned out all those drawers a couple of years ago, right after she got the part voicing Leona the saucy lioness on the animated show Griffith and they’d turned “the office” into “the studio,” a place she could record her voice-over work at home when she wanted. Where had she put all the stuff from those drawers? She would never throw away a photograph, but especially not that one.

“Don’t we already have a pile of presents for Ruby?” Julian asked, rummaging through his bedside table, trying to help but just creating more mess. Their daughter was graduating from high school that night and Flora wanted to slip the photo in a frame and give it to her. A sweet surprise.

“We can probably get rid of a lot of that stuff,” Flora said, eyeing the piles of junk Julian was extracting from his drawer and moving to the bed: an assortment of reading glasses, outdated computer cords, empty aspirin bottles, a few battered scripts. He would ignore her suggestion. After twenty years of marriage the lines had been drawn, the places where she was allowed to exert her desire for order and the places she learned to ignore.

“Hey! These will come in handy for Ruby.” Julian held up an impressive wad of euros, coiled and fastened with a rubber band. At the end of the month, Ruby was going to Spain with her boyfriend’s family, after which she would meet Flora and Julian in upstate New York at the house in Stoneham, the same house in the missing photo from so long ago.

“I wish we could retake the photo this summer,” Flora said. “If David and Margot were coming, we could.” Julian tossed the euros over to Flora’s side of the bed, pleased with himself. Three years ago, standing in front of the currency booth at Charles de Gaulle Airport, they’d argued about whether or not to exchange the euros back to dollars. She remembered exactly. It was ungodly hot in the terminal because of some kind of air-conditioning malfunction. The three of them were logy and irritable from indulgence—days of cheese and baguettes, foie gras nearly every night, the croissants, the chocolate, the wine.

Fifteen-year-old Ruby had been in a mood. “I am not being ungrateful. All I said is that the Parisians are pretty sniffy for people who can’t even get air-conditioning right. What’s the big deal?”

Ruby had never done well in the heat from the time she was a baby. Her early years in Greenwich Village during the summer were a nightmare. Ruby begging to leave the playground, refusing to wear a hat, her fair cheeks flushed red, the stinging heat rash between her meaty toddler thighs.

“Next year can we please go to the beach in July? Somewhere with air-conditioning, somewhere I’m not sweating through my clothes by noon?” She lifted one arm and gestured angrily toward the sweat stain at her armpit. “This blouse is ruined, Mom. It’s brand-new and I won’t find this silhouette in Los Angeles and it’s ruined.”

“Okay, okay.” Julian had placed a placating hand on Ruby’s shoulder. “Let’s find something cold to drink.” He had winked at Flora then, a signal, reassuring her that they were on the same side. They both heard in that moment how much Ruby sounded like Margot. Silhouette, sniffy—not Ruby’s vernacular.

That Ruby loved—worshipped—Flora’s best friend was a good thing. And it was no surprise that Margot, who had no children, and Ruby, who was an only child, were thick as thieves. The ruined blouse had been a gift from Margot, bought at a small boutique in the Sixth, not a place Flora would ever deign to shop. Too expensive. Too intimidating. She and Margot had had a testy exchange about it at dinner in a tiny bistro the previous night, where they’d probably been a little too drunk, a little too loud. Margot and her husband, David, had taken Ruby for the afternoon and then reappeared laden with shopping bags. Ruby was bright-eyed and high-spirited and not complaining about the heat for once.

“This is too much,” Flora said as Ruby opened bag after bag displaying her haul—the very sheer pink blouse, a pair of white gladiator sandals that Flora thought horrendous, a black scarf from some high-end designer covered with tiny skulls, a suede fringed handbag. “Is this in style now?” Flora said, running her fingers through the brown suede. “Mom,” Ruby said. “Obviously.”