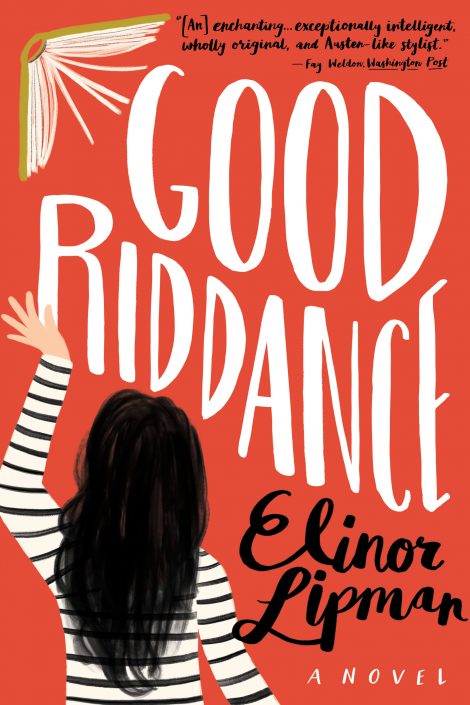 The delightful new romantic comedy from Elinor Lipman, in which one woman’s trash becomes another woman’s treasure, with deliriously entertaining results.

Daphne Maritch doesn’t quite know what to make of the heavily annotated high school yearbook she inherits from her mother, who held this relic dear. Too dear. The late June Winter Maritch was the teacher to whom the class of ’68 had dedicated its yearbook, and in turn she went on to attend every reunion, scribbling notes and observations after each one—not always charitably—and noting who overstepped boundaries of many kinds.

In a fit of decluttering (the yearbook did not,

The delightful new romantic comedy from Elinor Lipman, in which one woman’s trash becomes another woman’s treasure, with deliriously entertaining results.

Daphne Maritch doesn’t quite know what to make of the heavily annotated high school yearbook she inherits from her mother, who held this relic dear. Too dear. The late June Winter Maritch was the teacher to whom the class of ’68 had dedicated its yearbook, and in turn she went on to attend every reunion, scribbling notes and observations after each one—not always charitably—and noting who overstepped boundaries of many kinds.

In a fit of decluttering (the yearbook did not, Daphne concluded, “spark joy”), she discards it when she moves to a small New York City apartment. But when it’s found in the recycling bin by a busybody neighbor/documentary filmmaker, the yearbook’s mysteries—not to mention her own family’s—take on a whole new urgency, and Daphne finds herself entangled in a series of events both poignant and absurd. 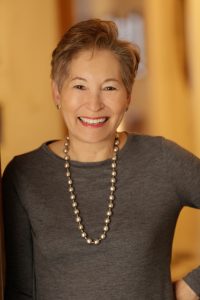 Elinor Lipman is the award-winning author of eleven novels, including The View from Penthouse B and The Inn at Lake Devine; one essay collection, I Can’t Complain; and Tweet Land of Liberty: Irreverent Rhymes from the Political Circus. She lives in New York City.

“A clever romantic comedy from a pro . . . The rollicking plot ultimately leads to romance, revealing this witty story’s warm and fuzzy heart.” —People

“[Lipman] has long been one of our wittiest chroniclers of modern-day romance. [Her] writing is brisk and intelligent, and if the plot of this novel is zanier than her usual fare, that too may show just how plugged-in she is to out farfetched times.” —Wall Street Journal

“The question of who gets to tell one’s own story lies at the heart of Lipman’s smart, sassy, and satisfying rom-com . . . Luckily for fans of contemporary women’s fiction, the answer is Lipman as she once again delivers a tightly woven, lightly rendered, but insightfully important novel of the pitfalls to be avoided and embraced on one’s path to self-discovery.”—Booklist

“Lipman’s satisfying latest is a worthy addition to her long lineup of smart, witty novels. . . a charming romantic comedy . . . with a stellar cast of supporting characters [. . . ] and intelligent and lyrical prose . . .  A delightful treat readers will want to savor.”—Publishers Weekly

“Fans of Lipman will cheer for a new novel in her signature style: funny, warm, sharp, smart, and full of love for family, no matter how flawed.”—Library Journal

“The sharp, smart wit of Elinor Lipman is a treasure and Good Riddance more than delivers with laugh out loud dialogue, wise social commentary, and thoughtful observations about love.”—Jill McCorkle, author of Life After Life

“Elinor Lipman always delights with her romantic comedies, and Good Riddance is Lipman at her best: funny, smart, and utterly charming.”—PopSugar

1. Why do you think Daphne chooses to get rid of the annotated yearbook that belonged to her mother? Were you surprised by her decision to get rid of it? Why or why not?

2. What is Daphne ashamed to admit about her marriage to Holden? Why does she believe that Holden married her? Does Daphne believe that she is a victim or does she accept any responsibility for her wrong turn? What does Daphne think can sometimes “take on the aura of romance” (14) and how did this affect her relationship with Holden? What does Daphne say that she had been waiting for ever since she learned of his true motive in marrying her?

3. What surprises Daphne about her father’s decision to move to New York? When Daphne confesses that she has gotten rid of the yearbook as they are painting his new apartment, how does her father react? How did he truly feel about his wife’s involvement with the Class of 1968 and her attendance at their reunions? Were you surprised by his response? Why or why not?

4. What does Daphne mean when she says that she is debating “whether or not [she] could riff on this possible paradox: her mother’s prudishness in light of the infidelity factor” (102)? Does the story brought to light by the yearbook influence or alter Daphne’s sense of her mother’s character? If so, how? What does she say that she now realizes about her mother? Does she ever come to terms with this?

5. What does Daphne find upsetting about Geneva’s podcast? Who is featured in the podcast and what story does Geneva seem intent on presenting? What does Geneva say that “every story needs” (139)? Is the story that Geneva wants to tell a true or accurate one?

6. What insights does Good Riddance provide on the topic of modern romance? How would you characterize Daphne’s relationship with Jeremy? What is dating like for her and for her father, who has recently become a bachelor? What does the book ultimately reveal about love and relationships?

7. What does the book suggest about the topic of ownership? How is ownership determined? How does ownership apply to art and to storytelling? Do you think that Geneva had a right to the yearbook and the stories that it contained? Why or why not?

9. Explore the motif of truth. Why does Holly accuse Daphne of not wanting to go near the truth? Do you think that her assessment is correct? Where in the book do readers find evidence either refuting or supporting this? What other characters are caught between truth and lies? What motivates the characters to say things that are not true? Does truth ultimately prevail?

10. What does Jeremy decide to write about for the stage? Who does he believe should be the star of his show? How does Daphne respond to the work that Jeremy has created? Do you think that her response to the work is hypocritical? Why or why not?

11. How did you feel about the novel’s closing lines?

12. What were some of your favorite lines or moments from the book? Which were the funniest? Elinor Lipman has been called “a diva of dialogue” (People). Do you agree?

13. Elinor Lipman’s work is often compared to that of Jane Austen for its satirical look at contemporary society. What does Good Riddance reveal about our own society and how does the author’s use of elements of comedy and the absurd help to reveal these points or observations?

14. What are some of the questions that were raised by the annotated yearbook? Are any of these questions answered at the story’s conclusion? What ultimately becomes of the yearbook?

The Grateful Class of ’68

For a few weeks after my mother’s death, I was in possession of the painstakingly annotated high school year-book that had been dedicated to her by the grateful class of 1968.

Yes, she’d been their English teacher and yearbook advisor, but that didn’t explain her obsessive collecting of signatures and tributes next to every senior’s photo. I could picture her — age twenty-three, her first job after college, roaming the corridors of Pickering High School, pen and book in hand, coaxing the shyest, least engaged boy or girl to sign — Write anything. I want to remember every one of you. Could you personalize it, just a few words?

But there would be more — her own embellishments, her judgments and opinions, written next to those photos in her small legible hand, a different color ink (red, green, blue) for several milestone reunions, which she attended compulsively, starting with the fifth and continuing until her last, their forty-fifth.

Her margin notes were coded but easily deciphered: “M” for married. “S” for single. “D” for dead; “DIV” for divorced. “DWI,” said a few. “AIDS?” suggested one notation. “Same dress she wore at 15th” my mother recorded. “Very plump” was one of her milder put-downs. “Braces.” “Pregnant.” Occasionally, “Still pretty.” “Looks older than I do” was one of her favorite notes. “Still holds PHS record for 100-yd. dash,” said one. And “danced w. him” appeared often.

Had I known about this project as it was happening? I hadn’t. Several reunions were held before I was born, and later ones, at-tended even after she retired, weren’t discussed with her two daughters. After all, we might know some of these graduates as the parents of our friends or our own teachers or custodians or police officers or panhandlers, townspeople still.

A handwritten codicil on the last page of my mother’s will said, “My daughter Daphne will take possession of the Pickering High School’s yearbook, The Monadnockian.” And nothing more.

I took it back with me to Manhattan, where it stayed on my shelf for a month until I read a magazine article about decluttering.

The test? Would I ever reread this novel, these college text-books, these magazines? Did I really need a Portuguese-English dictionary? What about the panini press and my dead Black-Berry? The expert recommended this: Hold the item in question, be it book or sweater or socks or muffin tin, to your chest, over your heart, and ask yourself, Does this thing inspire joy?

I hugged the yearbook. Nothing. Well, not nothing; worse than that: an aversion. Apparently, I didn’t want, nor would I miss, this testimony to the unsympathetic, snarky side of my mother’s character.

The best-selling decluttering wizard said the property owner had to be tough, even ruthless. I certainly was that. Good-bye, ugly white-vinyl, ink-stained yearbook with your put-downs and your faint smell of mildew! Maybe it was my mother’s legacy and a time capsule, but it had failed to stir emotion in my bosom. Possessing too much stuff anyway, in a cramped apartment, book-shelves overflowing, I threw it out. Or rather, being a good citizen, I walked it down the hall to my building’s trash closet, straight into the recycling bin.

I’d never met Geneva Wisekorn despite our residing at opposite ends of the same hallway. Our introduction came in the form of a note slipped under my door announcing, “I found something that belongs to you. Are you home?” followed by an email address and phone, office, and mobile numbers. My wallet? My keys? I checked my pocketbook. All there. Had a misdelivered piece of mail or dropped glove been traced back to me? I went to my laptop and wrote to this seemingly thoughtful stranger, asking what possession of mine she’d found.

She wrote back immediately. “A high school yearbook. We need to talk!”

No, we didn’t. I hit reply and wrote, “Thanks anyway, but I recycled that,” then added a postscript — “It has no meaning or value, sentimental or otherwise” — in case she was looking for a reward.

My first mistake: I sent it. Immediately, my phone rang. After my wary “Hello,” I heard, “I think you’ll be very interested in what I have to say.”

I asked how she knew the yearbook, which I now decided I needed back, belonged to me.

“Because I found it with magazines that had your name on the subscription labels.”

I said, “I’d never forgive myself if a yearbook with all that personal stuff written in it got into the hands of a stranger.”

“Then why’d you throw it out?”

“I thought it would go to some landfill! Or get turned into what-ever recycled paper gets turned into.”

“I know the rules. If it’s trash left at the curbside or at the dump, the possessor has relegated ownership.”

The possessor has relegated ownership? Was I talking to this ragpicker’s lawyer?

“Finders keepers, in other words?”