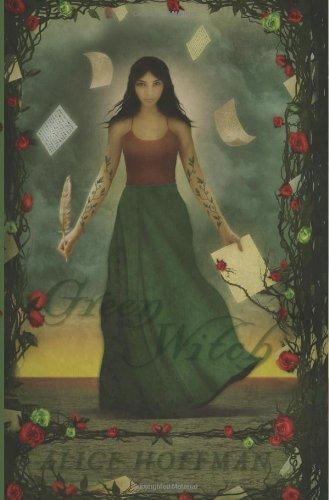 In her spellbinding new novel, Alice Hoffman shows us how loss and grief can be transformed into action, love, and hope.  It is the tale of Green, who must learn to open herself to others in a post-disaster world.  To do so, she must collect the stories of a number of “witches” and continue to write her own.

In her spellbinding new novel, Alice Hoffman shows us how loss and grief can be transformed into action, love, and hope.  It is the tale of Green, who must learn to open herself to others in a post-disaster world.  To do so, she must collect the stories of a number of “witches” and continue to write her own.

Alice Hoffman is the highly acclaimed author of twenty novels for readers of all ages, including Illumination Night, At Risk, Seventh Heaven, Practical Magic, Here on Earth, The Foretelling, Incantation, and, most recently, The Third Angel and The Story Sisters. Her previous novels for Scholastic Press are Aquamarine, which was made into a major motion picture, Indigo, and Green Angel, which Publishers Weekly, in a boxed, starred review, called “achingly lovely.” She lives with her family outside of Boston. Visit her at www.alicehoffman.com.

“… Hoffman writes in lyrical, stripped-down poetry that distills both magic and elemental experience into essential, unforgettable words. Teens will want to talk about everything here: the potent emotion and loss; the 9/11 parallels; and the violent, eye-for-an-eye ending.”—Booklist

“Hoffman’s sparse prose encapsulates the pain of grief and the resiliency of the human spirit, and suggests that love is a stronger force than tyranny. Haunting, philosophical, and filled with poetic imagery. this book will leave an indelible mark”
—Publishers Weekly (starred review).

The love of books and reading is exemplified in the story Green’s teacher dictated to her. “It was a list of all the novels she had loved, along with a description of exactly where she’d been when she read each one.” We all are profoundly affected by the books we read. Do what Green’s teacher did. Make a list of your favorite novels and the circumstances you were in when you read each one. Share the list with your group. Then pick a book that is on another’s list to read.

Survivors of catastrophes are often plagued with guilt. They ask, “Why did I survive while my loved ones perished?” All of the survivors in Green Witch have survivor guilt. How do they express these feelings?

Because they know she is a writer, people in the village come to Green to tell her the stories of their lives. “I felt it was my duty to collect these stories as if they had grown in my garden.” We see from reading Green Witch that stories affect both the teller and the listener. All people have stories. Pair up with someone in your group and tell your story. Your partner should take notes. Then reverse roles. You become the listener. What did you learn about each other? How did it feel to tell your story? How did listening to your partner’s story affect you?

Throughout Green Witch, Alice Hoffman reminds us of the importance of story and of literature in our lives. She does this by showing how people value Green’s listening and recording their stories. She underlines this value by setting book burning as a tenet of the Horde’s beliefs. Find other instances of how Alice Hoffman articulates this theme in the novel. Is it a value you share?

We learn in Green Witch that the disaster that destroyed the city and killed Green’s family as well as countless others in the novel Green Angel was the result of a terror attack by a group called the Horde. What do you know about the Horde? What was their motivation for the attack? What are their views about modern machinery, free thought, books, and women? What parallels can you find between the Horde and present-day terrorist groups?

It has been a year since the Horde’s attack on the city. The village community lives in constant fear of another terror attack. Discuss with your group how the fear of a terror attack can be just as devastating as the attack itself.

Finding Diamond was not enough to sufficiently complete Green’s healing and her story. She had to regain the promise of the future. Living in the present was not enough. How do you feel about this? Talk about living for the moment and looking to the future.

“Once I’d feared that when I finally wrote about the day my family left for the city, it would be the end of the story, the very last page. But that isn’t the way it turned out.” Look back to the start of this discussion guide. Alice Hoffman also thought that her story had ended, but discovered––through her readers––that there was more to tell. Both author and protagonist have found out the same truth. What is that truth?

Many of Alice Hoffman’s books are in the genre of magical realism. Here happenings or circumstances straddle a line between things that are explainable as natural and things that are fantastical. In Green Witch there are many instances where we as readers are caught wondering if what has occurred really happened. An example is Green’s description of the way her garden grows. “It had turned to chalk and ashes after the city across the river burned down…Now whatever I plant grows overnight.” Do you think the author means for us to take this literally or figuratively? Or is it simply an expression of Green’s perception of her garden? Is the way her garden flourishes real or magical? Find other examples of magical realism in the book and debate whether they are real or magical.

Green Witch is told in five chapters, each named for one of the witches in the novel. Four of the chapters have a two-part introductory line that offers a principle that guides Green’s actions. The last chapter has only half of a line—”This is what I believe…” Finish the line. What does Green believe now about the nature of love, her place in the world, and the future? What do you believe?

After Green’s old neighbor tells her to believe in dreams, she can’t stop thinking about the future. She wonders whether she had had a spell cast on her. What do you think? Is Green bewitched, or was what her neighbor said just good sound advice? What advice does Green get from each of the other witches? How does that advice guide her? How can you apply their advice to your own life?

Each of the witches Green visits gives her a small gift for her journey. What are they? Discuss the significance of each and how each helps her to accomplish her quest.

“Heather disappeared into the meadow… pushing at the cannon in the field, She lights the fuse….” Heather Jones, not Green, is the one who destroys the Horde. Why does Alice Hoffman have Heather defeat them instead of having Green or Diamond do it?

Green has begun the process of forging a new life for herself, but she is still grieving and bitter. Chronicle the stages of her grief, beginning when she became Ash in Green Angel, and follow through the events in Green Witch.

“I am the first to make paper again…I add elements depending on the person whose story needs telling.” Green captures what is important to the teller in making paper for their story. If Green was going to write your story, what would she put into the paper to catch the essence of you?

Green is conflicted about her feelings for Diamond. “Is he a prisoner or a guard? Is he my worst enemy or still my beloved?” From bitterness to hope, Green sets out on her quest to find Diamond. How has she prepared herself emotionally for the possibility of being disappointed by the outcome?

Whether Green acknowledges it or not, she is also searching for the future that was denied to her. When does she come to the realization that her life cannot be complete without a belief in the future?

The Finder is thirteen years old. Green herself is not yet seventeen. They are your age and the ages of your friends. Yet they are facing very adult challenges; they are self-sufficient; they have great responsibilities. How would you behave in their circumstances? How about your friends? What character traits were needed to face what they were up against?

‘Lately, there has been talk of witches in our midst, women they call the Enchanted. People have suspicious minds, especially in difficult times.” Throughout literature and history, such suspicions have often led to blaming women for bad happenings––labeling these women as witches. This is true of the “witches” in Green Witch. If they were to go on trial and you were their lawyer, how would you defend them? What actions and character traits would you present in their defense?