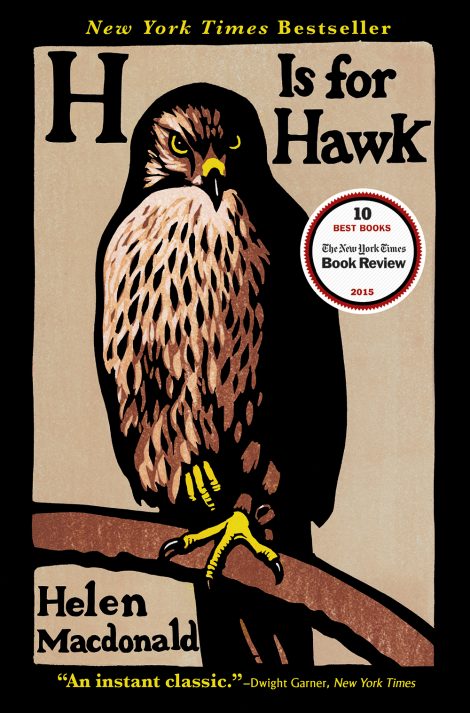 H IS FOR HAWK

When Helen Macdonald’s father died suddenly on a London street, she was devastated. An experienced falconer—Helen had been captivated by hawks since childhood—she’d never before been tempted to train one of the most vicious predators, the goshawk. But in her grief, she saw that the goshawk’s fierce and feral temperament mirrored her own. Resolving to purchase and raise the deadly creature as a means to cope with her loss, she adopted Mabel, and turned to the guidance of The Once and Future King author T.H. White’s chronicle The Goshawk to begin her challenging endeavor. Projecting herself “in the hawk’s wild mind to tame her” tested the limits of Macdonald’s humanity and changed her life.

When Helen Macdonald’s father died suddenly on a London street, she was devastated. An experienced falconer—Helen had been captivated by hawks since childhood—she’d never before been tempted to train one of the most vicious predators, the goshawk. But in her grief, she saw that the goshawk’s fierce and feral temperament mirrored her own. Resolving to purchase and raise the deadly creature as a means to cope with her loss, she adopted Mabel, and turned to the guidance of The Once and Future King author T.H. White’s chronicle The Goshawk to begin her challenging endeavor. Projecting herself “in the hawk’s wild mind to tame her” tested the limits of Macdonald’s humanity and changed her life.

Heart-wrenching and humorous, this book is an unflinching account of bereavement and a unique look at the magnetism of an extraordinary beast, with a parallel examination of a legendary writer’s eccentric falconry. Obsession, madness, memory, myth, and history combine to achieve a distinctive blend of nature writing and memoir from an outstanding literary innovator.

Helen Macdonald is a writer, poet, illustrator, historian, and naturalist, and an affiliated research scholar at the Department of History and Philosophy of Science at the University of Cambridge, where she teaches undergraduate and graduate courses. She also worked as a Research Fellow at Jesus College, Cambridge. She is the author of a cultural history of falcons, titled Falcon, and three collections of poetry. As a professional falconer, she assisted with the management of raptor research and conservation projects across Eurasia.

“Helen Macdonald’s beautiful and nearly feral book, H Is for Hawk, reminds us that excellent nature writing can lay bare some of the intimacies of the wild world as well. Her book is so good that, at times, it hurt me to read it. It draws blood, in ways that seem curative.” —Dwight Garner, New York Times

“One of a kind . . . Macdonald is a poet, her language rich and taut. . . . As she descends into a wild, nearly mad connection with her hawk, her words keep powerful track. . . . [She] brings her observer’s eye and poet’s voice to the universal experience of sorrow and loss.” —Barbara Brotman, Chicago Tribune

“Had there been an award for the best new book that defies every genre, I imagine it would have won that too. . . . Coherent, complete, and riveting, perhaps the finest nonfiction I read in the past year.” —Kathryn Schulz, New Yorker

“Extraordinary . . . indelible . . . [it contains] one of the most memorable passages I’ve read this year, or for that matter this decade . . . Mabel is described so vividly she becomes almost physically present on the page.”—Lev Grossman, TIME

1. In the book’s opening pages, Macdonald writes, “The wild can be human work” (p. 8). She wrote this sentence to explain how British goshawks were literally brought back from extinction by falconers who imported birds from the continent that were lost or released and subsequently bred. What other meanings could this line have? What does this tell us about the kind of narrator Helen will be?

2. Helen writes about a time when she was nine and impatient to see hawks. Her father explained, “[W]hen you wanted to see something very badly, sometimes you had to stay still, stay in the same place, remember how much you wanted to see it, and be patient” (p. 10). How well is Helen served by this advice throughout the book?

3. Macdonald was eight years old when she first reads T. H. White’s The Goshawk, a book that proves a formative experience. She initially dislikes the book (p. 30): “Why would a grown-up write about not being able to do something?” How does Macdonald’s views on White’s book evolve over time?

4. “The book you are reading is my story,” Macdonald writes. “It is not a biography of Terence Hanbury White. But White is a part of my story all the same. I have to write about him because he was there” (p. 38). What does Macdonald mean? How does understanding White’s life inform her own journey? How does our understanding of White’s book help us understand her own?

5. When Macdonald arranges to buy her hawk, she’s initially shown the wrong bird. When the correct bird appears, she notes, “I looked into her eyes and saw something blank and crazy in her stare. . . . This isn’t my hawk” (p. 55). Why does Macdonald change her mind?

6. Macdonald writes, “What we see in the lives of animals are lessons we’ve learned from the world” (p. 60). Through closely observing her hawk’s life, what lessons does Helen ultimately learn from the world?

7. When Macdonald first trains her hawk to become accustomed to her presence, she explains that “making yourself disappear is the greatest skill in the world” (p. 68). Later, Macdonald says about being thrilled that her hawk has forgotten she’s there because it’s a sign of acceptance: “But there was a deeper, darker thrill. It was that I had been forgotten” (p. 73). Why does this excite Macdonald?

8. After living several days with her hawk in her flat, Macdonald observes, “I was turning into a hawk” (p. 85). What does Macdonald mean? How does she explain her “transformation”?

9. Macdonald goes through various emotional stages training her hawk. On one particular day, within a couple hours she goes from feeling like a “beneficent figure” to “the worst falconer in the history of the world.” Ultimately, she realizes, “I have lost the ability to disappear” (p. 93). How critical was this loss at this stage of her training? How important of a turning point is this for Macdonald?

10. A big step in Macdonald’s hawk training is “walking” Mabel in public. Macdonald fears what Mabel’s encounter with people will be like: “They are things to shun, to fear, to turn from, shielding my hawk” (p. 100). Is Macdonald also shielding herself? Why or why not?

11. Macdonald writes that each picture her father took was “a record, a testament, a bulwark against forgetting, against nothingness, against death” (p. 71). Later, she looks just once at the last photo her father took before he died. “[A]n empty London street . . . a wall tipped sideways from the vertical and running into the distance; a vanishing point of sallow, stormy sky.” It is a photo that she can “never stop seeing” (p. 106). Does Macdonald’s memory of this photo serve as a bulwark against forgetting her father? Or against her father’s death?

14. As Macdonald continues with Mabel’s training, she explains, “I felt incomplete unless the hawk was sitting on my hand: we were parts of each other. Grief and the hawk had conspired to this strangeness” (p. 135). How great a role does grief play in making Macdonald feel complete with Mabel?

15. At key points in the narrative, Macdonald is able to rely on various friends to help her through a specific emotional challenge or with Mabel’s training. How important is human friendship to Macdonald as she travels through her grief? Is it more of a challenge for her to recognize human contributions to her healing than Mabel’s? Why or why not?

16. Macdonald quotes White from his dream diary, “Need to excel in order to be loved.” Then she adds, “But there is an unspoken coda to that sentence. What happens if you excel at something and discover you are still unloved?” (p. 146) How much does this sentence pertain to White? Macdonald? Are White and Macdonald unloved, or are they incapable of acknowledging love?

17. Macdonald writes that falconry is not, as she quotes Professor Tom Cade, “high-intensity birdwatching” bur rather “more like gambling.” She says, “You feel safe because you are entirely at the world’s mercy” (p. 177). What does Macdonald mean? Does Macdonald ever reach a place of true emotional safety in the book?

21. After her father’s memorial service, Macdonald thinks about her decision to “flee to the wild. It was what people did. The nature books I’d read told me so.” Macdonald realizes that this was “a beguiling but dangerous lie” that inevitably harmed Mabel. “I’d fled to become a hawk, but in my misery all I had done was turn the hawk into a mirror of me” (p. 218). How much responsibility does Macdonald bear for religiously following her nature books’ advice? Is Macdonald expressing enough empathy for her decisions?

22. Macdonald realizes after having trained Mabel that “I love Mabel, but what passes between us is not human” (p. 223). What has passed between Macdonald and Mabel? If it’s not human, what is it?

23. When molting season arrives, Macdonald arranges for a spare aviary to accommodate Mabel at a friend’s house some distance away. There’s an earthquake the night before she drops her off. A panicked Macdonald checks on Mabel, thinking Mabel will be as terrified as she is. Instead, she finds Mabel calm and asleep. “I had thought the world was ending, but my hawk had saved me again, and all the terror was gone” (p. 278). Has Mabel truly saved Macdonald in this moment? At this stage in their relationship, how much credit does Macdonald deserve for saving herself?

25. Macdonald reveals at the end of her acknowledgments page that Mabel succumbed to a sudden, untreatable infection after the main events in her book. Is Helen ready for a life without Mabel? Why or why not?