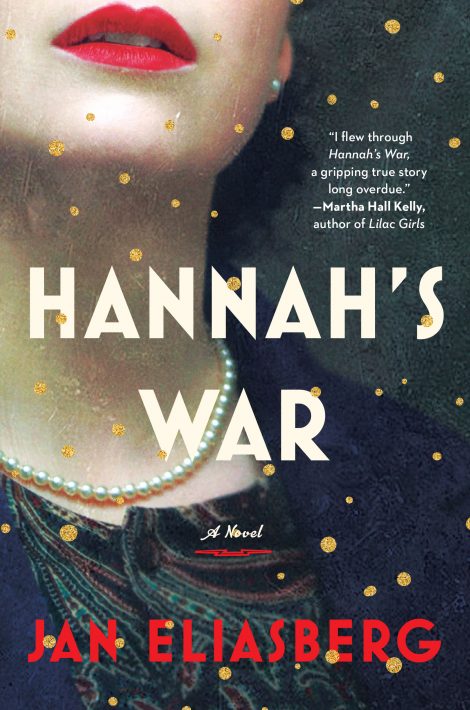 A “mesmerizing” re-imagination of the final months of World War II (Kate Quinn, author of The Alice Network), Hannah’s War is an unforgettable love story about an exceptional woman and the dangerous power of her greatest discovery.

Berlin, 1938. Groundbreaking physicist Dr. Hannah Weiss is on the verge of the greatest discovery of the 20th century: splitting the atom. She understands that the energy released by her discovery can power entire cities or destroy them. Hannah believes the weapon’s creation will secure an end to future wars, but as a Jewish woman living under the harsh rule of the Third Reich,

A “mesmerizing” re-imagination of the final months of World War II (Kate Quinn, author of The Alice Network), Hannah’s War is an unforgettable love story about an exceptional woman and the dangerous power of her greatest discovery.

Berlin, 1938. Groundbreaking physicist Dr. Hannah Weiss is on the verge of the greatest discovery of the 20th century: splitting the atom. She understands that the energy released by her discovery can power entire cities or destroy them. Hannah believes the weapon’s creation will secure an end to future wars, but as a Jewish woman living under the harsh rule of the Third Reich, her research is belittled, overlooked, and eventually stolen by her German colleagues. Faced with an impossible choice, Hannah must decide what she is willing to sacrifice in pursuit of science’s greatest achievement.

New Mexico, 1945. Returning wounded and battered from the liberation of Paris, Major Jack Delaney arrives in the New Mexican desert with a mission: to catch a spy. Someone in the top-secret nuclear lab at Los Alamos has been leaking encoded equations to Hitler’s scientists. Chief among Jack’s suspects is the brilliant and mysterious Hannah Weiss, an exiled physicist lending her talent to J. Robert Oppenheimer’s mission. All signs point to Hannah as the traitor, but over three days of interrogation that separate her lies from the truth, Jack will realize they have more in common than either one bargained for.

Hannah’s War is a thrilling wartime story of loyalty, truth, and the unforeseeable fallout of a single choice. 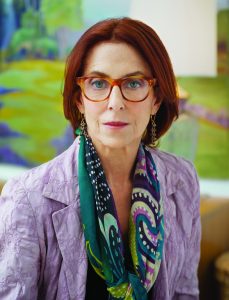 Jan Eliasberg is an award-winning writer/director. Her prolific directing career includes dramatic pilots for CBS, NBC, and ABC, such as Miami Vice and Wiseguy; countless episodes of television series, including Bull, Nashville, Parenthood, The Magicians, Blue Bloods, NCIS: Los Angeles, Supernatural, and dozens of others; as well as the feature film Past Midnight, starring Paul Giamatti, the late Natasha Richardson, and Rutger Hauer.

Eliasberg also has a storied career as a screenwriter, writing films driven by strong female leads, including Fly Girls about the Women Air Service Pilots in WWII for Nicole Kidman and Cameron Diaz at FOX 2000, among many others.

“Jan Eliasberg knows how to open big with strong suspense and wry humor and take us for a hurtling ride through one of America’s most complex moments. The wonderful characters of Hannah’s War bring together a moving love story, a high-stakes mystery and a fascinating look into the moral compass of an exceptional woman.”—Amy Bloom, author of White Houses

“Eliasberg moves effortlessly between Hannah’s past and present to deliver a historical love story full of intrigue and suspense. Hannah’s War shines a much-needed light on one of the most influential women in history.”—Booklist

“An exhilarating war thriller, Hannah’s War moves at breakneck pace between 1930s Berlin and 1940s New Mexico. A paean to Lise Meitner, it is the compelling portrait of a woman who combined a lively scientific curiosity with an impassioned personal ethic.”—Historical Novels Review

“Hannah’s War is a gripping cat-and-mouse tale of love, war, deception, and espionage you won’t be able to put down. Jan Eliasberg elevates the spy thriller with her clear, fierce admiration for the women of the past who refused to be edged out of the world of scientific discovery. Mesmerizing.”—Kate Quinn, author of The Alice Network

“I flew through Hannah’s War, a gripping true story long overdue to be told, of a brilliant woman physicist working to develop the first atomic bomb and the secret she fights to protect.”—Martha Hall Kelly, author of Lilac Girls

“At the center of this novel you will find love and physics entangled together in the life of a heroic woman whose bravery and brilliance helped to change the course of modern history. Jan Eliasberg’s extraordinary novel is a fictionalized version of what really happened, and despite its serious subject matter, the story moves forward with great speed and power, giving off both heat and light. This is a great story about a woman of genius.”—Charles Baxter, author of The Feast of Love

1. Jan Eliasberg has worked for years as a screenwriter and film director. How do you think her experience in film has influenced Hannah’s War? Were there particular scenes or locations you were able to visualize distinctly? Who would you cast as Hannah, Stefan, and Jack?

2. Jack Delaney hides his identity for much of the novel. Although he is American, he is concerned that his religious background will negatively affect his career prospects. His colleague Aaron Epstein is open about his Jewish faith. How is Epstein treated differently? How do you think American attitudes toward Judaism have changed since 1940? Are there identities or opinions that you hide in your daily life? What compels you to withhold personal information?

3. When Jack first arrives at Los Alamos, he believes that the Axis informant is a male scientist. After registering that Hannah is a woman, he muses she is “a beautiful woman working in a world of lonely men.” How does Hannah’s gender influence her research and her presence in various laboratories?

4. What does the behavior of the other working women in the story—Alice Rivers at Los Alamos and Karin Hoenig at the Kaiser Wilhelm Institute in Berlin—say about gender norms in the 1930s and 1940s? How do their beliefs about their roles as women and their behavior shed light on Hannah? Were you at all surprised by the lack of or amount of agency these women were afforded?

5. Were you surprised by the revelation that Ulrike Diebner and Lotte Scheer were romantic partners? Contrary to many beliefs, Weimar Berlin was actually quite progressive; there were lesbian and gay magazines and newspapers as well as lesbian and gay clubs that were well known and well patronized. As the National Socialists took power, they marked homosexuals as “deviant” and lesbians as “amoral.” The story of lesbians in Berlin and under the Nazis is one we rarely hear about; do the characters of Ulrike and Lotte intrigue you enough to learn more about that lost history?

6. Stefan Frei is a complex character, and Eliasberg gives us good reason to doubt his loyalty throughout the novel. Did you trust Stefan to keep Hannah’s secrets? German citizens are frequently portrayed negatively in Americans’ retelling of World War II stories. What biases did you carry when you first met Stefan? How has your attitude changed since finishing the novel?

7. During her final months in Berlin, Hannah was almost constantly confronted with Nazi imagery and propaganda. In one scene, when Hannah calls Gregor Stern’s house, she is forced to repeat “Heil Hitler” to the housekeeper lest she be found out as a Jew. How would you respond in that situation? How might you be complicit in racism in today’s sociopolitical climate?

8. Hannah’s brilliant research contributes to the atomic bombing of Hiroshima and Nagasaki, devastating events which helped to end World War II but also cost hundreds of thousands of innocent lives. Stefan and Hannah are deeply affected by the bombings and feel responsible for the deaths of many innocent people. How do you think Hannah reconciles those feelings of guilt? How do Americans continue to process this violent history? How does the threat of nuclear attack influence foreign policy in the twenty-first century?

9. Scientist Peter Reichl has organized a petition calling for ethical oversight of how the bomb is going to be used; in fact this dissent is one of the reasons that Jack is sent to Los Alamos to find a spy. How did you understand the different levels of moral questioning and dissent in the characters of Reichl, Oppenheimer, and General Groves? Have you ever been in a position in which you were working for a cause or organization and came to question the ethics of the group? How did you handle those moral dilemmas?

10. Jack’s investigation of Hannah becomes complicated when he begins to develop romantic feelings for her. Do you believe Hannah deliberately seduced Jack, or was she sincerely interested in getting to know him better? Were you surprised by how intimate and familiar their relationship became? Did their ending feel satisfying?

11. Sabine is a rebel, and she distributes controversial anti-fascist political leaflets throughout Berlin. She taunts Hannah’s commitment to the resistance by saying, “It’s hard to fight with your eyes closed.” Did you sympathize with Sabine’s radical activism? How would you fight oppression if you were in her position?

12. One of Eliasberg’s goals in writing Hannah’s War was to shed light on the story of Lise Meitner, the Austrian physicist who discovered nuclear fission. Although denied her share of the Nobel Prize (which was her due), she was an important pioneer for women in science. There has been a huge push for more female scientists in recent years as the technology industry continues to blossom. Why do you think women are discouraged from pursuing STEM positions, and what can we do to inspire more young girls to join the fields?

13. Do you think that Hannah, as a woman, brings a different perspective to her research than the men in her field?

14. There are a number of instances in Hannah’s War in which the United States makes morally questionable decisions: the Americans chose not to bomb the train tracks leading into Auschwitz (although they’d located them on aerial maps); they turned away the SS St. Louis, carrying hundreds of Jewish refugees; and, finally, the American military deliberately left Hiroshima and Nagasaki untouched so they could be used as civilian targets for the atomic bomb. How do you feel about this morally ambiguous view of America? How does that square with the accounts you studied in your history books?

15. Hannah’s War ends in 1949, and we learn that Hannah and Stefan have decided not to have children. Where do you imagine their story is headed? What might Hannah think of the world today?

16. In the last field note—the book’s very last chapter—it’s revealed that Sabine, now called by her assumed name Gisella Proust, is not only alive but has also been working with the Mossad. How do you think the character you knew as Sabine became an Israeli spy? Do you think Hannah would approve of the way her cousin developed and grew? Are you interested in that story?