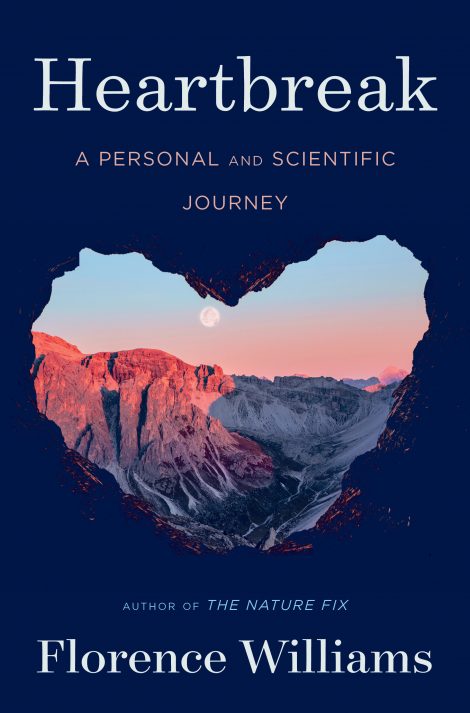 A Personal and Scientific Journey

Florence Williams explores the fascinating, cutting-edge science of heartbreak while seeking creative ways to mend her own.

When her twenty-five-year marriage unexpectedly falls apart, journalist Florence Williams expects the loss to hurt. What she doesn’t expect is that she’ll end up in the hospital, examining close-up the way our cells listen to loneliness. She travels to the frontiers of the science of “social pain” to learn why heartbreak hurts so much and why so much of the conventional wisdom about it is wrong.

Searching for insight as well as personal strategies to game her way back to health,

Florence Williams explores the fascinating, cutting-edge science of heartbreak while seeking creative ways to mend her own.

When her twenty-five-year marriage unexpectedly falls apart, journalist Florence Williams expects the loss to hurt. What she doesn’t expect is that she’ll end up in the hospital, examining close-up the way our cells listen to loneliness. She travels to the frontiers of the science of “social pain” to learn why heartbreak hurts so much and why so much of the conventional wisdom about it is wrong.

Searching for insight as well as personal strategies to game her way back to health, Williams tests her blood for genetic markers of grief, undergoes electrical shocks in a laboratory while looking at pictures of her ex, and ventures to the wilderness in search of awe as an antidote to loneliness. For readers of Wild and Lab Girl, Heartbreak is a remarkable merging of science and self-discovery that will change the way we think about loneliness, health, and what it means to fall in and out of love 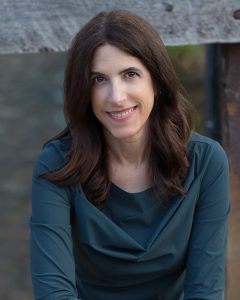 Florence Williams is the author of Breasts, winner of the Los Angeles Times Book Prize, and The Nature Fix. A contributing editor at Outside magazine, her writing has appeared in the New York Times, National Geographic, and many other outlets. She lives in Washington, DC.

“This surprisingly frank and funny book is what happens when a formidable science journalist turns her powers of observation and inquiry on her own broken heart.”–Bonnie Tsui, author of Why We Swim

“[A] show-stopping, offbeat story about the science of heartbreak… Unflagging research—[Williams] even flies to London to interview Britain’s first ‘minister of loneliness’—and the author’s vulnerability make for an impressive and moving survey. This is a courageous, whirlwind tale of healing and self-discovery.”–Publishers Weekly (starred review)

“I tore through this book, unable to do anything else. Even sleep. Florence Williams has taken the most common form of psychic pain––heartbreak, her heartbreak––and transformed it into a meditative masterwork on what it means to live a good life, with biological and genetic markers and dozens of scientific studies to back up her claims. Awe: remember this word. You will feel it at the end of this book, and it could save your life.”–Deborah Copaken, author of Ladyparts

“What a powerful book. Williams captures the heartache of divorce and the crooked road back to living. Colorful, imaginative and poignant—Heartbreak tells a gripping story of courage, sex, and adventure packed with all the newest hard science on romance and attachment. I’ve studied love for over 40 years and I was taking notes. It’s a magnificent, wise, and remarkable read!”–Helen Fisher, author of The Anatomy of Love

“Heartbreak by Florence Williams is a graceful account of losing a marriage and finding another way of being. With vulnerability and veracity, Williams seeks various modes of understanding the physicality of loss. Whoever has felt the blistering heat of a broken heart will thank Florence Williams for a clear moving river of discoveries.”–Terry Tempest Williams, author of Erosion

How (Almost) Risking My Life Healed My Heartbreak

A few months after my husband moved out of our house in the spring of 2017, I found myself clipped into a metal cable that ran a thousand vertical feet to the top of a cliff. My teenage children, a few friends, and I were setting out to climb an Italian via ferrata (literally, an “iron path”). That cable was our safety system, but we would be pulling our own bodies hand over foot into the clear Dolomite sky.

The climb took hours. Halfway up, the husband of the friend who had urged us on this adventure started belting out his version of Simon & Garfunkel: “Hello, cable, my old friend, I’ve come to climb on you again.” I’d been apprehensive, but once on the cliff, I felt stronger than I had expected. I was embodying the metaphors of climbing: taking one small step at a time, lifting myself up, not looking back, slowly gaining the upper air.

I scanned the range and caught myself feeling focused and excited and—dare I say it—happy. I knew it wouldn’t last, but the glimpse was startling. The only emotions I’d experienced for most of the past year were despondency and dread.

I met the man who would become my husband of 25 years on a college hiking trip. I was a freshman; he was a senior. I’d been an outdoorsy kid, and I was drawn to his rugged competence on the trail, in a kayak, and on a pair of skis. He taught me how to belay and not camp under dead tree limbs or in flash-flood zones. The world felt safer with him by my side. For two decades, we lived in the Rocky Mountains, working hard—in journalism (me) and in environmental conservation (him)—and venturing often onto rivers and snowy slopes.

Eventually, we moved to Washington, D.C., for his career, and our outdoor explorations got back-burnered to work, parenting, and then, toward the end, couples therapy. Without our shared adventures, we’d lost some magic. I still thought we had a bond worth saving, a family worth keeping together, but he wanted something else. I was devastated.

I couldn’t believe how much it hurt—how scared I was to lose both him and my sense of the future. I was 50 years old, and I’d never been single as an adult. As psychologists who specialize in attachment will tell you, when someone you love rejects you, you feel that perhaps you are unworthy of love. Despite a career, two loving kids, and devoted, lifelong friends, my self-esteem had been battered. My emotional pain registered as physical distress: My chest was tight, I was having trouble sleeping, I was losing weight, and I felt like I was plugged into a faulty electrical socket.

When my friend Betsy suggested we gather up our kids and go biking and hiking in the Dolomite mountains of Northern Italy, I groaned. Betsy is a major athlete, and all I wanted to do was collapse onto a pile of very soft blankets for the foreseeable future. But I also knew that probably wasn’t a great plan. By this time, I’d researched the stats: A third of women over 40 experience depression following divorce. Early mortality, illness, and destructive cycles of loneliness also afflict the heartbroken. Betsy, a friend for more than two decades, knew what I needed better than I did.

We flew into Venice and walked around the narrow streets and canals in a haze after our overnight flight. We ate heaps of pasta with calamari and then slept like the dead. It was a better night’s sleep than I’d had in five months. The next day we took a bus to Cortina, a picturesque ski town ringed by jagged peaks. Another miraculous sleep. By the next morning, I was ready for our 25-mile ride to the Parco Naturale Dolomiti. We let the teenagers rent electric bikes but no such luxury for the adults; Betsy wanted the full burn in our legs and the maximum oxygen coursing through our lungs. I had to admit, the exercise felt good, mostly because it made me feel alive. It’s harder to shut down emotionally when your body is working this hard to deliver glycogen to every muscle and organ, especially your frozen heart. And the awe-inspiring scenery couldn’t help but pull me out of the sad, boring soundtrack of my thoughts.

On the way back, we ventured off the paved bike path to try out a single-track forested trail. It wasn’t technically difficult, but its narrow and winding course made it seem like we might slide into Snow White’s bower at any moment. Just when we thought we were lost, a portly man in orange Lycra came trouncing through on his mountain bike. He asked in a thick Italian accent if we needed assistance.

He laughed and said, “Sì. All roads lead to Cortina, and only then to Rome!” And off he went.

Why did everyone seem so happy cavorting in the mountains? Some psychologists have been lately pondering this very question. One study from 2018 found that a third of mountain bikers in the U.K. used the sport as a coping strategy to improve mood and self-esteem and to feel more connected to nature and the world around them. The authors went so far as to propose riding as a mental-health intervention. Exercising in nature, found another study, was linked to reduced anxiety.

A growing body of evidence suggests that adventure sports and adventure tourism can help alleviate anxiety and fear during life transitions, perhaps especially in women and girls, for whom a bravery gap has long existed. I knew I needed to feel more courageous about facing an uncertain future. Sports that embrace just the right amount of risk—enough to be exciting but not to be inherently dangerous—can help us do just that.

“Adventure creates metaphor and meaning,” as Aleya Littleton, a therapist and founder of Wild and Wonderful Life Counseling, explained to me later. It places you in the present moment, learning to trust your footing. Susan Houge Mackenzie, a psychology professor at the University of Otago in Australia, studies how adventure therapy—yes, there is such a thing—builds three core essential skills of well-being: autonomy, competence, and relatedness (both to the natural and human world, a pillar of emotional health). It also, as I found the next day, works miracles to reduce negative thoughts and promote joy.

After our Alex Honnold\–channeling climb, Betsy’s husband took the kids to enjoy the longest zip line in Europe while Betsy marched me off to pick up another set of rental bikes. I peered longingly at the e-bikes, but she had selected some full-suspension carbon-fiber feats of engineering. We strapped down our gloves and pedaled across the valley to a ski area. Instead of doing the sensible thing and skiing downhill, we’d be riding up, through summertime mud and rock. But since this was Italy, there would be rewards: a small chapel at the top filled with men singing a chorale and then, after two hours of riding, a farmstead restaurant where a waitress in lederhosen served us Tyrolean pancakes under a lake of lingonberry jam.

But it was riding back—nearly all downhill, dodging rocks and tree roots—that flipped some kind of switch. I was grinning, whooping, expressing sounds my body hadn’t made in months or maybe even years. Now I was remembering—on a cellular level—who I used to be even before my marriage began: someone who loved the thrill of speed, of moving through space and feeling the wind on my skin. She was starting to come back.