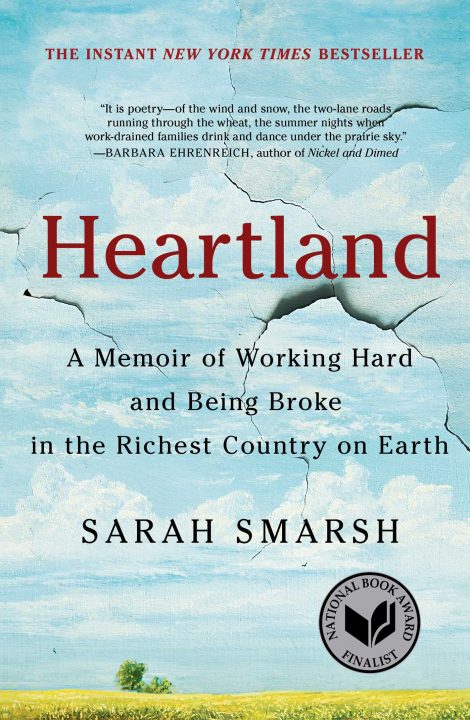 An essential read for our times: an eye-opening memoir of working-class poverty in America that will deepen our understanding of the ways in which class shapes our country.

Sarah Smarsh was born a fifth generation Kansas wheat farmer on her paternal side, and the product of generations of teen mothers on her maternal side. Through her experiences growing up on a farm thirty miles west of Wichita, we are given a unique and essential look into the lives of poor and working class Americans living in the heartland.

During Sarah’s turbulent childhood in Kansas in the 1980s and 1990s,

An essential read for our times: an eye-opening memoir of working-class poverty in America that will deepen our understanding of the ways in which class shapes our country.

Sarah Smarsh was born a fifth generation Kansas wheat farmer on her paternal side, and the product of generations of teen mothers on her maternal side. Through her experiences growing up on a farm thirty miles west of Wichita, we are given a unique and essential look into the lives of poor and working class Americans living in the heartland.

During Sarah’s turbulent childhood in Kansas in the 1980s and 1990s, she enjoyed the freedom of a country childhood, but observed the painful challenges of the poverty around her; untreated medical conditions for lack of insurance or consistent care, unsafe job conditions, abusive relationships, and limited resources and information that would provide for the upward mobility that is the American Dream. By telling the story of her life and the lives of the people she loves with clarity and precision but without judgement, Smarsh challenges us to look more closely at the class divide in our country.

A beautifully written memoir that combines personal narrative with powerful analysis and cultural commentary, Heartland examines the myths about people thought to be less because they earn less. 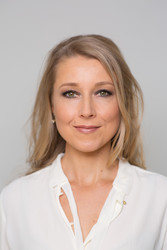 Sarah Smarsh has covered socioeconomic class, politics, and public policy for the Guardian, the New York Times, the Texas Observer, Pacific Standard, the Economic Hardship Reporting Project, and many other publications. A recent Joan Shorenstein Fellow at Harvard University’s Kennedy School of Government and a former professor of nonfiction writing, Smarsh is a frequent speaker on economic inequality and related media narratives. She lives in Kansas. Heartland is her first book.

“A deeply humane memoir that crackles with clarifying insight, Heartlandis one of a growing number of important works – including Matthew Desmond’s Evicted and Amy Goldstein’s Janesville – that together merit their own section in nonfiction aisles across the country: America’s postindustrial decline. . . . With deft primers on the Homestead Act, the farming crisis of the ‘80s, and Reaganomics, Smarsh shows how the false promise of the ‘American dream’ was used to subjugate the poor. It’s a powerful mantra.” —New York Times Book Review

“Heartland is [Smarsh’s] map of home, drawn with loving hands and tender words. This is the nation’s class divide brought into sharp relief through personal history … Heartland is a thoughtful, big-hearted tale … Heartland is a welcome interruption in the national silence that hangs over the lives of the poor and a repudiation of the culture of shame that swamps people who deserve better.” —Washington Post

“Something about Sarah Smarsh’s writing makes you light up inside. You feel her joy and grief, fury and hope … That is how I felt reading Smarsh’s book: as if the world could wait until I got to the end. Smarsh’s book belongs with Ta-Nehisi Coates’ Between the World and Me and J.D. Vance’s Hillbilly Elegy as a volume with a transformative vision—a message for a blind and uncaring America, which needs to wake up. Hopefully we will not just open our eyes. Hopefully we will also change.” —The American Conservative

“Smart, nuanced and atmospheric … Heartland deepens our understanding of the crushing ways in which class shapes possibility in this country. It’s an unsentimental tribute to the working-class people Smarsh knows — the farmers, office clerks, trash collectors, waitresses — whose labor is often invisible or disdained.” —NPR Books

“In her sharply-observed, big-hearted memoir, Heartland, Smarsh chronicles the human toll of inequality, her own childhood a case study … what this book offers is a tour through the messy and changed reality of the American dream, and a love letter to the unruly but still beautiful place she called home.” —Boston Globe

“Sarah Smarsh’s intelligent, affecting memoir … [asks]: What’s the matter with the American dream? … Understanding widening wealth inequality in our nation is a project with which anyone who has a conscience should be concerned — a robust, expansive middle class is vital to democracy, and arguably to the functioning of our particular Constitution. Smarsh’s Heartland is a book we need: an observant, affectionate portrait of working-class America that possesses the power to resonate with readers of all classes.” —San Francisco Chronicle

“In a memoir written with loving candor, the daughter of generations of serially impoverished Kansas wheat farmers and working-poor single mothers chronicles a family’s unshakeable belief in the American dream and explains why it couldn’t help but fail them.” —Ms. Magazine

“Heartland recounts five generations of Smarsh exploits in the farmlands of Kansas, from pioneer days to the Obama era, when the author finally breaks into the middle class. The book is a personal, decades-long story of America’s coordinated assault on its underclass … There is rich soil in America’s flyover states, and if we follow Smarsh’s path, we will find families like mine and the author’s, full of sensible, resilient women who may be disenfranchised, but who are also uniquely poised and equipped to aid in the revolution, and in our collective liberation.”
—L.A. Times

1. At the beginning of the memoir, Smarsh writes that, as a child, “I heard a voice unlike the ones in my house or on the news that told me my place in the world.” What did this other voice tell her? What did the people in her house and on the news say about her?

2. Smarsh is the product of generations of teen pregnancy on her mother’s side. She writes that she was like a penny in a purse, “not worth much, according to the economy, but kept in production.” How did this legacy of teenage pregnancy affect her family’s social and economic mobility?

3. Smarsh and her brother were each born just weeks before Reagan won an election, and his economic policies had a tremendous impact on her childhood. Can you describe what that impact looked like?

4. Smarsh describes an incident in which she, as a toddler, pulled a chest of drawers onto herself, forcing her barely postpartum mother to injure herself lifting it up. Smarsh’s father was at work. How does this accident demonstrate the dangers of rural poverty and the fault lines in Jeannie and Nick’s relationship? Are the two related?

5. There were many, many car wrecks in the author’s life and in the lives of members of her family. Why do you think that is?

6. Teresa, Smarsh’s paternal grandmother, had untreated “woman problems” in her youth, according to Nick. What kinds of problems might he have been referring to? How was life in rural Kansas different for women than it was for their farmer husbands?

7. Smarsh writes, “When I was well into adulthood, the United States developed the notion that a dividing line of class and geography separated two essentially different kinds of people.” Do you think that’s true? How does Smarsh straddle that line?

8. Betty often said that homeless people should “get a job,” even though she and her family struggled economically—and even though she often gave money to those same people. How do you think her values were affected by the class system?

9. Do you believe, as Smarsh writes, that “in America . . . the house is the ultimate status symbol, and ownership is a source of economic pride”? What do you think the family’s transience meant to Nick, Jeannie, Smarsh, and her brother?

10. How did Bob’s newspaper job and middle-class stability affect the family’s economic situation?

11. Many of the women in Smarsh’s family endured physical violence at the hands of their boyfriends, husbands, and fathers. In what ways does gendered violence inhibit economic stability?

12. Smarsh writes that the women in her family had an “old wisdom” that had more to do with intuition than knowledge or education. Where do you see this in action in the lives of female characters?

13. Consider the specific reality of Smarsh’s life as a high-achieving high school student. What pushed her to excel?

14. What social realities did Smarsh meet in college? How was her life different from those of her fellow students, and how was it similar?

15. Smarsh argues that “this country has failed its children.” Do you agree? How does her story demonstrate that, or fail to?

1. Consider your own economic background. How did economic opportunities, or the lack of them, shape your experience as a child? Discuss these experiences with the group.

2. Listen to a short interview with Sarah Smarsh about national identity on WNYC: https://wnycstudios.org/story/out-of-many-there-one-american-identity.