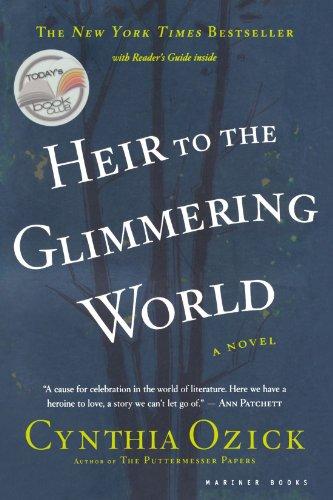 HEIR TO THE GLITTERING WORLD

Set in the New York of the 1930s, Heir to the Glimmering World is a spellbinding, richly plotted novel brimming with intriguing characters. Orphaned at eighteen, with few possessions, Rose Meadows finds steady employment with the Mitwisser clan. Recently arrived from Berlin, the Mitwissers rely on the auspices of a generous benefactor, James A’Bair, the discontented heir to a fortune his father, a famous childen’s author, made from a series of books called The Bear Boy. Against the vivid backdrop of a world in tumult, Rose learns the refugee family’s secrets as she watches their fortunes rise and fall in Ozick’s wholly engrossing novel.

Set in the New York of the 1930s, Heir to the Glimmering World is a spellbinding, richly plotted novel brimming with intriguing characters. Orphaned at eighteen, with few possessions, Rose Meadows finds steady employment with the Mitwisser clan. Recently arrived from Berlin, the Mitwissers rely on the auspices of a generous benefactor, James A’Bair, the discontented heir to a fortune his father, a famous childen’s author, made from a series of books called The Bear Boy. Against the vivid backdrop of a world in tumult, Rose learns the refugee family’s secrets as she watches their fortunes rise and fall in Ozick’s wholly engrossing novel.

Cynthia Ozick is one of America’s most prominent women of letters, acclaimed for her many works of fiction and criticism. Ozick was a finalist for the National Book Award for her previous novel, The Puttermesser Papers, which was named one of the top ten books of the year by the New York Times Book Review, Publishers Weekly, and the Los Angeles Times Book Review. She received the National Book Critics Circle Award for her essay collection Quarrel & Quandary. Ozick’s work has been translated into thirteen languages worldwide. Her classic novella The Shawl was produced for the stage in New York, directed by Sidney Lumet.

“A cause for celebration in the world of literature. Here we have a heroine to love, a story we can’t let go of, gorgeous sentences, and ideas to wrestle with. I didn’t just read this book, I devoured it.”
—Ann Patchett, author of Bel Canto

With the brisk pace of its plot, its plucky teenaged heroine, and its tidy, satisfying conclusion, Heir to the Glimmering World may be read as an update of the nineteenth-century novel. How does Ozick allow this old-fashioned literary style to resonate in a twentieth-century story? What ironies are present in Ozick’s novel that would be absent from a Victorian novel? Heir to the Glimmering World ends in 1937; how does your knowledge of the world events of the next decade affect your perception of the ending?

How do Rosie’s actions differ from the actions of, for instance, a character from her beloved Jane Austen or Charles Dickens, and how might she behave differently if the story were to take place today?

Herr Mitwisser cites an Arab proverb: “The wise man speaks of ideas, the middling man of actions, the fool of persons.” In her novel, Ozick “speaks” of all three. How does she makeHeir to the Glimmering World work on different levels — as pure entertainment driven by plot and character and also as a novel of ideas? What elements of the novel did you find most engaging?

While the novel hinges on some tragic turns of event, it is also bracingly funny. How would you describe the overall tone of the book?

The title Heir to the Glimmering World invokes the primary theme of inheritance. How is each character shaped by the legacy of the past he or she has inherited? How do their respective fortunes or misfortunes affect Rose, James, and the Mitwisser children? Who, in your opinion, is the ultimate, truest heir to the glimmering world?

When Rose begins to work for the Mitwissers, she seems bewildered at being employed by such sophisticated intellectuals: a religious scholar and an experimental physicist. In the course of her employment with the Mitwissers, she comes to view them as the complex and imperfect people that they are. Why and how does her attitude toward them change? What events or observations deepen her understanding of them?

As a result of the changes in Hitler’s Germany, Elsa Mitwisser has lost her appointment at the Kaiser Wilhelm Institute, her career, her home, and possibly her sanity. In response, she effectively removes herself from the world, yet she remains acutely aware of the activities of her family. Is her lunacy an act? What would she gain or lose from such an act?

Ozick writes of James A’Bair’s childhood, “He was not a normal boy . . . he was his father’s drawing, his father’s discourse, his father’s exegesis of a boy . . . his father had interpreted him for the world.” James has unhappily tried his whole life to cast off an identity created by his father. Similarly, Rose is running away from her past and Ninel tries to invent a new identity for herself. Are Ozick’s characters ultimately successful in their pursuits? How are we burdened by others’ perceptions of us? How do we all in some ways invent our own identities?

On the surface, James A’Bair appears to sweep whimsically through life; he drifts effortlessly into the lives of the Mitwissers, for instance. Yet he is a character with a deeply troubled soul. How does Ozick reveal the two sides of James A’Bair? Do his troubles undermine his likability? Do you find yourself sympathizing with him? Why does Elsa offer only vehement disapproval of him? Do you think his fate is inevitable? Why or why not?

One key theme of the book is the power of interpretation: the validity of it, the necessity of it, and also the inaccuracy of it. How do both Rudi’s and James’s lives revolve around the idea of interpretation? Do you believe the Karaites’ rejection of all interpretation is defensible? How does this theme resonate in other ways in the novel?

Professor Rudolf Mitwisser’s professional studies center on religion, yet he does not seem a particularly faithful man. Religion hardly factors into his family life. Do you find this odd? What does this say about Herr Mitwisser?

In his theater days, James offers money to bribe an indifferent child to learn to read. What does this action say about his complicated attitudes toward books and literature, toward his fortune, and toward children?

Ozick prefaces Heir to the Glimmering World with an epigraph from Wallace Stevens: “The absence of imagination had/Itself to be imagined.” How does this thought relate to the novel?

Many details in the novel offer significant comment on the worth and power of books, from Rosie’s fondness for nineteenth-century novels like Emma, Middlemarch, Jane Eyre, and Hard Times, to Elsa’s reaction to Jane Austen, to Rudi’s joy at receiving a rare text, for example. What importance does literature have in the novel and in the world at large?