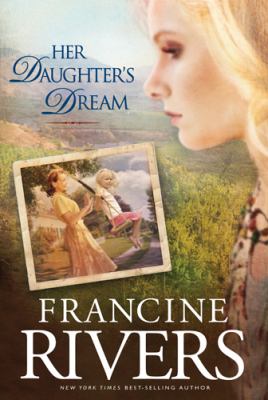 In the dramatic conclusion to the New York Times best seller Her Mother’s Hope, Francine Rivers delivers a rich and deeply moving story about the silent sorrows that can tear a family apart and the grace and forgiveness that can heal even the deepest wounds.

Growing up isn’t easy for little Carolyn Arundel. With her mother, Hildemara, quarantined to her room with tuberculosis, Carolyn forms a special bond with her oma Marta, who moves in to care for the household. But as tensions between Hildie and Marta escalate, Carolyn believes she is to blame.

In the dramatic conclusion to the New York Times best seller Her Mother’s Hope, Francine Rivers delivers a rich and deeply moving story about the silent sorrows that can tear a family apart and the grace and forgiveness that can heal even the deepest wounds.

Growing up isn’t easy for little Carolyn Arundel. With her mother, Hildemara, quarantined to her room with tuberculosis, Carolyn forms a special bond with her oma Marta, who moves in to care for the household. But as tensions between Hildie and Marta escalate, Carolyn believes she is to blame. When Hildie returns to work and Marta leaves, Carolyn and her brother grow up as latchkey kids in a world gripped by the fear of the Cold War.

College offers Carolyn the chance to find herself, but a family tragedy shatters her newfound independence. Rather than return home, she cuts all ties and disappears into the heady counterculture of San Francisco. When she reemerges two years later, more lost than ever, she reluctantly turns to her family to help rebuild a life for her and her own daughter, May Flower Dawn.

Just like Carolyn, May Flower Dawn develops a closer bond with her grandmother, Hildie, than with her mother, causing yet another rift between generations. But as Dawn struggles to avoid the mistakes of those who went before her, she vows that somehow she will be a bridge between the women in her family rather than the wall that separates them forever.

Spanning from the 1950s to present day, Her Daughter’s Dream is the emotional final chapter of an unforgettable family saga about the sacrifices every mother makes for her daughter—and the very nature of unconditional love.

New York Times best-selling author Francine Rivers began her literary career at the University of Nevada, Reno, where she graduated with a bachelor of arts degree in English and journalism. From 1976 to 1985, she had a successful writing career in the general market, and her books were highly acclaimed by readers and reviewers.

“Librarians new to the genre should become familiar with this popular and best-selling CF author. Her latest will appeal to those readers who like “clean” fiction with a romantic tone and well-developed characters, as well as those who enjoy family sagas.” —Library Journal

“Rivers has written another page-turner…this heartfelt and sweeping saga is as ambitious as its central matriarch and will sell well.”— Publishers Weekly

Both Hildie and Trip miss some obvious signs that something traumatic has happened to Carolyn. What are they? Later, in chapter 4, when Hildie and Trip argue about Hildie’s going back to work, Trip says, “A little girl shouldn’t be alone so much. Things could happen.” Discuss the irony in that statement. What is it about their family dynamics that makes Carolyn vulnerable to a predator like Dock?

Do you think Hildie’s character changes from book 1 to book 2? If so, how does she change and why? Did you like her more or less in this book?

Carolyn runs away—literally and figuratively—after getting the news of her brother’s tragic death. Is that a realistic response? Why or why not? Have you ever wished you could run away from a painful reality? How did you deal with it? Have you ever been in the place of Carolyn’s parents and grandmother—not knowing the whereabouts of someone you love? What was that like? What advice would you give someone who is facing such a situation?

When Carolyn meets Mary in Golden Gate Park, Mary says she felt an impulse to make extra sandwiches that morning, even though she had no idea why. Have you ever felt God nudging you to do something you didn’t understand? Did you follow through on that impulse? Why or why not?

After Carolyn comes home following her two-year disappearance, neither Hildie nor Trip presses her for details about what happened. Do you think that is wise? How does this both help and hurt Carolyn? In your own life, how can you balance being nosy with being concerned for those you love?

When Carolyn graduates from college and pays off her debt to her parents, Trip and Hildie give the money back to her. Were you surprised by Trip and Hildie’s action? Why or why not? Why is it hard for Carolyn to accept their gift? Have you ever given or received an unexpected, extravagant gift? What was the motivation behind it? What was the response?

For many years, Carolyn finds more appealing fellowship and support in AA than she does in the church. Why is that? What does that say about AA? about the church? What finally changes Carolyn’s view of Christians? Do you know anyone who has a negative view of the church? What could you say or do to encourage that person to give the church another chance? What other influences does God bring into Carolyn’s life to show her the truth of His love for her?

Near the end of the story, Hildie reflects that God sent Mitch to rescue her, just as he had rescued Carolyn years earlier. In what ways does Mitch “rescue” Carolyn? How might her life have been different if she had never married? if she had married someone less understanding and supportive?

Marta’s choice not to move to Jenner by the Sea with Hildie and Trip seems to finally make the gap between mother and daughter so wide it can’t be crossed. Why does Hildie think Marta doesn’t want to move in with them? What does Marta really want? Why are they unable to discuss it rationally?

In chapter 30, when Dawn and Carolyn go to visit Marta for a week, Marta says that “making things easier on your children is sometimes the worst thing you can do.” Do you agree or disagree? How do you see this illustrated in the story? in your own life?

How does Marta change over the course of the two books? What changes her the most? In what ways is she still the same?

When Dawn confesses to her mother that she slept with Jason, Carolyn’s response is gracious and nonjudgmental. How do Carolyn’s own experiences play into her response to Dawn? How would you respond to such a confession from your son or daughter? How would you like to respond?

How does Dawn’s experience of the church after she sleeps with Jason differ from Carolyn’s experience after returning from Haight-Ashbury? Why is it different? How does Paster Daniel’s gracious response affect Dawn’s future and her walk with Christ? Have you ever been in a position to counsel someone who has made a mistake they think cannot be forgiven? What did (or would) you say?

Near the end of the story, Dawn makes an important decision that affects the life of her unborn child. How might her struggle with miscarriage and infertility have affected her decision? What would you have done in Dawn’s place? Discuss her choice not to talk about it with either her husband or her family. Was that the right way to handle it? Why or why not? How do you think Jason felt when he learned what had happened?

In chapter 55, Dawn reads this excerpt from Marta’s journal: “We try to do a little better than the previous generation and find out in the end we’ve made the same mistakes without intending.” How do you see this illustrated in the story? How have you seen negative behaviors easily turn into a habit in your own life, as Hildie mentions in chapter 56?

When the three generations (Hildemara, Carolyn, and May Flower Dawn) finally sit down to talk, they discuss many of their “family secrets.” Discuss the revelations and the effect of finally getting them out into the open. Are you satisfied with what they talk about and how it goes? In what way do you wish it had been handled differently? Are the responses realistic and/or what you expected?

At one point, Marta tells Dawn that people either weigh you down or give you wings. How do some of the characters in this saga give people wings? What can you do in your own relationships to give those you love wings instead of weighing them down?

While Scripture makes it clear that children are not held responsible for their parents’ sins (see Ezekiel 18:20), it’s also true that destructive patterns tend to continue in families and have a negative impact on successive generations (see Exodus 20:5). Over the span of these two novels, what relationship patterns are repeated between mothers and daughters? between grandmothers and granddaughters? In what ways are the patterns finally broken? Is the resolution realistic? What relationship patterns—either negative or positive—have occurred in your family? If the patterns are negative, what have you done or what could you do to break them?

Are there secrets in your family—either from generations past or from the present? To whom would you like to talk about these secrets? What kind of response do you think you would get? What response would you hope for?

This novel contains many relationships, conversations, rifts, and moments of reconciliation. Take a few minutes to list some of your favorite scenes and tell why you were especially touched or challenged by them.