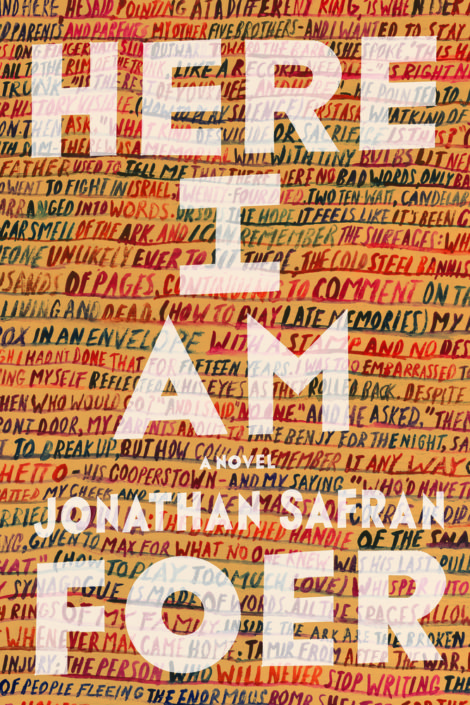 How do we fulfill our conflicting duties as father, husband, and son; wife and mother; child and adult? Jew and American? How can we claim our own identities when our lives are linked so closely to others’?

How do we fulfill our conflicting duties as father, husband, and son; wife and mother; child and adult? Jew and American? How can we claim our own identities when our lives are linked so closely to others’? These are the questions at the heart of Jonathan Safran Foer’s first novel in eleven years—a work of extraordinary scope and heartbreaking intimacy.

Unfolding over four tumultuous weeks in present-day Washington, D.C., Here I Am is the story of a fracturing family in a moment of crisis. As Jacob and Julia Bloch and their three sons are forced to confront the distances between the lives they think they want and the lives they are living, a catastrophic earthquake sets in motion a quickly escalating conflict in the Middle East. At stake is the meaning of home—and the fundamental question of how much aliveness one can bear.

Showcasing the same high-energy inventiveness, hilarious irreverence, and emotional urgency that readers loved in his earlier work, Here I Am is Foer’s most searching, hard-hitting, and grandly entertaining novel yet. It not only confirms Foer’s stature as a dazzling literary talent but reveals a novelist who has fully come into his own as one of our most important writers.

Jonathan Safran Foer is the author of two bestselling, award-winning novels, Everything Is Illuminated and Extremely Loud and Incredibly Close, and a bestselling work of nonfiction, Eating Animals. He lives in Brooklyn, New York.

“[Here I Am] is at once painfully honest and genuinely hilarious—and full of emotional surprises that will leave you reeling.” —Elle

“Here I Am, an epic of family and identity . . . offers an unflinching, tender appraisal of cultural displacement in an uncertain age.” —Rebecca Swirsky, The Economist

“Foer’s . . . polyphonic, and boldly comedic tale of one family’s quandaries astutely and forthrightly confronts humankind’s capacity for the ludicrous and the profound, cruelty and love.” —Booklist (starred, boxed review)

“[Here I Am] showcases Foer’s emotional dexterity even as it takes place across a wider canvas than his previous books . . . This is great stuff, written with the insight of someone who has navigated the crucible of family, who understands how small slights lead to crises, the irreconcilability of love . . . Sharply observed.” —Kirkus Reviews

1. From Isaac and Irving to Jacob and Sam to Tamir and Barak, the male characters of Here I Am complicate simple notions of Jewish masculinity. How do the expectations of manhood differ across generations and nationalities? What do the Bloch and Blumenberg men all have in common?

2. Jacob and Julia are not traditionally religious, but early in their relationship they practiced a “religion for two”—their own Friday Shabbat, Wednesday strolls, and Rosh Hashanah rituals, among others. What do rituals mean for the characters of Here I Am? How important are rituals—in religion, in relationships, and in everyday life—for you?

3. Irv tells his son, Jacob, “Without context, we’d all be monsters” (page 24). What are the contexts that the characters refer to in order to explain their behavior? Are they being honest when they do this? Does the context for behavior make a person more or less responsible for his or her actions?

4. What did you think of Julia’s reaction upon discovering Jacob’s secret cell phone? How would you have reacted?

5. Technology is central to the lives of the characters of Here I Am: texting, virtual worlds, tablets, the Internet, television, Skype, podcasts, blogs, and so on. What are the different roles that technology plays in the lives of these characters? How does technology affect your own life and the ways you communicate?

6. What do Sam and Billie learn about love and conflict at Model UN? How does the students’ imaginary leadership differ from the responses of world leaders when an actual crisis erupts in the Middle East?

7. In the chapter “Maybe It Was the Distance” (beginning on page 219), we learn that Isaac and Benny (Tamir’s grandfather) were the only siblings out of a family of seven brothers who survived the Shoah. After a few years together in a displaced persons camp, Isaac settles in America, and Benny in Israel. Foer writes, “Isaac never understood Benny. Benny understood Issac, but never forgave him.” Did Isaac evade his responsibilities to the Jewish homeland by moving to Washing- ton, D.C.? What did you think of Jacob’s decision not to go to Israel? Was he being cowardly or courageous? How do the other characters, like Tamir and Irv, define courage?

8. “Before [Jacob and Julia] had kids, if asked to conjure images of parenthood they would have said things like ‘Reading in bed,’ and ‘Giving a bath,’ and ‘Running while holding the seat of a bicycle.’ Parenthood contains such moments of warmth and intimacy, but isn’t them. It’s cleaning up. The great bulk of family life involves no exchange of love, and no meaning, only fulfillment. Not the fulfillment of feeling fulfilled, but of fulfilling that which now falls to you” (page 466). If you are a parent, do you agree? Did this vision of family life ring true to you?

9. At Isaac’s funeral, the rabbi says: “And so it is with prayer, with true prayer, which is never a request, and never praise, but the expression of something of extreme significance that would otherwise have no way to be expressed. As Abraham Joshua Heschel wrote, ‘Prayer may not save us. But prayer may make us worthy of being saved.’ We are made worthy, made righteous, by expression” (page 350). What is the role of prayer for the characters in the novel? What does prayer mean in your own life?

11. The novel takes its title from passages in Genesis in which God calls out, “Abraham!” before ordering him to sacrifice his son, Isaac. Abraham dutifully responds, “Here I am.” When do the novel’s characters let each other know “Here I am,” bound by duty? How does this kind of duty both make us free and constrain us?

12. How does Jacob and Julia’s divorce affect their three sons? Does it bring them together? What did you think of the “family conversation” between the brothers that begins on page 437?

13. After viewing a documentary on concentration camps, Sam is wracked with the notion that “his life was, if not the result of, then at least inextricably bound to, the profound suffering, and that there was some kind of existential equation, whatever it was and whatever its implications, between his life and their deaths. Or no knowledge, but a feeling . . . The feeling of being Jewish, but what was that feeling?” (pages 338–39). How does the legacy of the Holocaust affect the Blochs? How do they define their Jewish identity?

14. How did you react to Jacob’s terrifying, exhilarating experience in the lion’s den (page 390)? What was Tamir’s motivation in insisting that Jacob make the leap? How does that moment serve as a metaphor for their adult lives?

15. Discuss the “How to Play” instructions that make up part VII, “The Bible.” What autobiographical details do they reveal about Jacob? Has everyone in his family spent their lives performing an invented role? How do the different characters use humor to express their feelings?

17. “More than a thousand ‘constructed languages’ have been invented—by linguists, novelists, hobbyists—each with the dream of correcting the imprecision, inefficiency, and irregularity of natural language. Some constructed languages are based on the musical scale and sung. Some are color-based and silent. The most admired constructed languages were designed to reveal what communication could be, and none of them is in use” (pages 427–28). The characters of Here I Am struggle to express outside what they feel inside, to overcome the inadequacy of language and say what they really mean. What conflicts in the book are rooted in failures of communication? Do you struggle, like Julia, Jacob, Sam, Isaac, and the others, to express yourself, to speak hard truths?

18. Do you think the book stakes out a position on Israel and its relationship with the United States and the Arab world?

19. What makes Argus’s story a fitting conclusion to the novel? What has Argus taught Jacob about finding fulfillment in life?