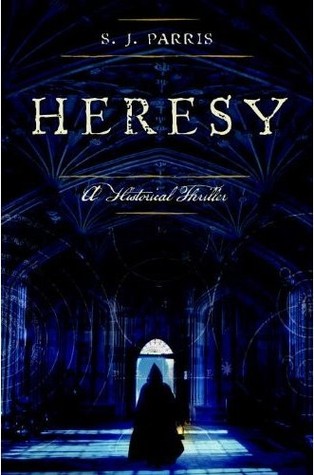 Giordano Bruno was a monk, poet, scientist, and magician on the run from the Roman Inquisition on charges of heresy for his belief that the Earth orbits the sun and that the universe is infinite. This alone could have got him burned at the stake, but he was also a student of occult philosophies and magic.

In S. J. Parris’s gripping novel, Bruno’s pursuit of this rare knowledge brings him to London, where he is unexpectedly recruited by Queen Elizabeth I and is sent undercover to Oxford University on the pretext of a royal visitation. Officially Bruno is to take part in a debate on the Copernican theory of the universe;

Giordano Bruno was a monk, poet, scientist, and magician on the run from the Roman Inquisition on charges of heresy for his belief that the Earth orbits the sun and that the universe is infinite. This alone could have got him burned at the stake, but he was also a student of occult philosophies and magic.

In S. J. Parris’s gripping novel, Bruno’s pursuit of this rare knowledge brings him to London, where he is unexpectedly recruited by Queen Elizabeth I and is sent undercover to Oxford University on the pretext of a royal visitation. Officially Bruno is to take part in a debate on the Copernican theory of the universe; unofficially, he is to find out whatever he can about a Catholic plot to overthrow the queen.

His mission is dramatically thrown off course by a series of grisly murders and a spirited and beautiful young woman. As Bruno begins to discover a pattern in these killings, he realizes that no one at Oxford is who he seems to be. Bruno must attempt to outwit a killer who appears obsessed with the boundary between truth and heresy.

Like The Dante Club and The Alienist, this clever, sophisticated, exceptionally enjoyable novel is written with the unstoppable narrative propulsion and stylistic flair of the very best historical thrillers.

S. J. Parris is a contributing journalist for various newspapers and magazines including the Observer, the Guardian, and the New Statesman.

“HERESY is a must-read for every fan of historical thrillers. S. J. Parris transports the reader back to an extraordinary time in history by mobilizing fascinating details, suspense, and fully-drawn characters. Giordano Bruno turns out to be that rare hero, charismatic and nuanced enough to impel an encore, and to leave us asking for more from the gifted Parris.”—Matthew Pearl, New York Times bestselling author of The Dante Club and The Poe Shadow

“HERESY has everything— intrigue, mystery, excellent history and haunting sense of place. The beginning of a wonderful new detective series.”—Kate Mosse, New York Times bestselling author of Labyrinth and Sepulchre

“The famous scientist, Giordano Bruno, erupts with volcanic force from the pages of S.J. Parris’ spellbinding debut novel, Heresy. Blending the philosophical sleuthing skills of Brother Cadfael with the magic sorcery of Voldemort, Bruno cracks the secret code, unraveling a Church conspiracy as deep and dark as that in a Dan Brown novel.”—Katherine Neville, New York Times bestselling author of The Eight and The Fire

“The murders stack up, the pace becomes helter-skelter and the action overloaded as Bruno, in pursuit of a corrupt Jesuit priest, confronts endless perils before justice is finally and bloodily served. Spirited storytelling, an appealing sleuth and a cool, mutilated villain will lead readers to hope this is the launch of a series.”—Kirkus

When Giordano Bruno is recruited as a spy by Sir Francis Walsingham, he hesitates. Walsingham tells him “whenever you feel the wrench between conscience and duty, your care should always be for the greater good.” Yet Bruno’s conscience remains troubled throughout by the double life he has to lead. Does this make him a more appealing narrator? To what extent is a spy morally compromised by the fact that he must maintain a deception? Is Walsingham right—is the greater good always more important than individuals?

Europe in the 1580s is divided by religious wars between Catholics and Protestants. Religious loyalty is often stronger than national or family ties. Walsingham tells Bruno that “faith and politics are now one and the same.” What parallels do you see with our own times? What inspires people to become martyrs?

Bruno is seeking a lost book that he believes will reveal the secret of man’s divinity. He believes that with this knowledge he can formulate a philosophy that will overcome religious divisions. Why was this such a radical idea at the time? Four hundred years later, how do we regard Bruno’s optimistic dream of the end of conventional religion, with its conflicts and dogma? Does history show that some people will always turn religion to violent ends?

Both Walsingham and Jenkes the book dealer say they find Bruno intriguing because he contains so many contradictions and can’t be easily labeled. Did you find him intriguing/enigmatic as a character? What more would you have liked to find out about him?

Sophia Underhill is surprised to hear Bruno say he would appreciate a woman who could form her own opinion and express it. Why is Sophia unusual for a young woman of her time and class? Do you think her attraction to Bruno was genuine? Did your feelings about her change when her secret was revealed?

After the first murder, Bruno is sent an anonymous letter that appears to offer a clue about the killing. Who did you first think might have sent it? What was the purpose of the letter? Why did the sender want Bruno involved?

Many of the book’s central characters are real historical figures. Why do you think the author chose to use real characters? Does it affect the way you read the novel to know that some of the events really happened? Would it make you want to read more about that period or the people involved?

Queen Elizabeth I famously said she had “no desire to make windows into men’s souls”. At the end of the book, Bruno is confronted by a character who says that tolerance in matters of belief is equal to saying there is no truth or untruth, right or wrong. Who is right? Does passionate belief in any cause rule out tolerance of other views? Where do we see this most keenly in our own age?

A great deal of the story revolves around lost or forbidden books. Why were books considered so powerful at the time? What other stories have you read where a lost or secret book was at the heart of a mystery? Why does the idea of a forgotten or banned book have such a hold on the imagination?

Were you surprised to discover the identity of the killer? Who had you suspected? At the very end, Bruno remains ambivalent about whether justice has been done —do you agree?