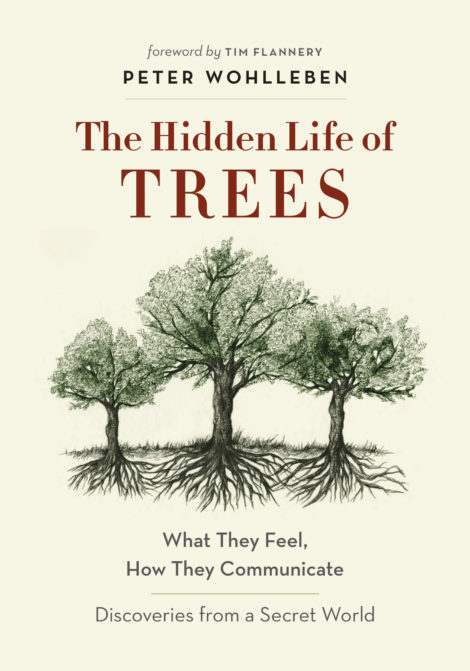 THE HIDDEN LIFE OF TREES

What They Feel, How They Communicate—Discoveries from A Secret World

A forester’s fascinating stories, supported by the latest scientific research, reveal the extraordinary world of forests and illustrate how trees communicate and care for each other.

Are trees social beings? In this international bestseller, forester and author Peter Wohlleben convincingly makes the case that, yes, the forest is a social network. He draws on groundbreaking scientific discoveries to describe how trees are like human families: tree parents live together with their children, communicate with them, support them as they grow, share nutrients with those who are sick or struggling, and even warn each other of impending dangers. Wohlleben also shares his deep love of woods and forests,

A forester’s fascinating stories, supported by the latest scientific research, reveal the extraordinary world of forests and illustrate how trees communicate and care for each other.

Are trees social beings? In this international bestseller, forester and author Peter Wohlleben convincingly makes the case that, yes, the forest is a social network. He draws on groundbreaking scientific discoveries to describe how trees are like human families: tree parents live together with their children, communicate with them, support them as they grow, share nutrients with those who are sick or struggling, and even warn each other of impending dangers. Wohlleben also shares his deep love of woods and forests, explaining the amazing processes of life, death, and regeneration he has observed in his woodland.

After learning about the complex life of trees, a walk in the woods will never be the same again. 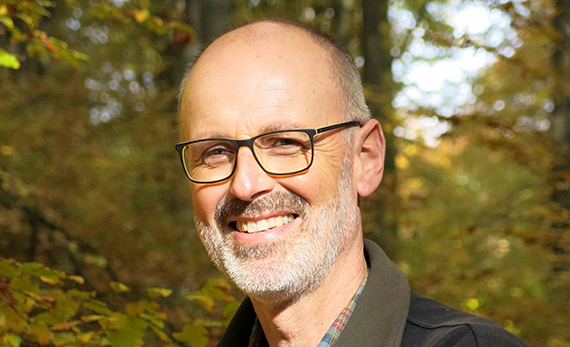 Peter Wohlleben spent over twenty years working for the forestry commission in Germany before leaving to put his ideas of ecology into practice. He now runs an environmentally-friendly woodland in Germany, where he is working for the return of primeval forests. He also runs a Nature Academy, the Waldakademie Hümmel, where he gives leads guided tours and seminars. He is the author of numerous books about nature, including The Hidden Life of Trees and The Inner Life of Animals.

“An engrossing primer on trees, brimming with facts and an unashamed awe for nature.”—Washington Post

“This fascinating book will intrigue readers who love a walk through the woods.”—Publishers Weekly

1. When asked why Wohlleben chose to anthropomorphize trees, he said, “I use words of emotion to connect with people’s experience. Science often takes these words out, but then you have a language people can’t relate to and can’t understand.” In what ways is the anthropomorphism of trees effective in The Hidden Life of Trees?

2. The Hidden Life of Trees became a surprise bestseller, earning a place on the New York Times and many regional bestseller lists. What is it about the present that makes nature a popular topic right now?

3. Fungi, while functioning as the “wood wide web” for trees, can allow them to communicate and share crucial survival information. However, they can also damage trees by invading the bark and causing rot. How does this relationship reflect or parallel the one that humans have with the Internet?

4. Wohlleben mentions how a number of forest conservationist methods that help trees in the short-term actually damage a forest’s health in the long-term. In the forest that he works with in Hümmel, he has banned machines and only allows log removal by horses. Is technological advancement working with nature or against it?

5. When a woodpecker drills holes into a tree’s bark, the tree is then susceptible to rot or an invasion of fungi. On the other hand, birds play an integral role in plant reproduction by spreading seeds over long distances. How would you describe the complex relationship between animals and trees: Good, bad, or neutral? Why?

6. Western society places more of an emphasis on the individual, whereas Eastern society values a more collective culture. In terms of the way in which trees care for themselves and others, where do they fall in this spectrum and why?

7. In the first chapter called “Friendship,” Wohlleben describes himself being profoundly inspired when he observes that what he initially took for stones were actually remnants of a rotting stump that were kept alive by its neighbouring trees. Is there a significant tree or forest area that has affected your life?

8. What is the most important lesson that human society can adopt from the life of trees?

9. What misconceptions did you have about trees before reading this book? How did it feel to have your perspective change?

10. Wohlleben writes that people are more physiologically relaxed when journeying through a deciduous forest due to the chemical signals the trees release. However, this effect is absent in a walk through a coniferous forest.
•     Have you experienced this difference?
•     Which forest do you prefer to walk through and why?

We humans are emotional animals. We feel things—we don’t just know the world intellectually. So I use words of emotion to connect with people’s experience. Science often takes these words out, but then you have a language people can’t relate to and can’t understand. That’s one reason most scientific research has so little impact on people. We have been viewing nature like a machine. That is a pity because trees are badly misunderstood. When I say mother trees suckle their children, no one really thinks that the mother tree will latch its seedling to a non-existent breast. But you say “suckling,” and everyone knows instantly what’s going on—that there’s a special relationship.

What are some key lessons that we as humans can learn from the forest?

The main lesson is that support without conditions is the best thing. When you are caring for other trees—or other humans—then you really care for yourself. It’s good for you because, as a human being, you need your family and social structure to feel well. Trees are the same. When you discover trees and watch them, it’s like looking in a mirror. We see it on our forest reserves when an old beech tree becomes lonely because a storm has blown down four or five of its neighbours and becomes weak. We all know it’s not working when every single person is just thinking of him or herself.

How do we know that trees talk to each other?

Scientists can prove very easily that trees exchange information. For example, when an insect attacks a tree, you can measure electrical signals going through the tree, and the tree will produce poisonous substances to get rid of the insect. In the meantime, it warns its surrounding companions by a chemical call, a scent, and the other trees know instantly what sort of attack is coming and can prepare themselves. We know just a few words of tree speech by observing how trees respond when they are under attack. It’s like learning English by hurting people and then listening to what they are telling you. It’s not a good way to learn tree speech, but it’s the only one we have so far.

You speak about the forests in central Europe as well as those in British Columbia. What differences are there between the trees on these separate continents?

I don’t think there are any big differences because forest are all working on the same base all over the world. Whether you’re in British Columbia, Germany, or Brazil, forests all over the world form family bonds because trees are very social. They live according to the same strategies, which means that they try to care and support each other to make a forest stable. A tree is not a forest—a tree needs a forest. That way they can create a certain climate.

What’s the most surprising thing you discovered while writing The Inner Life of Animals?

Jane Billinghurst, the wonderful translator of the German edition, drew my attention to an article that described crows bringing gifts to a young girl. That was when I noticed for the very first time that “our” crow, the one we feed daily when we go out to the pasture to feed our horses, was also giving us gifts. Small stones, apples, or sometimes even a dead mouse. Up until then I’d never realized why the crow was leaving these objects at the place where we fed it.

What actions suggest that trees have memory?

We had a heavy drought here in Germany. In subsequent years, the trees that had suffered through the drought consumed less water in the spring so that they had more available for the summer months. Trees make decisions. They can decide things. We can also say that a tree can learn, and it can remember a drought its whole life and act on that memory by being more cautious of its water usage.

In about one in 50 cases, we see these special friendships between trees. Trees distinguish between one individual and another. They do not treat all other trees the same. For example, I saw two old beeches standing next to each other. Each one was growing its branches turned away from the other rather than toward each other, as is more usually the case. In this way and others, tree friends take care of each other. This kind of partnership is well known to foresters. They know that if you see such a couple, they are really like a human couple; you have to chop down both if you chop one down because the other will die anyway.

What is it that trees do that suggests they have personalities?

Trees have just as much character as humans do. They also exercise independent judgments, which can differ. If trees lose their leaves too early, they may not produce enough food for a long winter. If they keep them on too long, they may get caught in an early snowstorm and the weight of the snow can break their branches. Some trees of the same species and age living right next to each other shed their leaves weeks before their neighbors. I’m not sure why some choose to do this earlier and others later, but it shows that there really are differences of character that we can’t easily account for.

Do trees feel pain when they are pruned or cut down?

We don’t know how trees experience pain, but the mechanism is the same as in humans. When you hurt a tree, electrical signals run through the tree’s tissue. New research by the University of Leipzig shows that when a human cuts a branch, the tree will bring in wound-healing substances. But when a deer bites on a branch, the tree will first bring in poisonous substances to repel the deer, and afterwards bring in substances to heal the wound. So a tree is able to sense the difference in attacker.

How can spending time in a forest improve human health?

Research in South Korea and Japan shows that your blood pressure will go down when you’re in a healthy forest. There is also research that says if you can look out the window at a tree when you’re in the hospital, you will become healthy again more quickly than if the tree wasn’t there. It makes sense. For example, fire and humans go together, otherwise we wouldn’t have developed as we did. Now for fire, you need to have wood, forests, so this strong relationship with our ancestors is there in our unconscious.