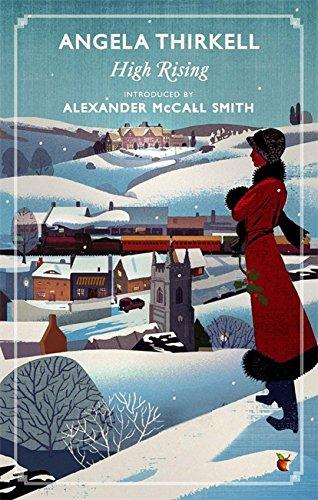 Successful lady novelist Laura Morland and her boisterous young son Tony set off to spend Christmas at her country home in the sleepy surrounds of High Rising. But Laura’s wealthy friend and neighbour George Knox has taken on a scheming secretary whose designs on marriage to her employer threaten the delicate social fabric of the village.

Successful lady novelist Laura Morland and her boisterous young son Tony set off to spend Christmas at her country home in the sleepy surrounds of High Rising. But Laura’s wealthy friend and neighbour George Knox has taken on a scheming secretary whose designs on marriage to her employer threaten the delicate social fabric of the village. Can clever, practical Laura rescue George from Miss Grey’s clutches and, what’s more, help his daughter Miss Sibyl Knox to secure her longed-for engagement?

Angela Thirkell (1890-1961) wrote many works of fiction and non-fiction, including twenty-nine ‘Barsetshire‘ novels, which won her great popularity and acclaim. The first of these, High Rising, was published in 1933. Her relatives included Edward Burne-Jones, Rudyard Kipling and Stanley Baldwin, and her godfather was J. M. Barrie. She was twice married and had four children, two of them writers: Colin MacInnes, who wrote Absolute Beginners, and Graham MacInnes, a distinguished diplomat and a novelist.

“Charming, very funny indeed. Angela Thirkell is perhaps the most Pym-like of any twentieth-century author, after Pym herself.”

“You read her, laughing, and want to do your best to protect her characters from any reality but their own.” —New York Times

“To be so witty and charming yet also so brilliantly brusque and practical as Laura Morland is my new year’s resolution.” —Pippa Wright, author of The Foster Husband

Sarra Manning in the Guardian said: ‘Though [Thirkell is] compared to both Nancy Mitford and Barbara Pym, I find her far less brittle than the former and way less churchy than the latter.’ Do you agree? Are there any authors you can compare Thirkell with? How does she fare? (Think not only of classic writers – eg. Stella Gibbons – but also of contemporary authors.)

Is there a serious point to social comedy?

Are the characters fully developed or do you think they merely act as vehicles for Thirkell’s social commentary?

Do you have any sympathy for ‘the incubus’ Miss Grey?

Alexander McCall Smith points out in his introduction that in 1933, when this book was published, if you were a woman with no relations to take you in, and no money, ‘finding a husband was … a deadly earnest task – almost as important as in the time of Jane Austen’. Discuss, in relation to this novel.

Who do you think Anne Todd should have accepted – George Knox or Dr. Ford? Did her decision surprise you?

Are Adrian and Sybil a good match?

Tony is infuriating and endearing (and boring). Is he a realistic child?

What do you think of Laura’s candid portrayal of motherhood? ‘She had sent him to school earlier than the others . . . partly to break his spirit. She fondly hoped that after a term or two at school he would find his own level, and be clouted over the head by his unappreciative contemporaries. But not at all. He returned from school rather more self-centred, talking even more, and, if possible, even less interestingly than before.’

Do you think Laura Marling shares any similarities with the author herself?

Laura is demonstrably very well read – she is equal to George Knox’s historical and literary allusions – but her escapism lies in books with titles like the Omnibus Book of Blood, Torture and Disease. Is there a place for ‘good bad’ books in your life?