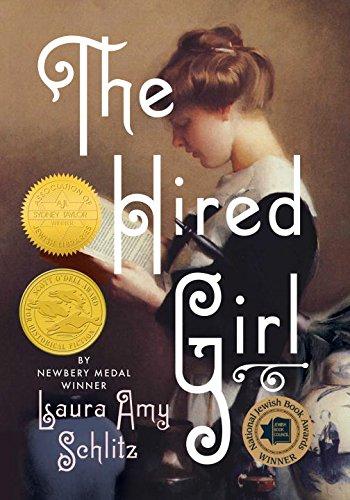 Fourteen-year-old Joan Skraggs yearns for real life and true love—like the heroines in her beloved novels experience. But what hope is there for adventure, beauty, or art on a hardscrabble farm in Pennsylvania where the work never ends? Over the summer of 1911, Joan pours her heart out into her diary as she seeks a new, better life for herself—because maybe, just maybe, a hired girl cleaning and cooking for six dollars a week can become what a farm girl could only dream of—a woman with a future.

Fourteen-year-old Joan Skraggs yearns for real life and true love—like the heroines in her beloved novels experience. But what hope is there for adventure, beauty, or art on a hardscrabble farm in Pennsylvania where the work never ends? Over the summer of 1911, Joan pours her heart out into her diary as she seeks a new, better life for herself—because maybe, just maybe, a hired girl cleaning and cooking for six dollars a week can become what a farm girl could only dream of—a woman with a future. Inspired by her own grandmother’s journal, Newbery Medalist Laura Amy Schlitz relates Joan’s journey from the muck of the chicken coop to the comforts of a society household in Baltimore (Electricity! Carpet sweepers! Sending out the laundry!), taking readers on an exploration of feminism and housework; religion and literature; love and loyalty; cats, hats, and bunions.

Laura Amy Schlitz is the author of the Newbery Medal–winning Good Masters! Sweet Ladies! Voices from a Medieval Village, the Newbery Honor book and New York Times bestseller Splendors & Glooms, and several other books for young readers. A teacher as well as a writer, Laura Amy Schlitz lives in Maryland.

“The beauty of this novel is that it dares to go beyond the school-is-cruel and paranormal-dystopian-romance conventions and lets its adolescent heroine think on the page about what makes a human being whole: art, love, faith, education, family, friendship.” —The New York Times Book Review

“Fans of Little Women, rejoice. Janet’s impassioned diary, inspired by Schlitz’s own grandmother’s journals, explores themes of faith and feminism, love and literature, culture and class in early 20th-century America, all the while charming readers with a vivid cast of characters.”—Shelf Awareness

“A memorable novel from a captivating storyteller.” —Booklist (starred review)

“Coming-of-age drama and deeper questions of faith, belonging, and womanhood are balanced with just the right blend of humor. A wonderful look into the life of a strong girl who learns that she needs the love of others to truly grow up.” —School Library Journal (starred review)

1. “I know I’m not nothing,” Joan writes while she’s still living on the farm (page 36). What is the source of her self-confidence? How did her mother and teacher foster it? Why can’t her father and brothers extinguish it?

2. Why does Mr. Skraggs burn his daughter’s books? What does he fear reading will do to her? Is he right? Why or why not?

3. Why does Joan rename herself when she arrives in Baltimore? What does she gain by choosing her own name?

5. Why is Malka reluctant to share her housekeeping duties with a non-Jew? Why does Father Horst think Joan should work for a Catholic family?

6. Joan had never met a Jew or heard the word “anti-Semitism” before she went to Baltimore. What does living with the Rosenbachs teach her about the city’s Jewish population? What does she discover about anti-Semitism in Baltimore and beyond?

7. Social class separates Joan from the Rosenbachs perhaps even more than religion. How are hired girls supposed to behave? What are the penalties for breaking the rules?

8. Joan prays regularly to the Blessed Mother. “Sometimes she answers me back,” Joan writes (page 6), “though I’m never sure if the voice is hers or Ma’s, or if the whole thing is my imagination.” What do you think?

9. Alone in a chapel at Corpus Christi Church, Joan realizes, “I have to be a Catholic” (page 354). How would you describe what happens to her there?

11. What does Mr. Rosenbach love about America? Why do his daughters-in-law criticize him for being “too Amerikanisch” (page 356)?

13. Running away from home has always been dangerous, especially for a fourteen-year-old girl. At what points in The Hired Girl does Joan narrowly avoid disaster? Is she lucky? Or does she make her own luck?

14. What qualities does Joan share with modern American teenage girls? In what other ways is she thoroughly of her own time?

15. What does Mimi realize immediately about Joan? Why does she think of Joan as a friend, not as a servant? What traits do the two girls share?

16. “You think of yourself as a member of this family,” Mimi says to Joan (page 327) “as if you’re almost Jewish. But you’re not. You’ll never be one of us.” Why is this so hurtful for Joan to hear? Why could she never be David’s wife?

17. “The world’s changing—not for the better, if you ask me—but in these crazy modern times,” Malka says (page 376), “a girl can be anything. A doctor, even.” What do you think Joan’s career will be? Will Mimi end up running Rosenbach’s Department Store?

18. At the very beginning of the book, when Joan receives her new diary, she vows to “write in it with truth and refinement” (page 3). By the end of The Hired Girl, has she kept that promise? Why or why not?

19. The novel takes place in America during the turn of the previous century. Some of the characters are very Old World; others are more attracted to modern, “Amerikanisch” ways. Which characters are wedded to tradition? Which are eager to embrace novelty? Where does Joan stand?

20. Joan begins the novel lamenting the lost opportunity to get an education, and she ends it rejoicing because she’s about to go to school. In between, she falls in love with David Rosenbach. As a reader, were you disappointed that Joan’s first love affair ended in heartbreak (and recovery)? Would you have rather had the book end with her engagement to David? Why or why not?

21. Joan uses the phrase “real life” in two opposite ways. She thinks of it as taking place in the Swiss Alps or Venice, and she imagines it to be highly colorful and exciting; she’s longing for her “real life” to begin. But she also wonders why “real life” (that is, her life) can’t be more like the opera. Like many people, she is living two lives: one full of housework and waiting, and another that is marked by emotional peaks (her visit to the opera, the time she spends with David) and valleys. Which is more real? What is Joan’s real life?