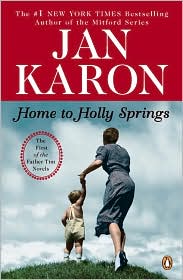 As a retired Episcopal priest, Father Tim Kavanagh is well aware of the power of words. Words of comfort. Words of Scripture. Words of encouragement. But it only takes two simple words to inspire him to make one of the most important journeys of his life, and those words are: “Come home.”

And so he does. Traveling to his boyhood home in northern Mississippi doesn’t merely take Father Tim across hundreds of miles. Thanks to a thousand sights and smells, he also travels back through memories—some fond and some he’s tried for nearly forty years to forget.

As a retired Episcopal priest, Father Tim Kavanagh is well aware of the power of words. Words of comfort. Words of Scripture. Words of encouragement. But it only takes two simple words to inspire him to make one of the most important journeys of his life, and those words are: “Come home.”

And so he does. Traveling to his boyhood home in northern Mississippi doesn’t merely take Father Tim across hundreds of miles. Thanks to a thousand sights and smells, he also travels back through memories—some fond and some he’s tried for nearly forty years to forget. He recalls his stern, quick-to-anger father, who was plagued by his own father’s abuse. He remembers his beloved maternal grandfather, who, like himself, lived his life in service to God. And, of course, he thinks back to his mother, whose beauty was rivaled only by that of the gardens she so lovingly tended. Though the memories may be very much alive, the people connected to them are all buried near the oldest tree in Hill Crest Cemetery.

But what about the people his age? What about his best friend and blood-brother from childhood? And the boy who received a harsh punishment that rightfully should have gone to the young Timothy?

Arriving at the town’s picturesque square, Father Tim is pleased to find a few familiar storefronts. But trying to find the people he’s looking for only leads to frustration. Until, that is, the small town rumor mill kicks in. He receives an invitation to have tea with two women, one of whom was his long ago fiancée.

Slowly, the people from his past help illuminate for Father Tim his life and his family. For the first time he turns fully toward the memories of his childhood in Holly Springs and lets them flood over him. He’s grateful to sleep in the same room he slept in as a child. He’s thankful for the grace that allows forgiveness to take the place of resentment and anger in many of his relationships.

Finally, the author of the mysterious note that brought him to Holly Springs is revealed. The answer to this mystery also leads Father Tim closer to understanding his parents and why, so many years ago, a beloved family friend disappeared without saying goodbye.

But with these answers come another question, one that will lead Father Tim to an agonizing question: Should he once again seal a brotherhood with his own blood?

Jan wrote her first novel at the age of ten. “The manuscript was written on Blue Horse notebook paper, and was, for good reason, kept hidden from my sister. When she found it, she discovered the one curse word I had, with pounding heart, included in someone’s speech. For Pete’s sake, hadn’t Rhett Butler used that very same word and gotten away with it? After my grandmother’s exceedingly focused reproof, I’ve written books without cussin’ ever since.”

Several years ago, Karon left a successful career in advertising to move to the mountain village of Blowing Rock, North Carolina, and write books. “I stepped out on faith to follow my lifelong dream of being an author,” she says. “I made real sacrifices and took big risks. But living, it seems to me, is largely about risk.”

Enthusiastic booksellers across the country have introduced readers of all ages to Karon’s heartwarming books. At Home in Mitford, Karon’s first book in the Mitford series, was nominated for an ABBY by the American Booksellers Association in 1996 and again in 1997. Bookstore owner, Shirley Sprinkle, says, “The Mitford Books have been our all-time fiction bestsellers since we went in business twenty-five years ago. We’ve sold 10,000 of Jan’s books and don’t see any end to the Mitford phenomenon.”

“Karon’s deft interweaving of past and present infuses the Mitford saga with new energy.”
—Kirkus Reviews

What do you think Matthew Kavanagh’s last words meant?

Father Tim is surprised that the courthouse was as large as he remembered it. Discuss times you revisited places from your childhood only to discover that things were different than you recalled.

When young Timothy Kavanagh uses a racist epithet, he’s told to read First Corinthians 12:13, which says, “For we were all baptized by one Spirit into one body—whether Jews or Greeks, slave or free—and we were all given the one Spirit to drink.” How do you think it was so easy for people to profess their Christianity while still embracing racism?

Father Tim reflects that since returning to Holly Springs, “his own bear had lumbered up to the wagon.” Discuss what he meant. With what other bears are the characters in this book struggling?

Discuss the instances in Home to Holly Springs where the sins of the father are passed on to the son. Father Tim’s father was a distant and strict person prone to bouts of depression. Why do you think Father Tim’s parenting style wasn’t negatively affected by how his father treated him?

Father Tim wanted to ask his dad, “Why do you hate me?” How do you think he would have reacted if the question had been posed?

As in Jan Karon’s previous novels, food and fellowship go hand in hand. Discuss a few examples in the book where events and people are directly tied to food. What are the foods that you associate with childhood memories or other specific times in your life? Have you carried on those traditions?

Several people in the book say it’s a must to see Graceland before one dies. What are your must-visit destinations?

Do you think the favor Peggy asks of Father Tim is selfish? What would you have done if you were in Father Tim’s shoes?