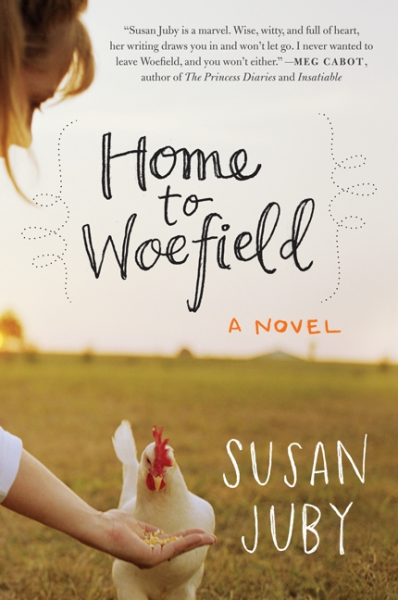 Susan Juby, already a reader-favorite YA author, makes her triumphant first foray into adult contemporary fiction with Home to Woefield, a hilarious, wildly original, and wonderfully insightful tale of no-so-ordinary life down on the farm. Told in four delightfully distinct narrative voices—a crusty 70-something farmer, a hair band-loving teen, a precocious 11-year old, and an earnest New Yorker in her 20s—Home to Woefield will enchant readers of all ages, as its motley cast struggles to avoid foreclosure with outlandish schemes and prize-winning chickens.

Susan Juby, already a reader-favorite YA author, makes her triumphant first foray into adult contemporary fiction with Home to Woefield, a hilarious, wildly original, and wonderfully insightful tale of no-so-ordinary life down on the farm. Told in four delightfully distinct narrative voices—a crusty 70-something farmer, a hair band-loving teen, a precocious 11-year old, and an earnest New Yorker in her 20s—Home to Woefield will enchant readers of all ages, as its motley cast struggles to avoid foreclosure with outlandish schemes and prize-winning chickens.

Prudence Burns, a well-intentioned New Yorker full of back-to-the-land ideals, just inherited Woefield Farm—thirty acres of scrubland, dilapidated buildings, and one half-sheared sheep. But the bank is about to foreclose, so Prudence must turn things around fast! Fortunately she’ll have help from Earl, her banjo-playing foreman with a family secret; Seth, the neighbor who hasn’t left the house since a high school scandal; and Sara Spratt, an eleven-year-old who’s looking for a home for her prize-winning chickens.

Home to Woefield is about learning how to take on a challenge, face your fears, and find friendship in the most unlikely of places

Susan Juby’s young adult fiction, including the bestselling Alice, I Think, has garnered tremendous acclaim. She lives on Vancouver Island, Canada. This is her first adult novel.

A “sweetly cockamamie tale of the emotional, physical, and spiritual recovery of lost souls sharing a neglected farm, a seriously depressed sheep, a coop of fancy chickens, and a last shred of hope. … A wounded little girl and an indomitably hopeful big one book-end this lightly funny and touching yarn about an endearing band of social wrecks who are impossible not to love, at least a little.”—Publishers Weekly

“… In her sparklingly witty and charming first novel for adults, the author of the Alice MacLeod YA series delightfully combines satire and a distinctly modern voice with old-fashioned sweetness, and her laugh-out-loud writing is tempered by the characters’ emotional pain and efforts to help one another heal. Woefield Farm may not produce a single crop, yet it’s fertile ground for superb storytelling.”—Booklist

“A wonderful juxtaposition of parody and playfulness, Home to Woefield is a joyous book about someone living out a fantasy, confronting illusions, and attempting to make a dream come true.”—New York Journal of Books

“Susan Juby is a marvel. Wise, witty, and full of heart, her writing draws you in and won’t let go. And just when you think it can’t get any better, it does. I never wanted to leave Woefield, and you won’t, either.”—Meg Cabot, author of  The Princess Diaries and Insatiable

What is the significance of family in Woefield?  How does the definition of family evolve throughout the novel?  Earl and Sara have opposite experiences with biological family over the course of the book: Sara is distanced from her family, and Earl is reunited with his brother.  What are the positives and negatives of both these situations?

Before leaving Sara at Woefield, Mrs. Spratt attempts to hide the actions of her abusive husband.  She tells Prudence that it is the neighbours who want the chickens gone, she sits in her car at night, and she has planted the largest bush in the neighbourhood in front of her picture window.  Do you think that Mrs. Spratt taking off and leaving Sara at Woefield took strength, or is it another form of hiding?  What else could she have done to make things easier for Sara?  Will Sara and her mother be able to resume a meaningful relationship?  How will Sara’s father factor in?

The chapter with the Mighty Pens writing group is a satire of the creative writing group experience.  Are there other examples of satire in the novel and what role does satire play?

After her trip to the bank, Prudence thinks that “Our energy affects the things we create.”  Do you think that this true in Woefield for some or all of the characters?  If so, how does the energy of the characters affect the outcome of their actions?

The course of the book could be seen as “recovery” for each of the characters: Sara from her family problems, Seth from alcoholism, Earl from his past with his brothers.  Prudence has several comparatively minor problems with her boyfriend and her writing career at the beginning of the book.  Is Prudence in recovery?  Why or why not?

Prudence grew up going to boarding school, and though she corresponded with her uncle who owned Woefield, he didn’t seem to be interested in actual farming.  Where do you think Prudence’s enthusiasm for farming and environmentalism originated?  What could have fostered such an intense interest in rural life in a young woman from New York?

The contrast between the values and opinions of Prudence and Eustace is quite significant.  Do you think that their relationship stands a chance?

Why do you think Sara relates to Left Behind even though she lacks a religious background?  Does her interest in the book help or hinder her ability to cope with the problems in her life?

Seth’s personality changes when he drinks.  If his drinking works as a coping method to help him deal with other people, why do you think that he still stayed home for all of those years?

At the end of the novel, Prudence and her friends have successfully put on their bluegrass concert, however, we’re not certain what the future of the farm will be.  With their best efforts, do you think that Prudence and friends will be able to keep Woefield afloat?  Why or why not?  Prudence still hasn’t realized her dream of working behind a table groaning with organic produce at the farmer’s market.  Do you think that she can realize this dream?