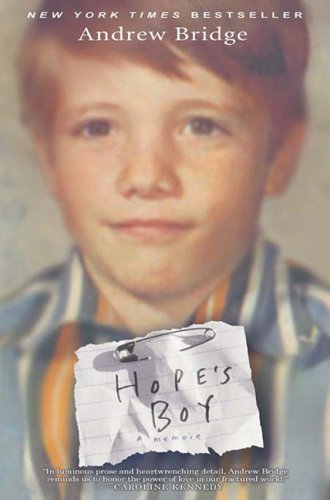 From the moment he was born, Andrew Bridge and his mother Hope shared a love so deep that it felt like nothing else mattered. Trapped in desperate poverty and confronted with unthinkable tragedies, all Andrew ever wanted was to be with his mom. But as her mental health steadily declined, and with no one else left to care for him, authorities arrived and tore Andrew from his screaming mother’s arms. In that moment, the life he knew came crashing down around him. He was only seven years old.

Hope was institutionalized, and Andrew was placed in what would be his devastating reality for the next eleven years—foster care.

From the moment he was born, Andrew Bridge and his mother Hope shared a love so deep that it felt like nothing else mattered. Trapped in desperate poverty and confronted with unthinkable tragedies, all Andrew ever wanted was to be with his mom. But as her mental health steadily declined, and with no one else left to care for him, authorities arrived and tore Andrew from his screaming mother’s arms. In that moment, the life he knew came crashing down around him. He was only seven years old.

Hope was institutionalized, and Andrew was placed in what would be his devastating reality for the next eleven years—foster care. After surviving one of our country’s most notorious children’s facilities, Andrew was thrust into a savagely loveless foster family that refused to accept him as one of their own. Deprived of the nurturing he needed, Andrew clung to academics and the kindness of teachers. All the while, he refused to surrender the love he held for his mother in his heart. Ultimately, Andrew earned a scholarship to Wesleyan, went on to Harvard Law School, and became a Fulbright Scholar.

Andrew has dedicated his life’s work to helping children living in poverty and in the foster care system. He defied the staggering odds set against him, and here in this heartwrenching, brutally honest, and inspirational memoir, he reveals who Hope’s boy really is.

Formerly the CEO/General Counsel of The Alliance for Children’s Rights, Andrew Bridge lives in New York City. He remains a dedicated and vocal advocate for children in foster care.

“Bridge, a Harvard Law School graduate who has devoted his career to children’s rights, has provided remarkable insights into a dark corner of American society.” —Publishers Weekly

“In luminous prose and heartwrenching detail, Andrew Bridge reminds us to honor the power of love in our fractured world.” —Caroline Kennedy

“Andrew Bridge has written an affecting, moving memoir which in the end is a poignant cry for rethinking our foster care system. Hope’s Boy will stay with you long after you’ve put it down.”
—Alex Kotlowitz, author of There Are No Children Here and The Other Side of the River

Hope was a young woman who grew up in poverty, spent time in children’s homes as a little girl, then met an older man, married him, and left high school before graduating. Given her circumstances, do you think that Hope did as much as she could? Should she have done more? Were there qualities that you liked about her? What impact might Hope’s own background in a children’s home have had on her?

Have you ever seen a situation of a young mother like Hope clearly struggling to keep and care for her child? What was your own response to seeing the situation? Were you hesitant to offer help? Did you call authorities?

Andy’s grandmother Katherine was an impoverished widow who worked as a secretary in downtown Chicago. In the brief time that she and Andy lived together, she played a stabilizing influence in his life. Was Katherine wrong to give Andy up after his mother demanded that he be sent to California?

Katherine later admitted to Andy that she felt that she could have never offered the material advantages that the Leonards appeared to have, like a large house and a pool in a middle class suburban neighborhood. While Andy was in foster care, how important do think his relationship with his grandmother was? Should officials have been required to help with telephone calls or even travel expenses for them to visit one another? If Katherine could have taken Andy but needed financial support to care for him properly, should officials have offered her that support?

Andy’s foster mother, Mrs. Leonard, was a child survivor of a concentration camp. How much of that experience do you think influenced her parenting, as a mother and foster mother? Did the trauma of Mrs. Leonard’s early childhood make her behavior understandable?

A sheriff’s deputy and county social worker took Andy from Hope when he was seven years old. After all that they had been through in the two and a half years that they had lived together, did the depth of Andy’s love for Hope at such a young age and his refusal to surrender that love surprise you?

While Andy holds on to his memory of Hope and refuses to surrender her as his mother, another foster child Jason is far more willing to accept the Leonards as his new parents. Jason seems to abandon his own birth family. What did you think of Jason? Did he ask too much of the Leonards? Should officials have pressured the Leonards to take him back, after he ran away?

Foster parents are provided monthly stipends intended to cover food, board, clothing and other incidentals. In many states, the monthly payments are quite small. Should foster parents be regarded more like paid employees or like charitable volunteers? Should we expect foster parents to put up with the same level of behavior that they would from their own children?

While Andy is preparing for his sixth grade graduation, he finds that he had left his dress shirt crumbled in the corner of his bedroom closet. Fearing Mrs. Leonard’s wrath, he frantically tries to smooth out the wrinkles but Mrs. Leonard discovers him. In a moment of kindness, she teases Andy and agrees to iron the shirt. Andy hugs her, not wanting to let go. What were your thoughts on that moment? Why do you think Andy clung to her?

Andy refused to tell classmates at school about the fact the he was a foster child or anything about his mother Hope. If you were a foster parent, what would you have told Andy to say when other children or classmates asked him about his past or his parents? Would it be right to tell him to lie to protect himself? Should he have simply been told to tell the truth?

While in foster care, Andy’s most important relationships were with his teachers – especially with Mrs. O’Malley in fifth grade and Mrs. Ross in twelfth grade. Did you have any similar relationships with your childhood teachers?

Mrs. Leonard’s rages were unpredictable and episodic. Do you think that officials could have done anything more to discover them? Given the importance of Andy’s teachers and schools, do you think that he would have been better off moved to a different home and therefore a different school? Andy talks about his mistrust, even fear of social workers. Did that surprise you?

Throughout his childhood, the Leonards refused to adopt Andy even after the court had determined that he would never return to Hope. Should officials have asked the Leonards to adopt Andy? If the Leonards refused, should Andy have been moved to a new family that would adopt him? Had Andy been adopted, what role, if any, should Hope have played in his life? Would you consider adopting a foster child? Why or why not?

What do you think are the greatest problems confronting impoverished families today? What are your thoughts on parents who have their children taken from them? Should officials have done more to keep Hope and Andy together or to allow them to continue to have a relationship while he was in foster care? Were they right to prevent Hope from seeing Andy after she arrived at the Leonards’ home in the middle of the night?

When Andy is getting ready to leave for college, he steals a picture of Jason and himself from Mrs. Leonard’s scrapbook of children. Was he right to have stolen the picture? Why do you think that he stole it?

What are your thoughts on broken relationships between parents and their children? Are these relationships ones that are worth keeping despite the emotional cost? What do you think of Andy’s willingness to forgive Hope? Should Hope be forgiven? Was there anything to forgive Hope for?

What are your thoughts on fostering, adopting, or mentoring a child in state care? What special skills do you possess that might be worth sharing with a child or family in need? Is there something that you could do to help a child in the foster care system or to improve the overall quality of the system?

Did Hope’s Boy change your view of what it is like to grow up in foster care? Of all the stories in Hope’s Boy, what scenes were the most memorable, the most painful, the most inspiring?