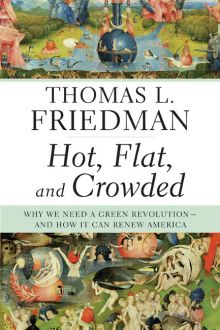 Author of the number one bestseller The World Is Flat and one of America’s most respected columnists, Pulitzer Prize–winning journalist Thomas L. Friedman has transformed the way we see the world, and he has transformed the way we talk about the most important issues of our time. With Hot, Flat, and Crowded, Friedman is poised to spark his most powerful conversations yet, taking on the interlinked woes of skyrocketing fuel costs, diminishing natural resources, and a planet that seems unable to sustain us in the future. But Friedman is no naysayer. On the contrary: he is optimistic that the twenty-first century can become a time of extraordi nary achievement—from tackling the energy crisis to lifting scores of the earth’s inhabitants from poverty.

Author of the number one bestseller The World Is Flat and one of America’s most respected columnists, Pulitzer Prize–winning journalist Thomas L. Friedman has transformed the way we see the world, and he has transformed the way we talk about the most important issues of our time. With Hot, Flat, and Crowded, Friedman is poised to spark his most powerful conversations yet, taking on the interlinked woes of skyrocketing fuel costs, diminishing natural resources, and a planet that seems unable to sustain us in the future. But Friedman is no naysayer. On the contrary: he is optimistic that the twenty-first century can become a time of extraordi nary achievement—from tackling the energy crisis to lifting scores of the earth’s inhabitants from poverty.

A rallying cry that harkens back to the Greatest Generation as well as the era of sweeping 1960s social reforms, Hot, Flat, and Crowded offers provocative yet realistic solutions that take into account Friedman’s first hand, frontline research from every corner of the earth. Presenting a riveting tour of power brokers and ordinary citizens in the Middle East, Asia, Africa, South America, Europe, and North America, Friedman equips readers with essential knowledge about the unprecedented transformations occurring in global commerce, geopolitics, and other aspects of the international stage. Synthesizing this reporting into an ambitious national strategy, Friedman declares that “geo-greenism” is not only vital but also economically sound—a key component in spurring new levels of prosperity and productivity for Americans from all walks of life. A sweeping action plan for the Greenest Generation, Hot, Flat, and Crowded translates dire headlines into an exhilarating proposal that will mobilize Main Street and Wall Street with equal zeal.

Thomas L. Friedman is a three-time Pulitzer Prize—winner and the author of From Beirut to Jerusalem, winner of the National Book Award for nonfiction, The Lexus and the Olive Tree: Understanding Globalization, Longitudes and Attitudes: Exploring the World After September 11, and The World Is Flat: A Brief History of the Twenty-first Century. He lives in Bethesda, Maryland, with his family.

“Like it or not, we need Tom Friedman. …By and large [he] gets the big issues right.”
—The Washington Post Cover Review

“A compelling manifesto that deserves a wide reading, especially by members of Congress and candidates for President.” —The Boston Globe

“New York Times columnist and globalization exponent Thomas Friedman pleads for Americans to wake up to the perils and opportunities of an emerging resource-strapped world. The author comes across as a blend of Will Rogers, Jack Welch and Norman Vincent Peale—a plain-spoken citizen outraged at the bullheadedness of U.S. politicians, yet optimistic about the power of ingenuity and finely crafted policy to avert disaster.” —Newsweek

Discuss chapter one’s title, “Where Birds Don’t Fly,” and the story behind it. How has this bunker mentality affected America’s role as an agent for positive change in the global arena?

In what ways did Hot, Flat, and Crowded help you understand the history of the energy crisis and high fuel prices, from Carter-era progressivism through the Reagan era and beyond? What aspects of this history surprised you the most?

Friedman begins by outlining three trends that capture diverse American attitudes toward energy consumption, climate change, and biodiversity: the “dumb as we wanna be” approach, found even among the political elite; the “subprime nation” mentality of borrowing our way to prosperity; and the optimism of innovators who want to do what’s right. Which attitude prevails in your community?

Discuss the factors that have shaped the Energy-Climate Era: overcrowding due to population growth and longevity, the flattening of the world due to the rise of personal computers and the Internet, the fall of the Soviet Union, and other developments. How have these factors affected America economically, politically, and otherwise?

In your community, who has the most obvious case of affluenza? How would these groups fare under Chinese capitalism? Do you agree with Friedman’s prediction that Chinese capitalism will signal the death of the European welfare state? What other repercussions will rising affluence within the Chinese middle class be likely to have?

Friedman describes his visit to an ultra-green Wal-Mart in McKinney, Texas, and the highly unecological urban sprawl he had to ride through to get there (chapter three). In what way is this a microcosm of America’s current approach to Code Green?

Friedman’s first law of petropolitics states that as the price of oil goes up, the pace of freedom goes down. Why is this so often true? Did this principle apply to prosperity for American oil companies in the early twentieth century? What are the ramifications of Friedman’s second law of petropolitics, “You cannot be either an effective foreign policy realist or an effective democracy-promoting idealist without also being an effective energy-saving environmentalist”?

In chapter five, Friedman describes the controversy that ensued when meteorologist Heidi Cullen tried to educate her audience about global warming. What is the best way to inform those who tune out such messages, which they believe are tantamount to “politicizing the weather”?

What did you discover about the importance of biodiversity by reading Hot, Flat, and Crowded? Why do the efforts of groups such as Conservation International receive less attention than climate-change studies, though Friedman asserts that they are equally crucial?

Discuss the proposal in chapter seven that ending “energy poverty” is a key to healing third-world populations, particularly in Africa. What is the best way to balance the need for energy in these regions with the destructive effects of powersupply emissions? What is the best way to overcome the political instability that has stymied the growth of power grids in these locales?

At the heart of Friedman’s argument is the notion that market demands drive innovation. What would it take to transform America’s perception so that the Code Green message is seen as a key to prosperity? How has the image of environmentalism changed during your lifetime?

Friedman decries halfhearted attempts at environmental change, comparing them to a party rather than a revolution. At your workplace, in your neighborhood, and within your circle of friends, is it fashionable to go green? Is it taken seriously enough to become a bona fide movement, and then a revolution, where you live?

Chapter nine probes the political hurdles that have to be surmounted in order to effect meaningful ecological change. In the book’s concluding passages, Friedman even admits to admiring the efficiency with which Chinese autocrats can enact immediate change. What should the role of government be in the face of a looming ecological crisis? How much government control is too much? Could a politician get elected in America by proposing higher fuel taxes and other disincentives for energy consumption?

Discuss chapter ten’s economic principle that REEFIGDCPEERPC is less than TTCOBCOG (Renewable Energy Ecosystem for Innovating, Generating, and Deploying Clean Power, Energy Efficiency, Resource Productivity, and Conservation is less than The True Cost of Burning Coal, Oil, and Gas). How does this apply to your world? Why has America been slow to believe that REEFIGDCPEERPC is affordable?

Are any of the ideas described in Friedman’s “futuristic” scenario (such as the Smart Black Box, smart grids, RESUs instead of cars, and energy costs that vary according to time of day) already in the works in your state?

Chapter eleven includes a proposal that the alternative-energy movement needs an economic bubble, similar to the one that poured staggering amounts of venture capital into the dot-com industry. In your opinion, why hasn’t this happened yet?

Friedman describes a number of innovators and persuaders who have made significant inroads in improving conservation efforts, including an Indonesian imam who was persuaded to acknowledge river pollution, New York taxi drivers who now praise hybrid vehicles, and the U.S. military’s determination to “outgreen” the enemy. What do these agents of change have in common? What should green revolutionaries learn from these experiences?

One of Friedman’s conclusions is that “it is much more important to change your leaders than your lightbulbs.” How will this play out in upcoming elections at all levels, local, state, and federal? What will the legacy of those elected officials be? How can you help to lead the Code Green revolution?

How has the world changed since the publication of Friedman’s earlier books? How is the world now experiencing the effects of situations he covered throughout the 1990s? What human impulses (for example, materialism, benevolence) almost form a theme throughout all his books?