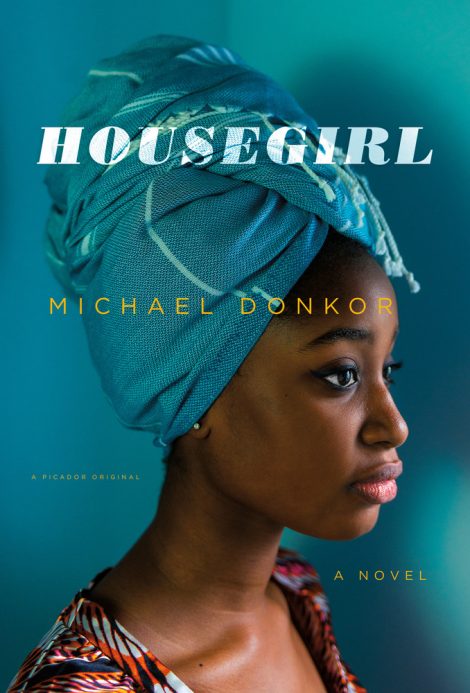 A moving and unexpectedly funny exploration of friendship and family, shame and forgiveness, Michael Donkor’s debut novel follows three adolescent girls grappling with a shared experience: the joys and sorrows of growing up.

Belinda knows how to follow the rules. As a housegirl, she has learned the right way to polish water glasses, to wash and fold a hundred handkerchiefs, and to keep a tight lid on memories of the village she left behind when she came to Kumasi.

Mary is still learning the rules. Eleven-years-old and irrepressible, the young housegirl-in-training is the little sister Belinda never had.

A moving and unexpectedly funny exploration of friendship and family, shame and forgiveness, Michael Donkor’s debut novel follows three adolescent girls grappling with a shared experience: the joys and sorrows of growing up.

Belinda knows how to follow the rules. As a housegirl, she has learned the right way to polish water glasses, to wash and fold a hundred handkerchiefs, and to keep a tight lid on memories of the village she left behind when she came to Kumasi.

Mary is still learning the rules. Eleven-years-old and irrepressible, the young housegirl-in-training is the little sister Belinda never had.

Amma has had enough of the rules. A straight-A student at her exclusive London school, she has always been the pride of her Ghanaian parents—until now. Watching their once-confident teenager grow sullen and wayward, they decide that sensible Belinda is the shining example Amma needs.

So Belinda must leave Mary behind as she is summoned from Ghana to London, where she tries to impose order on her unsettling new world. As summer turns to autumn, Belinda and Amma are surprised to discover common ground. But when the cracks in their defenses open up, the secrets they have both been holding tightly threaten to seep out. 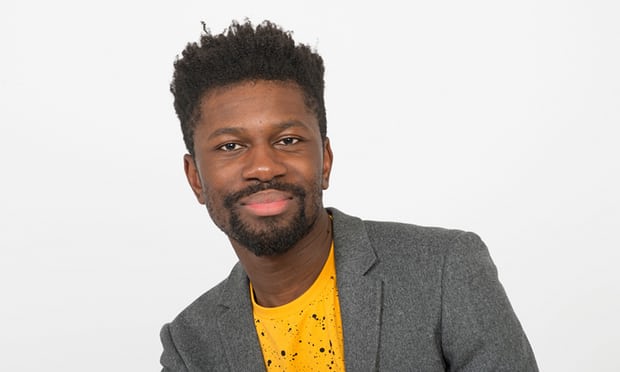 Michael Donkor was born in London, to Ghanaian parents, and teaches English Literature in West London.

“The friendship that gradually develops between Belinda and Amma is very persuasively observed—an intimacy forged through drunken, unsupervised house parties in the long summer after A-levels; wilful misbehaviour at dressy Ghanaian expat gatherings; and backs-to-the-wall standoffs with hostile Jamaican girls on the bus down Coldharbour Lane… Donkor’s principal achievement is the dignity and generosity of spirit with which he imbues a central character from a largely invisible seam of African society.”—Alfred Hickling, The Guardian

“At times, there are flashes of Jane Eyre in Belinda’s role as a ‘governess’ of sorts, but there is no Mr. Rochester to save her from her life, nor a sugary ending. The focus is on the love that flows between women and the need for Belinda to find a place that feels like home…(A) warm and accomplished novel.”—Arifa Akbar, The Observer

“Donkor’s debut novel concerns itself with those who don’t traditionally get much of a look-in when it comes to fiction: two Ghanaian housegirls… A warm and intelligent story,offering full-bodied characters and a fortifying examination of courage.”—The Mail on Sunday

1. The preservation and garnering of material wealth is highly valued by the communities in the novel. Scenes from Aunty and Uncle’s mansion, Nana and the Doctor’s home, the party at the Yeboah’s, and Mary’s funeral are laced with visceral images of decoration, food, and showy displays. How would you characterize Belinda’s relationship with such things?

2. The novel is written in a third-person limited perspective. Each chapter focuses on either Belinda or Amma. How might your understanding of the characters shift if Donkor had written in first-person? What kinds of information might be revealed or, alternately, obscured?

3. Characters in the novel explore different capacities for imagination. For example, Amma creates art, Belinda weaves herself stories and studies literature, and Belinda teaches Mary to inhabit a make-believe character. What function does power of imagination serve, particularly in helping these women face their hardships and traumas? How do their imaginations pair with rationality as a problem-solving skill?

4. Amma’s queerness, her artistic ability, and her intellect all set her apart from those around her. She must constantly decide whether to conform to expectations or defy them, although each relationship offers her unique safe spaces. What does she value in her relationships with Belinda, Nana, Roisin, Helena and her other friends and family?

5. Consider instances of art in the novel. Amma reminisces on Alexander Calder sculptures, Belinda takes a literature course, Belinda sends Amma a Jack Gilbert poem, Amma draws, and at the end of the novel, even Belinda begins to draw. How do the women grow and develop from their encounters with art?

6. As a child, Belinda had to learn how to care for her mother and was subsequently sent away to work as a domestic servant in both Ghana and London. Housework is a coping mechanism she slowly grows independent from. What catalyzes this change? What other forms of caretaking, nurturing and intimacy occur in the novel, and when do they fail to suffice?

7. Belinda’s phone calls with Mary are the main connective tissue between Britain and Ghana after Belinda moves. What makes her so hesitant to share her new life with Mary? What makes London different from home? What things stay the same?

8. At one point, Belinda thinks about “This bad behavior, badness, sickness, strangeness in the blood, handed down from mother to daughter” (168). Think about the characters’ individual histories and the roles those histories play in their daily lives. Are they shaped by their circumstances, or do they fight circumstances?

9. The scene of Mary’s vivid funeral—and the events leading up to it—accounts for the majority of the end of the novel. How does Donkor’s writing style in these chapters relay the stream of emotion Belinda encounters during it all? Does she embrace or reject the traditions?

10. Belinda’s relationship to her mother undergoes a shift over the course of the novel. What is it that makes her decide to go back to her hometown of Aderabaa at the end? What does she have to gain or lose from seeing her mother again?

Belinda fidgeted in the dimness. She sat up, drawing her knees and the skimpy bedsheets close to her chest. Outside, the Imam’s rising warble summoned the town’s Muslims to prayer. The dawn began to take on peaches and golds and those colours spread through the blinds, across the whitewashed walls and over the child snuffling at Belinda’s side.

All those months ago, on the morning that they had started working in Aunty and Uncle’s house, Belinda and Mary had been shown the servants’ quarters and were told that they would have to share a bed. To begin with, Belinda had found it uncomfortable: sleeping so close to a stranger, sleeping so close to someone who was not Mother. But, as with so many other things about the house, Belinda soon adapted to it and even came to like the whistling snore Mary often made. On that bed, each and every night, Mary slept in exactly the same position; with her small body coiled and her thumb stopping her mouth. Now Belinda watched Mary roll herself up even more tightly and chew on something invisible. She thought about shifting the loosened plait that swept across Mary’s forehead.

Belinda turned from Mary and moved her palms in slow circles over her temples. The headache came from having to think doubly: once for Mary, once for herself; a daily chore more draining than the plumping of Aunty and Uncle’s tasselly cushions, the washing of their smalls, the preparing of their complicated breakfasts.

Dangling her legs down and easing herself to the floor, Belinda quietly made her way to the bathroom. She stepped around the controller for the air con they never used and around the remains from the mosquito coil. She brushed by the rail on which their two tabards were hung. Belinda remembered the first time Aunty had said it – ‘tabard’ – and how confused Mary’s expression had become because of the oddness of the word and the oddness of the flowery uniform Aunty insisted they wear when they cleaned. Belinda would miss that about Mary’s face: how quickly and dramatically it could change.

Under the rusting showerhead, Belinda scrubbed with the medicinal bar of Neko. Steam rose and water splashed. In her mind Belinda heard again the sentences Aunty had promised would win Mary round. She yanked at a hair sprouting from her left, darker nipple, pulling it through bubbles. The root gathered into a frightened peak. She liked the sensation.

Returning to the bedroom, in the small mirror she was ridiculous: the heaped towel like a silly crown. For a moment, she forgot the day’s requirements, and flicking her heels she pranced across the thin rug. Would Amma like that? Might jokes help heal that broken London girl? Or perhaps Belinda would be too embarrassed.

Mary shot up from beneath the covers and launched herself at Belinda’s chest. Belinda pushed her off and Mary lost her balance, fell onto the bed.

‘What is this? Are you a –? Are you a stupid –’ Belinda lifted the towel higher. ‘Grabbing for whatever you want, eh?’

‘What you worried for?’ Mary arched an eyebrow. ‘I have seen all before. Nothing to be ashamed for. And we both knowing there is gap beneath shower door and I’m never pretending to be quiet about my watchings neither. You probably heard me while I was doing my staring. Even maybe you seen my tiny eye looking up,’ Mary squinted hard, ‘and you’ve never said nothing about nothing. So I think you must relax now. I only’ – Mary tilted her head left, right, left – ‘wanted to see how yours are different from mine.’ She pulled up her vest and Belinda quickly rolled it down. A ringing quietened in Belinda’s ears.

‘And, and here is me ready to speak about treats for you,’ Belinda began.

‘You mean what? Miss Belinda?’ Mary folded her arms. ‘Adjei! You standing there in a silence to be so unfair. Ad?n? I want to hear of this my special thing. Tell of it!’

‘Less noise, Mary! You know Aunty and Uncle they have not yet woken.’

‘Then tell the secret and I will use my nicest, sweet voice.’

Belinda headed towards the mirror and adjusted its angle slightly. ‘Number one is that we have a day off.’

‘Day. Off. Ewurade. When, when have they ever given us one of those?’ Mary rubbed her hands together. ‘Today no getting them nasty stringy things from the drain in the dishwasher? No scrubbing the coffee stain on Uncle’s best shirt again, even though everyone knows the mark is going to live there forever and ever amen!’

Mary laughed but soon stopped to count her stubby fingers. ‘You said number one. And you said treats not treat. I know the thing called plurals. You speak as if we also having two and three and four and even more. So you have to complete please, Miss Belinda. What else?’

‘Many great gifts from Aunty, Uncle and their guests Nana and Doctor Otuo. Many. But, but I will let them know they should change their minds and their plan. Because why should a naughty little girl get good things?’

‘That question is too easy. Nasty people get nice all the time. Look at Uncle. He is farting in the night and afternoon, and then blaming it on Gardener or anyone else passing.’ Mary threw up her arms. ‘But he still got treasures from the UK and this massive palace he lives in with his own generator, own two housegirls in me and you and all kinds of rich visitors coming in.’

‘Ah-ah! Your Uncle never, never farted! Take that one back.’

‘What else is my treat?’