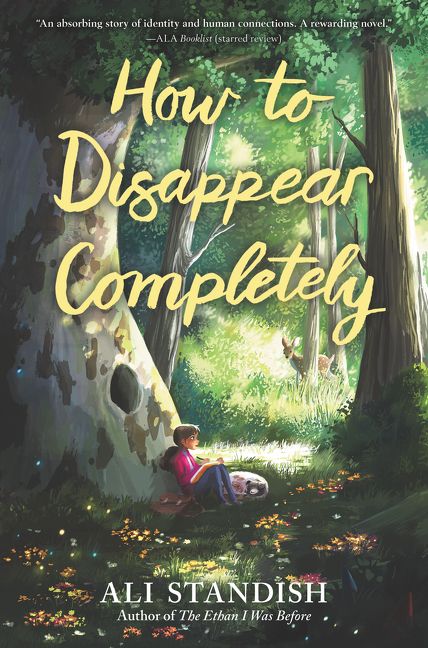 HOW TO DISAPPEAR COMPLETELY

Wonder meets Some Kind of Happiness in this powerful tween novel from Ali Standish, author of the Carnegie Medal nominee The Ethan I Was Before and August Isle.

While her grandmother was alive, Emma’s world was filled with enchantment. But now Gram is gone, and suddenly strange spots are appearing on Emma’s skin. Soon, she’s diagnosed with vitiligo—a condition that makes patches of her skin lose their color—and the magic in her world is suddenly replaced with school bullies and doctor appointments.

Wonder meets Some Kind of Happiness in this powerful tween novel from Ali Standish, author of the Carnegie Medal nominee The Ethan I Was Before and August Isle.

While her grandmother was alive, Emma’s world was filled with enchantment. But now Gram is gone, and suddenly strange spots are appearing on Emma’s skin. Soon, she’s diagnosed with vitiligo—a condition that makes patches of her skin lose their color—and the magic in her world is suddenly replaced with school bullies and doctor appointments.

But when Emma writes one last story in the journal she shared with Gram, something strange happens. Someone writes back to her, just like Gram used to. Who’s writing to Emma? And just what is her story going to be, now that everything is so different?

Award-winning author Ali Standish explores the ways life transforms us, and how we learn to let go of what we must while still holding fast to who we are.

Ali Standish, author of the critically acclaimed The Ethan I Was Before, August Isle, and Bad Bella, grew up in North Carolina and spent several years as an educator in the Washington, DC, public school system. She has an MFA in children’s writing from Hollins University and an MPhil in children’s literature from the University of Cambridge. She lives in Raleigh with her husband, Aki, and their two rescue dogs, Bella and Keeper.

“When Emma discovers the first spot, “like a tiny bright moon” on her left foot, she’s at the funeral of her grandmother, who had been her best friend as well. The diagnosis is vitiligo, a skin condition triggered by stress. Creating a large multi generational cast, Standish knits an absorbing story of loss, identity, and human connections. A rewarding, realistic novel, illuminated by magical elements.” – Booklist (starred review)

“Seamlessly blending childhood wonder with the slow lessons of maturity, this tale succeeds in celebrating curiosity, thoughtfulness, and collaboration, centering on relatable characters who welcome readers into their world.” – Publishers Weekly

The spot appears on the morning of Gram’s funeral.

It arrives unannounced and uninvited, like a fly buzzing around a picnic.

Not that my life is a picnic today.

Or maybe the spot has been there for a while, and I just haven’t noticed. Maybe the only reason I notice the little white circle now is because I’ve been staring at my lap ever since I sat down in the front pew.

If I were wearing black tights, like Mom told me to, I probably wouldn’t have noticed the spot just between my big toe and my second. But when I searched my room earlier this morning, every pair I owned seemed to be ripped, or covered in Boomer hair.

We didn’t have time to run to the store to buy a new pair. I know because Mom said that three times before saying I would just have to go to the church “as is.”

“As is” is an insult when it comes from Mom.

“It’s still warm out,” I reminded her. There’s a whole week left before school starts, after all. “I don’t need tights.”

Just then, Lily came gliding down the stairs, flawless as usual, from her shiny long hair to her own sleek black tights.

Lily is my older sister, in case you didn’t know, which you didn’t, because I’ve only just started the story.

There are two other things you need to know about Lily:

2. She is going to Yale to study English next year, even though technically she has not applied yet, but she will definitely get in (see #1 above).

She stood shoulder to shoulder with Mom. You can tell that Lily is Mom’s daughter, not because they have the same complexion or eyes or hair, but because they are both the same kind of very polished pretty. Lily had spent the hour before locked in the bathroom we share, curling her hair and perfecting her makeup.

I can’t remember the last time I looked at my reflection in a mirror except to get something out of my teeth.

Dad came rushing down a moment later, and I was relieved when Mom pounced on his crooked tie, forgetting all about my tightlessness. Then we were off.

And now here I am, sitting in the church, staring at the white spot on my left foot while the minister talks about God and heaven and angels.

Now that I’ve seen the spot, I can’t stop staring at it. I blink at the paleness of it against my skin, like a tiny bright moon.

I think of this one time Gram took me to the meadow by the river to sit with her while she painted. Well, we did that all the time, but this time, I started pulling the paints from the old leather satchel she carried them around in and reading all their names. They were called things like “icebox plum” and “whitening willows.”

Gram looked at me thoughtfully. Then she said, “You, Emma, are the color of afternoon light settling on the trees in the Spinney.”

“You can’t fit that on the back of a tube of paint!” I protested. Gram was always saying stuff like that, like she was a poet instead of a painter. But secretly, I’d been proud.

Spinney is an old-fashioned word for a little forest, by the way. And the Spinney is the place where I wish more than anything I could be right now.

I think the spot must be some kind of stain. I lick my finger and lean down, rubbing at it. It doesn’t fade like marker or paint would. Another, more alarming thought floats into my brain. What if I’ve managed to bleach my skin somehow? It seems like something I would do. If I have, Mom. Will. Kill me.

As if to prove me wrong, she reaches an arm around my shoulders and gives me a reassuring squeeze. She probably thinks I’m looking down because I’m crying. I cross my right foot over my left so she can’t see the spot.

It seems like almost everyone in Lanternwood has shown up today for Gram’s funeral. A glance back reveals Ruth and Gloria and the rest of the garden club sitting directly behind our pew, all of them wearing big black hats. Old Joe and Older Joe (who used to be Young Joe and Old Joe) have taken the morning off from the farm and sit side by side, their few strands of hair slicked back and their heads bowed respectfully.

Even villagers who didn’t know Gram very well showed up to say goodbye to her. There are lots of people I know by face but not by name, like the Apple Lady. She never spoke to Gram as far as I could tell, but this morning she’s in the back pew, next to a family with two little kids I don’t recognize. Their mom is sniffling into a tissue.

I know I should probably be crying, too. I should be thinking about Gram, not some weird spot. And you should know that I do think about her, all the time since she died. It’s just hard for me to think about her here.

The old stone-and-brick church is just down High Street from her house, but I never saw her come inside. Sometimes, we would take Boomer and walk through the graveyard, searching the mossy gravestones for funny names or making up stories for how the people under them died. (In the old section, of course—not the new one, where people still put flowers by the stones.)

Anyway, you would be surprised by how many people died in the killer skunk attacks of 1919, including poor Billy Snagglehook, May God Rest His Soul.

But mostly, we spent our time in the Spinney or down by the river, where Gram told me fairy tales while she painted.

In fairy tales, things are always changing into something else. Pumpkins turn into carriages, frogs into princes, mermaids into girls. Nothing is ever what it seems. Nothing ever stays the same. And I guess that’s the way it is in real life, too.

Gram didn’t tell us she was sick until a couple of months ago. Not until she knew she was going to die. I still didn’t believe it, though. Not until the sickness changed her, turning her into a weak old woman.

Then one day, she fell into an enchanted sleep.

Gram did not wake up. Gram is never coming home.

And with her gone, I don’t know how the story is supposed to go.