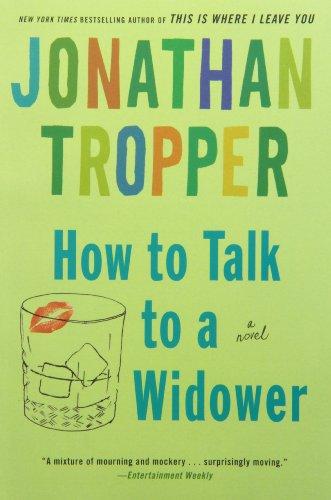 HOW TO TALK TO A WIDOWER

Now the acclaimed author of The Book of Joe and Everything Changes tackles love, lust, and lost in the suburbs—in a stunning novel that is by turns heartfelt and riotously funny.

Doug Parker is a widower at age twenty-nine, and in his quiet suburban town, that makes him something of a celebrity—the object of sympathy,

Now the acclaimed author of The Book of Joe and Everything Changes tackles love, lust, and lost in the suburbs—in a stunning novel that is by turns heartfelt and riotously funny.

Doug Parker is a widower at age twenty-nine, and in his quiet suburban town, that makes him something of a celebrity—the object of sympathy, curiosity, and, in some cases, unbridled desire. But Doug has other things on his mind. First there’s his sixteen year-old stepson, Russ: a once-sweet kid who now is getting into increasingly serious trouble on a daily basis. Then there are Doug’s sisters: his bossy twin, Clair, who’s just left her husband and moved in with Doug, determined to rouse him from his grieving stupor. And Debbie, who’s engaged to Doug’s ex-best friend and manically determined to pull off the perfect wedding at any cost.

Soon Doug’s entire nuclear family is in his face. And when he starts dipping his toes into the shark-infested waters of the second-time around dating scene, it isn’t long before his new life is spinning hopelessly out of control, cutting a harrowing and often hilarious swath of sexual missteps and escalating chaos across the suburban landscape.

Jonathan Tropper is the author of Everything Changes, The Book of Joe, which was a BookSense selection, and Plan B. He lives with his wife, Elizabeth, and their children in Westchester, New York, where he teaches writing at Manhattanville College. How to Talk to a Widower was optioned by Paramount Pictures, and Everything Changes and The Book of Joe are also in development as feature films.

“Tropper has the twentysomething guy thing down to a science. His prose is funny and insightful, his characters quirky and just a bit off-balance but decent enough to take to our hearts.”
—Booklist

“Tropper’s Latest is a resigned yet hopeful examination of grief with a side of human absurdity… warm and modestly knowing, with a wisecracking slacker hero.” —Kirkus Reviews

Doug suffered a tragic and sudden loss, but in the fall-out of this event hasn’t always behaved the way one would hope to if in his shoes. Do you empathize with Doug or is his self-destructive behavior a detriment to his character? What allowances would you give to someone who is grieving, and when do their actions become unforgivable?

What are Doug’s views on marriage both before and after meeting Hailey? Do they change after he loses his spouse? Do you foresee him eventually remarrying?

Following his stroke, Doug’s father underwent a personality change. Describe how this changed his relationship with his family, especially with his son. Does Doug see him as a role model; why or why not? Discuss the parallels between father and son after a traumatic event.

How would the story be different if it were not told in the first-person narrative? Is Doug’s omniscient perspective at the heart of the novel? How would the tone change if it were being told by someone outside looking in at Doug?

How does the novel’s suburban setting play a role? What is the author’s attitude about living in the suburbs? Do you think the portrayal of the town is meant to be satirical?

The author is a man–were you reminded of this while reading the novel? Would a female author writing this story have as effectively portrayed the macho attitude and competitiveness that exists between the male characters?

“I had a wife. Her name was Hailey. Now she’s gone. And so am I.” This passage appears on pages 74, 141, 282, 329, and 330 and serves as a mantra. When Doug repeats it, do you think this “reality check” provides him with comfort or is it destructive to his recovery? Does its meaning, or his reasons for evoking the mantra, evolve?

Do you feel that Doug overcomes his grief? Does it change him; if so, how? Does grieving necessarily change a person? Can it be treated like other ailments that one conquers, or is it a permanent part of the sufferer, something that continues to live within them, ever changing but present?

Discuss the significance of setting. How are family dynamics illustrated by their surroundings and locale? Is Hailey’s home and her belongings another character that haunts this story–the bra left hanging on the bathroom doorknob, the bottles of perfume collecting dust on her dresser?

How do the author and his protagonist use humor both in the sense of it being a literary tool, and as a way the characters relate to each other?

Doug’s extended family is as endearing as they are dysfunctional. How do they compare to your ideal definition of a family?

Compare Doug’s relationships with his two sisters–Claire, his twin, and Debbie, the youngest. What role does being a twin serve in Doug’s life? How does Debbie’s wedding bring out the individual struggles of many of the characters in the novel?

Discuss betrayal as it manifests itself across a wide range of connections–between spouses, friends, and siblings.

“The course of true love is never straight.” (page 338) This is true for several of the characters. Do you think it is a universal truth? Is love so simple that people turn it into something which is complicated, or is it as complex as the people it involves?

Are you optimistic at the end of the novel that life will improve for Doug?