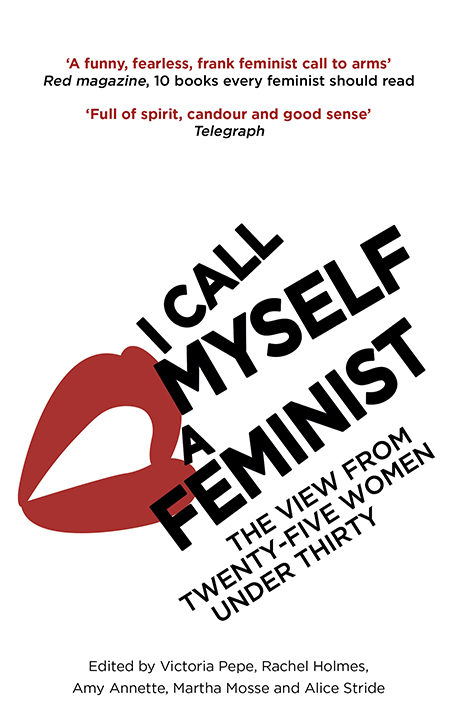 I CALL MYSELF A FEMINIST

Is feminism still a dirty word? We asked twenty-five of the brightest, funniest, bravest young women what being a feminist in 2015 means to them.

We hear from Laura Bates (of the Everyday Sexism Project), Reni Eddo-Lodge (award-winning journalist and author), Yas Necati (an eighteen-year-old activist), Laura Pankhurst, great-great granddaughter of Emmeline Pankhurst and an activist in her own right, comedian Sofie Hagen, engineer Naomi Mitchison and Louise O’Neill, author of the award-winning feminist Young Adult novel Only Ever Yours. Writing about a huge variety of subjects, we have Martha Mosse and Alice Stride on how they became feminists,

Is feminism still a dirty word? We asked twenty-five of the brightest, funniest, bravest young women what being a feminist in 2015 means to them.

We hear from Laura Bates (of the Everyday Sexism Project), Reni Eddo-Lodge (award-winning journalist and author), Yas Necati (an eighteen-year-old activist), Laura Pankhurst, great-great granddaughter of Emmeline Pankhurst and an activist in her own right, comedian Sofie Hagen, engineer Naomi Mitchison and Louise O’Neill, author of the award-winning feminist Young Adult novel Only Ever Yours. Writing about a huge variety of subjects, we have Martha Mosse and Alice Stride on how they became feminists, Amy Annette addressing the body politic, Samira Shackle on having her eyes opened in a hostel for survivors of acid attacks in Islamabad, while Maysa Haque thinks about the way Islam has informed her feminism and Isabel Adomakoh Young insists that women don’t have to be perfect. There are twelve other performers, politicians and writers who include Jade Anouka, Emily Benn, Abigail Matson-Phippard, Hajar J. Woodland and Jinan Younis.

Is the word feminist still to be shunned? Is feminism still thought of as anti-men rather than pro-human? Is this generation of feminists – outspoken, funny and focused – the best we’ve had for long while? Has the internet given them a voice and power previously unknown?

Rachel Holmes‘ most recent book is Eleanor Marx: A Life; Victoria Pepe is a literary scout; Amy Annette is a comedy producer currently working on festivals including Latitude; Alice Stride works for Women’s Aid; and Martha Mosse is a freelance producer and artist.

When a ‘millennial’ young woman calls herself a feminist now, do you feel she is aligning herself to feminism as you see it?

Lisa: Feminism for me has always been a plural term. I have never thought of in the singular – except in the very broadest of senses, such as that in my favourite quip: ‘Feminism is the radical notion that women are people.’ Nor am I fond of prescriptive admonitions.

Given all that, I am very happy with the recent efflorescence of feminism amongst young women. I love to learn from the experience of the millennials and indeed argue with them. We don’t have always to agree about directions or positions.  Then, too, where the spectrum of everyday sexism is concerned, not all that much has changed. The only thing I would urge is that this current wave of feminism in all its variety is not allowed to subside too easily, in the way that so many previous waves have.

Amy, what about when a second generation woman calls herself a feminist? Where do you think the differences occur?

Amy:  I can readily imagine that ‘older’ feminists get annoyed when they feel like newer ‘waves’ of feminists seek to define feminism again – I know from doing some panels at literary festivals that some people feel like younger feminists are re-writing a first chapter to a book that has already been long published. But I wonder if defining for yourself what feminism is shouldn’t be something constantly changing. Maybe the first chapter is staying the same but the introduction needs refreshing every now and again.

I know that for a long time violence against women wasn’t an agenda point on ‘to change’ lists simply because it was so widespread and silently known to be a truth for women that people couldn’t contextualise it. They couldn’t see it to define it as a problem to be fixed. I think defining is powerful and ongoing and so we are all engaging with the same material even if some of us came to it later.

What would you say to your younger or older self, to guide them along feminist lines?

Lisa: Thinking about what I’d say to my younger self is not altogether easy since that woman with all her hopes and innocence in place isn’t all that easy to conjure up again. When experience talks to innocence in this domain, it usually takes the form: – why didn’t you notice at the time that there was so much blatant sexism around you, and when you did, talk back to the man-splainers.

There’s far more awareness of necessary equalities now. As importantly, we live at a time when identity politics are a given: though perhaps, too often, these have taken on the aura of victimhood, rather than agency. One thing I might say to young women now is be a little wary of imprisoning yourself within any single identity – life is bigger than that – and long.

Amy: Something I always think when I look back at pictures of young Amy is ‘give yourself a break’. I’m trying to now give myself that break in the present rather than in hindsight. I would hope my older self can be a part of feminism, politics and the identity of self without too much self-harassing!

Something I wish feminists from the past could know about feminism now is that irony, humour and seemingly flippant attitudes can be a sign of a powerful sense of self and feminism. I love the intricate feminism of ‘meme admins’ on Instagram but I fully understand that’s a difficult bundle of sarcasm and internet 2.0 for some to understand. But, it’s still valid.

If you could get all the world leaders together to agree to implement one policy to improve the lives of women – what would it be?

Amy: When I set you this question, Lisa, I didn’t think it would come back to me! It’s hard!

I think if I had to choose one thing it would end up being an amalgam of right to education and right to freedom from violence. It seems these two policies are interlinked by value: the value of a woman or non-gender-binary individual’s life.

Policy-wise I think we are in a dangerous place here in the UK with the cavalier attitude to council cuts meaning victims of domestic abuse are at risk not just from their abusers but a government policy that leaves them to fend for themselves. The work of Sisters Uncut is one example of a positive movement facing an extremely negative problem, as per your last question.

Lisa: Make sure there are women on all groupings deliberating the peace treaties that follow on wars – it’s been found that peace lasts longer if women have been part of this process. Instigate programmes where Aid money is given not through governments but directly into women’s hands.

Do you feel hopeful when you think about the future of the women’s movement?

The increase in understanding of a need for an intersectional feminism is, for me, part of a wider move to make sure feminism is relevant to all people and all injustices, stopping the movement from sticking itself into a monotone cul-de-sac.