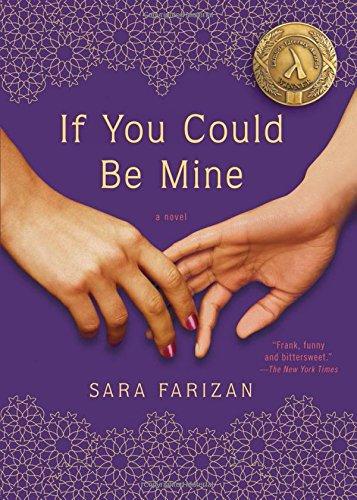 IF YOU COULD BE MINE

In this stunning debut, a young Iranian American writer pulls back the curtain on one of the most hidden corners of a much-talked-about culture.

Seventeen-year-old Sahar has been in love with her best friend, Nasrin, since they were six. They’ve shared stolen kisses and romantic promises. But Iran is a dangerous place for two girls in love—Sahar and Nasrin could be beaten, imprisoned, even executed if their relationship came to light.

So they carry on in secret—until Nasrin’s parents announce that they’ve arranged for her marriage. Nasrin tries to persuade Sahar that they can go on as they have been,

In this stunning debut, a young Iranian American writer pulls back the curtain on one of the most hidden corners of a much-talked-about culture.

Seventeen-year-old Sahar has been in love with her best friend, Nasrin, since they were six. They’ve shared stolen kisses and romantic promises. But Iran is a dangerous place for two girls in love—Sahar and Nasrin could be beaten, imprisoned, even executed if their relationship came to light.

So they carry on in secret—until Nasrin’s parents announce that they’ve arranged for her marriage. Nasrin tries to persuade Sahar that they can go on as they have been, only now with new comforts provided by the decent, well-to-do doctor Nasrin will marry. But Sahar dreams of loving Nasrin exclusively—and openly.

Then Sahar discovers what seems like the perfect solution. In Iran, homosexuality may be a crime, but to be a man trapped in a woman’s body is seen as nature’s mistake, and sex reassignment is legal and accessible. As a man, Sahar could be the one to marry Nasrin. Sahar will never be able to love the one she wants, in the body she wants to be loved in, without risking her life. Is saving her love worth sacrificing her true self?

Sara Farizan, the daughter of Iranian immigrants, lives in San Francisco, California. She is an MFA graduate of Lesley University and holds a BA in film and media studies from American University. If You Could Be Mine is her first novel. Look for Sara’s second novel, Tell Me Again How a Crush Should Feel, on sale in October.

“Sharp and moving…an interesting look at gender identity and gay culture in Iran…also a compelling story about class and the purpose of marriage.” —Boston Globe

“Accomplished and compassionate . . . A groundbreaking, powerful depiction of gay and transsexual life in Iran . . . An intimate look at life in modern-day Iran and its surprising Westernization, even though much of this culture is clandestine.” —Booklist, starred review

“Beautiful writing and a gentle and unique story combine to make this a new favorite in the YA section. A great crossover as well; both teens and adults will appreciate this lovely book.” —Connecticut Post

1. “Tehran isn’t exactly safe for two girls in love with each other,” says Sahar on page 2. In what ways is Iran dangerous for gay people? What are the consequences of discovery?

2. Seventeen-year-old Sahar says she has been in love with Nasrin since she was six years old. She is very different from Nasrin—for one thing, she wants to be a doctor, while Nasrin dreams of going to India to be a Bollywood actress. What are some other differences between the two young women? Can you see what attracts Sahar to Nasrin? Do you think they would make a good couple if they were allowed to be together? Why or why not?

3. Was there any point in the novel when you were nervous that Sahar and Nasrin’s romantic relationship would be discovered? Were there any clues that Nasrin’s mother had an idea of what was going on between the girls before she revealed to Sahar that she knew about them?

5. Sahar’s references often reflect American popular culture—Julia Roberts, Cat Stevens, Madonna, Lady Gaga—despite the fact that many Western CDs and DVDs are censored or banned in Iran. Her cousin Ali seems to have no trouble getting his hands on these banned materials. What other “workarounds” for strict governmental policies do Sahar and her friends witness or take part in?

6. Sahar is devastated on page 20 to discover that Nasrin will be marrying a nice doctor named Reza— “the Superman of suitors.” She knew an arranged marriage for Nasrin was inevitable, so why does it still come as such a surprise to Sahar? Does it seem out of character for Nasrin to agree to a traditional marriage? Why or why not?

7. When Sahar’s gay older cousin Ali says to her on page 30, “Sahar, it takes one to know one,” she is furious. She responds, “What you do is wrong, and I’m not like you.” What does Sahar see as the differences between Ali’s choices and behavior and her own?

8. How does Sahar’s angry reaction mirror both Nasrin’s and Katayoun’s responses when Sahar takes them to the gay underground scene at Restaurant Javan? How do Sahar’s judgments of Ali—and others—evolve during the course of the novel?

9. On page 102, Sahar daydreams about what it would be like to be a man in Iran. When she’s thinking about her father, whom she calls Baba, who “can’t even boil water,” she thinks she could leave him in the dust if she were a man. Despite her daydreams of male privilege, she never indicated that she felt like a man trapped in a woman’s body. Were you shocked when Sahar began to seriously contemplate getting a sex change to be with Nasrin? Why or why not?

10. In this novel, readers see the effects of gender- reassignment surgery on several different people, including Parveen, Maryam, Katayoun, and Jamshid. Ali tells her on page 156, “A male version of you would be perverse. It would frighten [Nasrin].” What ultimately persuades Sahar that a sex-change operation is not the right choice for her?

11. Since Sahar’s mother died, her father has been “sleeping through life.” What finally prompts Sahar to confront Baba about his withdrawal? Do you think Sahar’s decision to stay with her father is the right one, even though he admits he is asking her to stay for selfish purposes?

12. When the novel ends, it’s still illegal and potentially dangerous to be gay in Iran. What do you think the future holds for Nasrin? For Sahar? For their relationship?