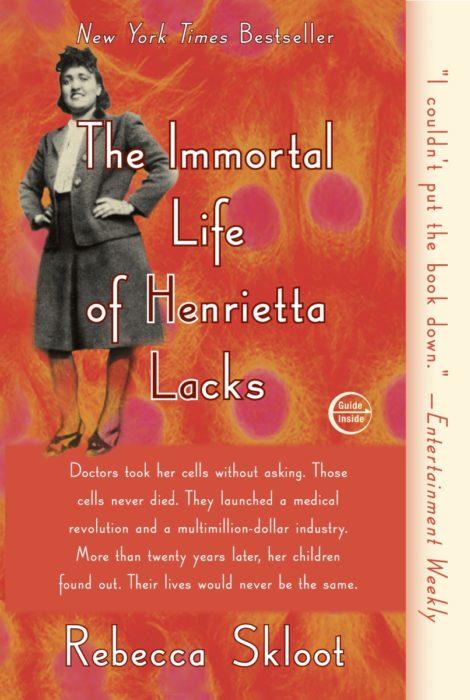 THE IMMORTAL LIFE OF HENRIETTA LACKS

Her name was Henrietta Lacks, but scientists know her as HeLa. She was a poor black tobacco farmer whose cells—taken without her knowledge in 1951—became one of the most important tools in medicine, vital for developing the polio vaccine, cloning, gene mapping, in vitro fertilization, and more. Henrietta’s cells have been bought and sold by the billions, yet she remains virtually unknown, and her family can’t afford health insurance.

Soon to be made into an HBO movie by Oprah Winfrey and Alan Ball, this New York Times bestseller takes readers on an extraordinary journey, from the “colored” ward of Johns Hopkins Hospital in the 1950s to stark white laboratories with freezers filled with HeLa cells,

Her name was Henrietta Lacks, but scientists know her as HeLa. She was a poor black tobacco farmer whose cells—taken without her knowledge in 1951—became one of the most important tools in medicine, vital for developing the polio vaccine, cloning, gene mapping, in vitro fertilization, and more. Henrietta’s cells have been bought and sold by the billions, yet she remains virtually unknown, and her family can’t afford health insurance.

Soon to be made into an HBO movie by Oprah Winfrey and Alan Ball, this New York Times bestseller takes readers on an extraordinary journey, from the “colored” ward of Johns Hopkins Hospital in the 1950s to stark white laboratories with freezers filled with HeLa cells, from Henrietta’s small, dying hometown of Clover, Virginia, to East Baltimore today, where her children and grandchildren live and struggle with the legacy of her cells. The Immortal Life of Henrietta Lacks tells a riveting story of the collision between ethics, race, and medicine; of scientific discovery and faith healing; and of a daughter consumed with questions about the mother she never knew. It’s a story inextricably connected to the dark history of experimentation on African Americans, the birth of bioethics, and the legal battles over whether we control the stuff we’re made of.

Rebecca Skloot is an award-winning science writer whose work has appeared in The New York Times Magazine; O, The Oprah Magazine; Discover; and many others. She is coeditor of The Best American Science Writing 2011 and has worked as a correspondent for NPR’s Radiolab and PBS’s Nova ScienceNOW. She was named one of five surprising leaders of 2010 by the Washington Post. Skloot’s debut book, The Immortal Life of Henrietta Lacks, took more than a decade to research and write, and instantly became a New York Times bestseller. It was chosen as a best book of 2010 by more than sixty media outlets, including Entertainment Weekly, People, and the New York Times. It is being translated into more than twenty-five languages, adapted into a young reader edition, and being made into an HBO film produced by Oprah Winfrey and Alan Ball. Skloot is the founder and president of The Henrietta Lacks Foundation. She has a B.S. in biological sciences and an MFA in creative nonfiction. She has taught creative writing and science journalism at the University of Memphis, the University of Pittsburgh, and New York University. She lives in Chicago.

“What Skloot so poignantly portrays is the devastating impact Henrietta’s death and the eventual importance of her cells had on her husband and children. Skloot’s portraits of Deborah, her father and brothers are so vibrant and immediate they recall Adrian Nicole LeBlanc’s Random Family. Writing in plain, clear prose, Skloot avoids melodrama and makes no judgments. Letting people and events speak for themselves, Skloot tells a rich, resonant tale of modern science, the wonders it can perform and how easily it can exploit society’s most vulnerable people.” —Publshers Weekly (starred review)

“One of the most graceful and moving nonfiction books I’ve read in a very long time…‘The Immortal Life of Henrietta Lacks’…floods over you like a narrative dam break, as if someone had managed to distill and purify the more addictive qualities of ‘Erin Brockovich,’ ‘Midnight in the Garden of Good and Evil‘ and ‘The Andromeda Strain.’…it feels like the book Ms. Skloot was born to write. It signals the arrival of a raw but quite real talent.”—Dwight Garner, The New York Times

“Skloot’s vivid account begins with the life of Henrietta Lacks, who comes fully alive on the page…’Immortal Life’ reads like a novel.”—Eric Roston, The Washington Post

“Riveting…raises important questions about medical ethics…It’s an amazing story…Deeply chilling… Whether those uncountable HeLa cells are a miracle or a violation, Skloot tells their fascinating story at last with skill, insight and compassion.” —Colette Bancroft, St. Petersburg Times

1. On page xiii, Rebecca Skloot states, “This is a work of nonfiction. No names have been changed, no characters invented, no events fabricated.” Consider the process Skloot went through to verify dialogue, re-create scenes, and establish facts. Imagine trying to re-create scenes such as when Henrietta discovered her tumor (page 15). What does Skloot say on pages xiii–xiv and in the notes section (page 346) about how she did this?

2. One of Henrietta’s relatives said to Skloot, “If you pretty up how people spoke and change the things they said, that’s dishonest” (page xiii). Throughout, Skloot is true to the dialect in which people spoke to her: The Lackses speak in a heavy Southern accent, and Lengauer and Hsu speak as nonnative English speakers. What impact did the decision to maintain speech authenticity have on the story?

3. As much as this book is about Henrietta Lacks, it is also about Deborah learning of the mother she barely knew, while also finding out the truth about her sister, Elsie. Imagine discovering similar information about one of your family members. How would you react? What questions would you ask?

4. In a review for the New York Times, Dwight Garner writes, “Ms. Skloot is a memorable character herself. She never intrudes on the narrative, but she takes us along with her on her reporting.” How would the story have been different if she had not been a part of it? What do you think would have happened to scenes like the faith healing on page 289? Are there other scenes you can think of where her presence made a difference? Why do you think she decided to include herself in the story?

5. Deborah shares her mother’s medical records with Skloot but is adamant that she not copy everything. On page 284 Deborah says, “Everybody in the world got her cells, only thing we got of our mother is just them records and her Bible.” Discuss the deeper meaning behind this statement. Think not only of her words, but also of the physical reaction she was having to delving into her mother’s and sister’s medical histories. If you were in Deborah’s situation, how would you react to someone wanting to look into your mother’s medical records?

6. This is a story with many layers. Though it’s not told chronologically, it is divided into three sections. Discuss the significance of the titles given to each part: Life, Death, and Immortality. How would the story have been different if it were told chronologically?

7. As a journalist, Skloot is careful to present the encounter between the Lacks family and the world of medicine without taking sides. Since readers bring their own experiences and opinions to the text, some may feel she took the scientists’ side, while others may feel she took the family’s side.What are your feelings about this? Does your opinion fall on one side or the other, or somewhere in the middle, and why?

8. Henrietta signed a consent form that said, “I hereby give consent to the staff of The Johns Hopkins Hospital to perform any operative procedures and under any anaesthetic either local or general that they may deem necessary in the proper surgical care and treatment of: ________” (page 31). Based on this statement, do you believe TeLinde and Gey had the right to obtain a sample from her cervix to use in their research? What information would they have had to give her for Henrietta to have given informed consent? Do you think Henrietta would have given explicit consent to have a tissue sample used in medical research if she had been given all the information? Do you always thoroughly read consent forms before signing them?

9. In 1976, when Mike Rogers’ Rolling Stone article was printed, many viewed it as a story about race (see page 197 for reference). How do you think public interpretation might have been different if the piece had been published at the time of Henrietta’s death in 1951? How is this different from the way her story is being interpreted today? How do you think Henrietta’s experiences with the medical system would have been different had she been a white woman? What about Elsie’s fate?

10. Consider Deborah’s comment on page 276: “Like I’m always telling my brothers, if you gonna go into history, you can’t do it with a hate attitude. You got to remember, times was different.” Is it possible to approach history from an objective point of view? If so, how and why is this important, especially in the context of Henrietta’s story?

11. Deborah says, “But I always have thought it was strange, if our mother cells done so much for medicine, how come her family can’t afford to see no doctors? Don’t make no sense” (page 9). Should the family be financially compensated for the HeLa cells? If so, who do you believe that money should come from? Do you feel the Lackses deserve health insurance even though they can’t afford it? How would you respond if you were in their situation?

12. Dr. McKusick directed Susan Hsu to contact Henrietta’s children for blood samples to further HeLa research; neither McKusick nor Hsu tried to get informed consent for this research. Discuss whether or not you feel this request was ethical. Further, think about John Moore and the patent that had been filed without his consent on his cells called “Mo” (page 201). How do you feel about the Supreme Court of California ruling that states when tissues are removed from your body, with or without your consent, any claim you might have had to owning them vanishes?

14. On page 261, Deborah and Zakariyya visit Lengauer’s lab and see the cells for the first time. How is their interaction with Lengauer different from the previous interactions the family had with representatives of Johns Hopkins? Why do you think it is so different? What does the way Deborah and Zakariyya interact with their mother’s cells tell you about their feelings for her?