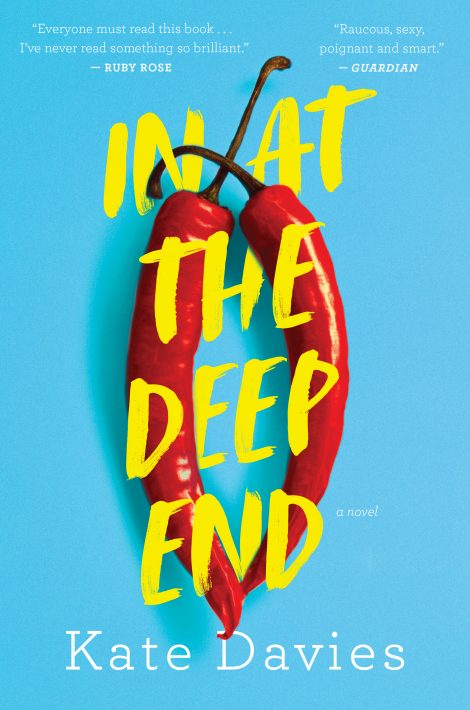 IN AT THE DEEP END

A deliciously disarming debut novel about a twenty-something Londoner who discovers that she may have been looking for love—and pleasure—in all the wrong places (i.e., from men).

So when Julia gets invited to a warehouse party in a part of town where trendy people who have lots of sex go on a Friday night,

A deliciously disarming debut novel about a twenty-something Londoner who discovers that she may have been looking for love—and pleasure—in all the wrong places (i.e., from men).

So when Julia gets invited to a warehouse party in a part of town where trendy people who have lots of sex go on a Friday night, she readily accepts. And that night she meets someone: a figurative artist who also happens to be a woman.

In at the Deep End is an unforgettable and audacious odyssey through the pitfalls and seductions we encounter on the treacherous path to love and self.

Kate Davies was born and brought up in north-west London. She studied English at Oxford University before becoming a writer and editor of children’s books. She also writes comedy scripts, and had a short-lived career as a burlesque dancer that ended when she was booed off stage at a Conservative club, dressed as a bingo ball. Kate lives in east London with her wife. In at the Deep End is her debut novel.

“Everyone must read this book. It’s absolutely hilarious and devastating. I’ve never read something so brilliant.” —Ruby Rose

“[A] raucous and raunchy comedy of (bad) manners.” —O, the Oprah Magazine, “30 of the Best LGBTQ Books That’ll Change the Literary Landscape in 2019”

“This laugh out loud funny British tale follows Julia as she discovers she’s been looking for love and pleasure from the wrong place: men. As she explores her new lesbian life, Julia starts dating Sam. What starts out as liberating soon turns dark.” —Autostraddle, “55 of the Best Queer Books of 2019”

“The beauty of this novel is not the copious amounts of beautiful queer intimacy, though that’s also a validating and important part of it. Rather, the beauty of this novel is how adeptly Davies captures the surreal experience of coming out and being out of one’s depth—and she manages to do it with humility and a good deal of humor, to boot…We need stories like these in the world. We need raw stories of how challenging and fun and beautiful and complicated and obsessive this love can be. We need visibility for abuse within queer relationships. And we need levity, for God’s sake, we do. Thank goodness this novel exists. We can expect great things from Kate Davies.” —Lambda Literary Review

The last time I’d had sex was nothing to write home about either, let me tell you. He was a twenty-one-year-old editorial assistant from Alice’s office with an unusually large forehead, and it happened after a terrible house party that left our flat stinking of pastis. I tried to take him to my room, but a couple were already in there, dry-humping on top of the duvet, so we did it on the fake leather sofa in the living room. I kept getting stuck to the sofa, sweat pooling in the gap beneath my lower back. I don’t think he’d ever fucked anyone before, so it was a bit awkward and thrusty, and he cried and hugged me for too long afterwards. It comes back to me in flashes all the time—I could be boarding a bus, washing my hair, or sitting on a particularly squeaky sofa when suddenly I see his clenched red face or his sweaty pubic hair and flinch involuntarily. Enough to put anyone off sex for, say, three years.

To be honest, I’d always preferred the idea of sex to sex itself. In my imagination, I was experimental, confident, uninhibited, a biter of shoulders, a user of words like “pussy.” I could think about sex in the filthiest terms and speak frankly about it to friends, but when it came to actually doing it, or talking to someone I might do it with, I clammed up. I struggled to think of myself as sexy when I was with another person. I struggled to say sexy things with a straight face. It all felt performative to me, ridiculous, too far removed from the way I behaved in a non-sexy context, like I was playing a part in a porn film, and playing it badly. I couldn’t even flirt convincingly, certainly not when I was sober. Which might go some way towards explaining why it had been so long since I’d fucked anyone.

Alice and Dave, on the other hand, did have sex. A surprising amount of it, actually, considering they’d been going out for five years. The Friday night before that Saturday morning, I was alone in the living room, trying to ignore the sex noises coming from their bedroom. Our flat had incredibly thin walls, so it was almost as if I were there with them. How can something that is so much fun when you’re doing it (though not always — see previous note about sweaty sofa sex) be so repulsive when overheard? I didn’t mind living with a couple; having three people in the flat brought the rent down. Also, Dave had several Ottolenghi cookbooks and some very tasteful mid-century furniture, so we were better fed and more stylish than we would have been without him. But sex-noise-wise, I’d had enough.

The next morning, I heard Alice walk Dave to the door. They whispered to each other revoltingly and kissed wetly. I sat on my bed, picking the dry skin on my fingers, practising my speech in my head.

Alice walked into my room without knocking; people tend to do that when there’s no risk you’ll be shagging. She sat on my bed, her hair rumpled, a post-coital smile on her face. “Do you fancy brunch?” she said. “I’m starving.”

“I’m not surprised,” I said, which wasn’t how I’d intended to broach the subject.

“Why aren’t you surprised? What do you mean?”

“Well, you and Dave sounded like you had fun last night.”

“You listened to us having sex?”

“I didn’t listen. I heard. It wasn’t an active choice.”

“We weren’t that loud,” said Alice, as though asking for reassurance.

I looked away. “You know what you asked him to do.”

“Fine. You asked him to stick a finger up your arse.”

“You’re the one that said it!”

“So keep your voices down!”

There was an unpleasant silence.

“Did you really hear us?”

“You can’t always hear us. We don’t even have sex that often any more—”

“You wouldn’t care so much if you had a boyfriend too.”

“I don’t want a boyfriend, thank you.”