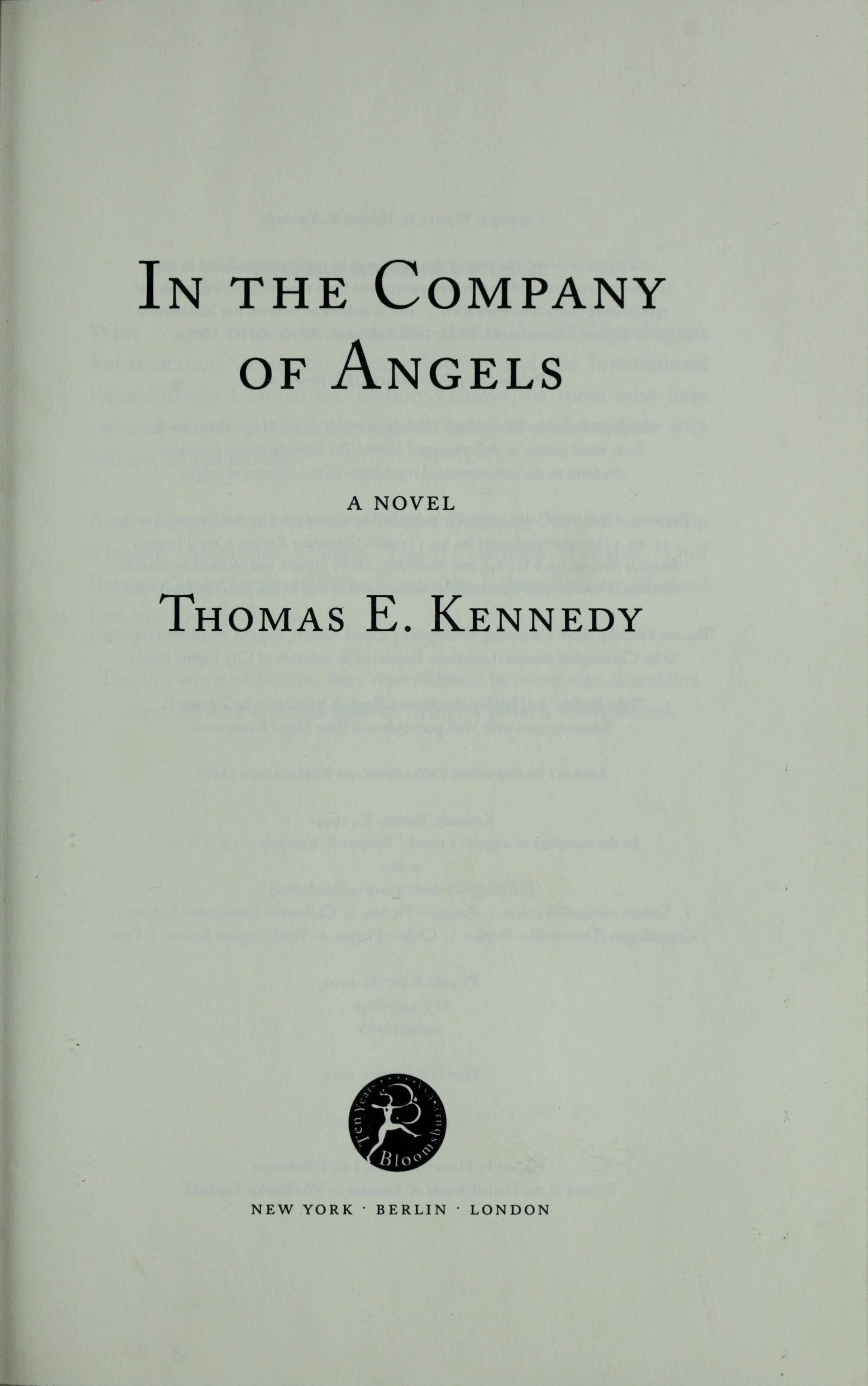 IN THE COMPANY OF ANGELS

In a rehabilitation center for torture victims in Copenhagen, Thorkild Kristensen is trying to take his patient, Bernardo Greene, into the darkest corners of his memory. Nardo is a survivor of months of torture in a Chilean prison, brutally punished for no crime other than sharing political poetry with his students. One vision kept Nardo alive during his imprisonment: he was visited by two angels who promised him that he would see the light of day again. Nardo has seen no angels since that dark day—until he sets eyes upon Michela Ibsen, a Danish woman with radiant blue eyes who frequents the same café as Nardo.

In a rehabilitation center for torture victims in Copenhagen, Thorkild Kristensen is trying to take his patient, Bernardo Greene, into the darkest corners of his memory. Nardo is a survivor of months of torture in a Chilean prison, brutally punished for no crime other than sharing political poetry with his students. One vision kept Nardo alive during his imprisonment: he was visited by two angels who promised him that he would see the light of day again. Nardo has seen no angels since that dark day—until he sets eyes upon Michela Ibsen, a Danish woman with radiant blue eyes who frequents the same café as Nardo.

Michela is pursued by demons of her own. Her elderly parents are ailing, still bickering from separate wings of the state-run nursing home. Her abusive marriage ended a few years ago, soon after her only daughter, just a teenager, committed suicide. Michela is determined never to suffer at the hands of another man—and yet she is romantically involved with Voss, an immature lover turned on by jealousy and intimations of violence. Michela comes to recognize her fear and pain within the eyes of a refugee. Michela is no angel, but as she gets to know Nardo she finds the possibility of healing and love within her heart.

Set amid Copenhagen’s summer lakes and dark bedrooms, In the Company of Angels reveals our human desire to connect, and the possibility to heal, by helping others.

Thomas E. Kennedy has written more than twenty books and won numerous awards, including the Eric Hoffer Award in 2007 for In the Company of Angels (Irish ed.), the Pushcart Prize and the O. Henry Prize for short stories, and the National Magazine Award in 2008.

“In the Company of Angels…is powerful and of the moment…. Kennedy writes clean, evocative prose, and an occasional note of humor leavens this dark novel. He is a writer to be reckoned with, and it’s about time the reckoning got underway in the country of his birth.”—Jonathan Yardley, The Washington Post

“[A] wide-ranging and assured novel….The stories of torture that emerge…offer, in their horror and dignity, a quiet criticism of the characters with more prosaic problems.”
—The New Yorker

“In the Company of Angels is a novel about grown-ups, people battered and dinged by life, painfully aware of their own responsibility, whose understanding of their past never stops evolving. It’s the dignity of their adulthood — the elusive prize at stake in any midlife crisis — that makes them so admirable and, above all, so moving.”
—Laura Miller, Salon

“It probably doesn’t reflect glowingly on American expat Kennedy’s native country that this watershed novel is the first to be published in the U.S. after a decade of acclaim abroad. Why it’s taken so long is anyone’s guess, as there’s plenty to admire in the serpentine unwinding of troubled protagonists adrift in contemporary Copenhagen.”
—Publishers Weekly (starred review)

Thomas E. Kennedy dedicates In the Company of Angels to “those who have endured what I can scarcely begin to imagine; and for those who will not be indifferent.” Does Kennedy succeed in portraying the unimaginable in his novel? Which characters in the novel are heroic for their refusal to “be indifferent” to torture?

The novel opens with Nardo waking from “a dream in which the angels had forsaken him” as he huddles in his bedroom in Copenhagen (3). Why does Nardo believe so ardently in angels? Have the angels “kept their word” (3), as he believes? Or is Nardo still in darkness when the novel opens? What journeys to safety still lie ahead for Nardo when we first meet him?

Thorkild Kristensen, Nardo’s psychiatrist, remarks, “The thought occurred to me that were I to look into Frog-eyes’ face, so to speak, were I to come to know him, the knowledge would sear me like acid” (5). What dangers does Thorkild face in treating Nardo? What consequences does he suffer from his interaction with Nardo, and how must he counsel himself as well as Nardo?

Why is Thorkild the narrator, the first-person “I,” of In the Company of Angels? How would the novel unfold differently if Nardo or Michela were “I” instead of Thorkild?

Discuss the origins of each main character’s name: Nardo, Michela, Voss, and Thorkild. What bonds of inheritance, nationality, and class does each name contain?

Consider Voss and Michela’s experience at Voss’s work banquet, at which Michela dances with another man. How is this a turning point in their relationship? What discoveries does Voss make about sex, jealousy, and romance on that drunken night? How does that evening lead to the eventual end of Voss and Michela’s yearlong affair?

On his deathbed, Mikhail, Michela’s father, holds on to two items: a copy of Hamlet and a trapeze over his hospital bed. What is the significance of each item to him? How is he finally able to let go of these two objects and surrender to death?

Nardo gives Michela a piece of advice: “Do not be ashamed to say you do not know something. For a person to e-say ‘I do not know’ require wisdom” (189). How is this a valuable lesson for Michela? What does she discover she does know by admitting what she doesn’t know? How are Michela and Nardo able to learn from each other?

In a breakthrough therapy session, Nardo remembers his lowest moment in prison. How did his torturers finally succeed in breaking Nardo? How is Thorkild able to bring Nardo into that dark place of memory, and how does he help bring Nardo out of it?

When Nardo first tells Michela about his past life in Chile, “He could tell it no other way than as the story of another man” (166). Why must Nardo distance himself from his own story at first? How is Michela eventually able to help Nardo find peace and connection in the present moment?

When Voss attempts to crash Mikhail’s funeral, Nardo takes Voss aside to “tell him a story, a strange story about a prison, about a moment’s escape into sunlight from a dark, filthy cell in the company of angels who promised him that one day he would be free” (270). How does Voss react to Nardo’s story? What hope does Nardo wish to show Voss? Is Voss likely able to move beyond his cycle of hurting others and himself? Why or why not?

The novel is composed of fifty-three short chapters. How does the chapter division shape the experience of reading In the Company of Angels? Which chapter titles are especially evocative of moments and emotions in the novel?

Is it possible to imagine In the Company of Angels set in a city other than Copenhagen? What seems particularly Danish about this novel, and what elements could be universal enough to take place in a different city?

The novel closes with Lise, Michela’s mother, singing “Grand . . . amour . . . ” from her wheelchair. Why does Lise get the last word of the novel? What love is she recalling from the past, and what love does she witness on this day of her husband’s funeral?