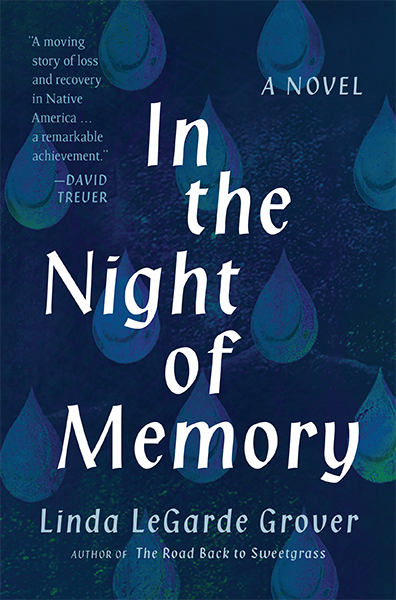 IN THE NIGHT OF MEMORY

When Loretta surrenders her young girls to the county and then disappears, she becomes one more missing Native woman in Indian Country’s long devastating history of loss. But she is also a daughter of the Mozhay Point Reservation in northern Minnesota and the mother of Azure and Rain, ages 3 and 4, and her absence haunts all the lives she has touched—and all the stories they tell in this novel. In the Night of Memory returns to the fictional reservation of Linda LeGarde Grover’s previous award-winning books, introducing readers to a new generation of the Gallette family as Azure and Rain make their way home.

When Loretta surrenders her young girls to the county and then disappears, she becomes one more missing Native woman in Indian Country’s long devastating history of loss. But she is also a daughter of the Mozhay Point Reservation in northern Minnesota and the mother of Azure and Rain, ages 3 and 4, and her absence haunts all the lives she has touched—and all the stories they tell in this novel. In the Night of Memory returns to the fictional reservation of Linda LeGarde Grover’s previous award-winning books, introducing readers to a new generation of the Gallette family as Azure and Rain make their way home.

After a string of foster placements, from cold to kind to cruel, the girls find their way back to their extended Mozhay family, and a new set of challenges, and stories, unfolds. Deftly, Grover conjures a chorus of women’s voices (sensible, sensitive Azure’s first among them) to fill in the sorrows and joys, the loves and the losses that have brought the girls and their people to this moment. Though reconciliation is possible, some ruptures simply cannot be repaired; they can only be lived through, or lived with. In the Night of Memory creates a nuanced, moving, often humorous picture of two Ojibwe girls becoming women in light of this lesson learned in the long, sharply etched shadow of Native American history. 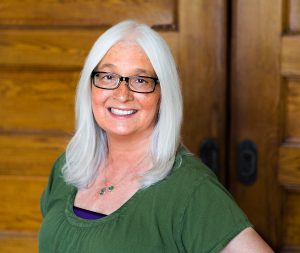 Linda LeGarde Grover is professor of American Indian studies at the University of Minnesota Duluth and a member of the Bois Forte Band of Ojibwe. Her novel The Road Back to Sweetgrass (Minnesota, 2014) received the Wordcraft Circle of Native Writers and Storytellers Fiction Award as well as the Native Writers Circle of the Americas First Book Award. The Dance Boots, a book of stories, received the Flannery O’Connor Award and the Janet Heidinger Kafka Prize, and her poetry collection The Sky Watched: Poems of Ojibwe Lives received the Red Mountain Press Editor’s Award and the 2017 Northeastern Minnesota Book Award for Poetry. Onigamiising: Seasons of an Ojibwe Year (Minnesota, 2017) won the 2018 Minnesota Book Award for Memoir and Creative Nonfiction and the Northeastern Minnesota Book Award.

“Told with vibrancy by an Ojibwe professor and poet, this own voices story of Ojibwe girls in a situation only too common for indigenous families shouldn’t be missed.” —Library Journal

“With gorgeous imagery and verdant prose, LeGarde Grover’s novel lays bare the pain and loss of indigenous women and children while simultaneously offering a ray of hope.” —Publishers Weekly

“With In the Night of Memory, Linda LeGarde Grover offers us a gift of story across generations of Native American women. This book examines what it means to grow up poor, grow up female, and grow up in a place that should be home but feels far from belonging. Grover creates a tapestry of history and imagination, a weaving of perspectives beautiful and wise, a collection of truths that anchors and honors the experiences of Indigenous women.” —Kao Kalia Yang, author of The Song Poet

“In the Night of Memory is a moving story of loss and recovery in Native America. Linda LeGarde Grover has created fully realized characters pushed to the margins of their own lives but who, nevertheless, manage to live on their own terms. Riding on the wave of this poignant novel are some of the most important issues affecting American Indians today, including the loss of family and heritage and the destruction and disappearance of American Indian women. A remarkable achievement.” —David Treuer, author of The Heartbeat of Wounded Knee

“Once again Linda LeGarde Grover skillfully knots together the lives of Anishinaabeg connected to the fictional Mozhay Point Reservation. Like lace, the knotted pattern has gaps, absence, loss, and a design because of what—because of who—is missing. Set across decades and told through generations of relatives, In the Night of Memory mirrors actual history, from government removal of American Indian children to our current crisis of missing and murdered Indigenous women in the United States and Canada. The intimate and interested narrative voices carry the readers, keeping them witnessing and understanding how what happened in the past never stops happening—and continues to impact communities today.” —Heid Erdrich, author of Original Local

“I love this book! What a beautiful story of love and loss—from the pain of intergenerational effects to the trauma of the child welfare system to the hopefulness of community re-engagement. I felt an instant connection with the poetically named Rainfall Dawn and Azure Sky, and their mother Loretta, too. The whole family lived and breathed on the page and filled me right up as if I were there with them. I was sad to finish this one.” —Katherena Vermette, author of The Break

“In the Night of Memory is character driven and lyrical. Its vast, distinct chorus of matrilineal American Indian voices ring in melancholic yet dauntless tones, clarifying that community and nurturing can ameliorate absence.” —Foreword Reviews

1. Azure Gallette bases the memory of her mother Lorraine on one incident from her childhood, which may or not be true or accurate. Do you have a childhood memory that you have found to be embellished by imagination and memory or not true?

2. After surrendering her children to the county, Loretta berates a man she sees on the street for spitting. What might be the significance of her telling him that a little child might walk there? Delving more deeply into this, what might be other reasons for Loretta’s criticism of the man?

3. What events and situations in Loretta’s and her family’s history might have led to her losing her children?

4. A brother, invisible to everyone except Azure, appeared when she moved from a foster home into an institutional children’s home. What might be some reasons for his appearance? Have you or someone you know ever had an imaginary friend?

5. What might be some of the reasons that led people to become foster parents to Azure and Rain?

6. Rainy’s disabilities were not diagnosed until she was an adult; one result of this was that she didn’t graduate from high school. Have you ever known or heard about a student with an undiagnosed learning/social condition?

8. Boyhood friends Junior and Howard both went to Vietnam and remained friends afterwards, yet their lives after they returned differed in many ways. What might be some of the factors in the differences? Have you known someone who was a soldier in Vietnam?

9. Material goods and appearances are not the most important thing in life, yet tangible objects and how things look (Barbie dolls, clothing, household goods, the household itself) play important roles in the story of Rainy and Azure; for example, in their foster placement with Dolly and Junior, their new outfits, accessories, and beauty school hairstyles will affect their relationships with new people they meet. Have you a story or experience that relates to tangibles, appearance, and well-being (or the opposite)?

10. When Junior brings Azure and Rainy to a powwow, they are initially shy and somewhat reluctant. Dolly tells them that they might remember when they get there, that they went to powwows when they were little children. What were some of the thoughts and impressions the girls had when they arrived at the powwow? Have you been to a powwow? Might some of your impressions been like those of the girls?

11. In this story, older women recount much of the history of Azure and Rainy’s extended family and circle of acquaintances; the older women also explain their views on the histories and reasons behind events. There is no clear identification of these women as feminists—but in what ways might that term fit?

12. There is no “happily ever after” in this novel, yet Azure, by middle age, expresses an acceptance and contentment with her life—would this equate to happiness, and how necessary do you feel happiness is to a good life?