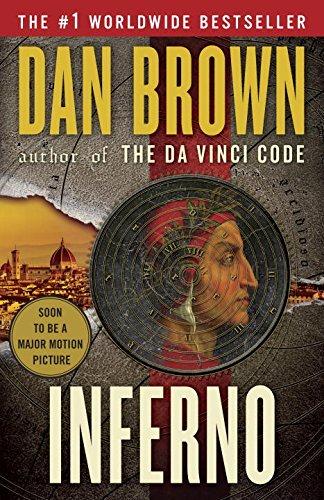 In Inferno, Dan Brown once again offers readers the same heady mix of history, art, symbols, and high-wire tension that catapulted The Da Vinci Code, Angels & Demons, and The Lost Symbol into international blockbusters. This time the stakes are even higher, as Harvard professor of symbology Robert Langdon must decode the mystery surrounding a virus that has the power to alter the course of human civilization—or possibly end it.

As the novel begins, Langdon wakes up from a terrifying nightmare in a hospital in Florence,

In Inferno, Dan Brown once again offers readers the same heady mix of history, art, symbols, and high-wire tension that catapulted The Da Vinci Code, Angels & Demons, and The Lost Symbol into international blockbusters. This time the stakes are even higher, as Harvard professor of symbology Robert Langdon must decode the mystery surrounding a virus that has the power to alter the course of human civilization—or possibly end it.

As the novel begins, Langdon wakes up from a terrifying nightmare in a hospital in Florence, Italy. He doesn’t know how he got there or why he’s even in Florence. He’s told he’s been shot and suffered a slight head wound that has resulted in short-term amnesia. But as he learns more about what has happened to him, amnesia turns out to be the least of his problems.

When a leather-clad assassin storms the hospital, Langdon is forced to flee with the beautiful doctor Sienna Brooks. Running from the assassin as well as the police, Langdon and Brooks are drawn into a devious plot that centers on one of the world’s most mysterious literary masterpieces, Dante’s Inferno.

Langdon find himself up against an imminent global catastrophe. Renowned biochemist Bertrand Zobrist has created a virus that will be released in just twenty-four hours and infect the entire human species. Zobrist is a Dante fanatic and he has used references to Dante’s great poem as clues to the location and purpose of the virus.

Langdon draws upon his own extensive knowledge of Dante’s poem and of Florence’s splendid art and architecture to decipher Zobrist’s riddle. But will he and Sienna be able to find the virus in time?

Zobrist is motivated by the looming threat of unchecked population growth, convinced that the human species will not survive unless there is another mass extinction event on a scale of the Black Plague, which wiped out, in gruesome fashion, one third of Europe’s thirteenth century population. Zobrist sees himself as a savior, despised in his own time, shunned by the scientific establishment, and hunted by Dr. Elizabeth Sinskey of the World Health Organization, but certain that he will be thanked by future generations.

Zobrist is determined and extremely clever. The clues he leaves are maddeningly complex, and Langdon must draw upon all his intelligence, erudition, and ingenuity to decipher them. Unraveling that mystery takes Langdon far beyond Italy into an ominous underworld, where a “chthonic monster” waits to forever change the course of human history.

What makes Inferno so compelling is not only Dan Brown’s masterful ability to spin a spellbinding tale but his skill at weaving a complex and pressing social issue into the fabric of his narrative. The crucial problem of overpopulation, a problem that does indeed pose a threat to human survival, adds a deeper moral and ethical dimension to a book that offers all the page-turning pleasures readers of Dan Brown have come to expect.

Dan Brown is the author of numerous #1 bestselling novels, most recently Inferno. Previously, The Lost Symbol broke the record for the biggest one-week sale in Random House history for a single title. His earlier title, The Da Vinci Code, is one of the bestselling novels of all time. Mr. Brown was named one of the World's 100 Most Influential People by Time Magazine. He has appeared in the pages of Newsweek, Forbes, People, GQ, The New Yorker, and others. His novels are published in over 50 languages around the world.

“Fast, clever, well-informed. . . . Dan Brown is the master of the intellectual cliffhanger.” —The Wall Street Journal

“Brown isn’t just a novelist; he’s a crossover pop culture sensation. . . . Inferno is the kind of satisfying escapist read that summers were made for.” —The Boston Globe

“What Brown does in a way that appeals to millions of people around the world is tell stories that remind us there’s more to the world than meets the eye.” —The Huffington Post

What features does Inferno share with Dan Brown’s other Robert Langdon novels: The Da Vinci Code, Angels & Demons, and The Lost Symbol? In what ways is it different from those earlier works?

Why has Brown used these lines from Dante as an epigraph to Inferno: “The darkest places in hell are reserved for those who maintain their neutrality in times of moral crisis”? How does that statement illuminate the novel? What is the particular danger of maintaining moral neutrality in Inferno?

What accounts for the frenetic narrative pace of the novel? How does Dan Brown use chapter endings to create suspense? What other devices create a narrative tension that pulls the reader along?

What are some of the most surprising twists and turns in Inferno?

What role does the setting play in Inferno? In what ways are Florence, Venice, and Istanbul integral to the plot of the novel?

The brilliant biochemist Bertrand Zobrist asserts some unsettling ideas. He argues that the Black Plague, which killed one-third of Europe’s population, was one of the best things that ever happened to humanity and ushered in the Renaissance. He also believes that the human race won’t survive unless we have another mass extinction event, similar in scale to the Black Plague. In his confrontation with Dr. Sinskey, he rails, “We are on the brink of the end of humanity, and our world leaders are sitting in boardrooms commissioning studies on solar power, recycling, and hybrid automobiles…. Ozone depletion, lack of water, and pollution are not the disease—they are the symptoms. The disease is overpopulation” [p. 139]. Is Zobrist right about these issues? Is his solution the lesser of two evils or is it too morally repugnant even to consider?

How does Langdon use his knowledge of literature, art, and symbology to decipher the clues that lead him to the location of Zobrist’s virus? In what ways is Dante’s great poem, The Inferno, central to the novel?

The Consortium, which allows Bertrand Zobrist to do his work on the virus undetected, has a philosophy of “Provide the service. Ask no questions. Pass no judgment” [p. 75]. Is that a dangerous philosophy, and if so, why? Why does the Provost, by the end of the novel, realize that “For the first time in his life, ignorance no longer felt like the moral high ground”? [p. 444]. How disconcerting is it to learn that the Consortium really does exist, though under a different name, with offices in seven countries?

Sienna Brooks is perhaps the most complex character in the novel. What kind of woman is she? How has her past influenced who she has become? How does she change over the course of the novel? Why does she feel that she has finally found a purpose at the end of the book?

In what ways do issues of trust and betrayal play out in Inferno?

Sienna explains one of the fundamental tenets of Transhumanism: “We as humans have a moral obligation to participate in our evolutionary process . . . to use our technology to advance the species, to create better humans-healthier, stronger, with higher-functioning brains. Everything will soon be possible” [p. 453]. Do an internet search on “Transhumanism” and discuss/debate the motivations and philosophical assumptions of the movement. What does Dan Brown's use of a real-life contemporary movement like Transhumanism add to Inferno? Does Transhumanism offer valid solutions to some of the essential problems that confront the human species?

In an emotional speech to Dr. Sinskey, Sienna says, “Bertrand died all alone because people like yourself refused to open your minds enough even to admit that our catastrophic circumstances might actually require an uncomfortable solution. All Bertrand ever did was speak the truth . . . and for that, he was ostracized” [p. 449]. Does Bertrand go from villain to hero by the end of the book? Do the ends (saving the human species) justify the means (releasing a virus that will dramatically limit population growth) in this case?

Why doesn't Robert Langdon give up on Sienna, even after he realizes what her motives are?

At the end of the novel, Dr. Sinskey invites Sienna to accompany her to a conference where they will address world leaders about the virus Bertrand Zobrist has released and discuss the issue of population control. Is there a significance to having two women, rather than two men, assume this role?