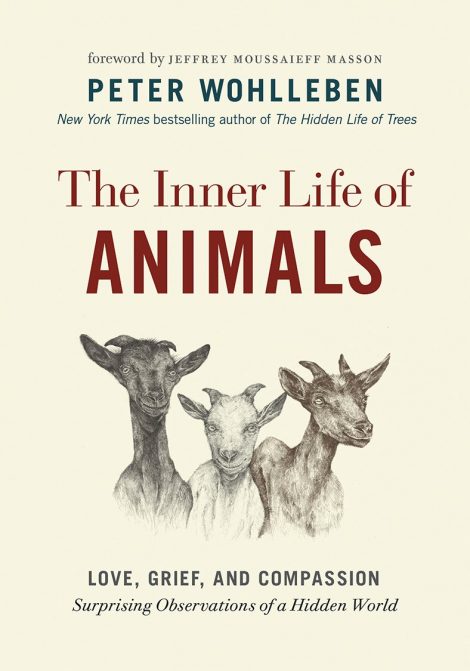 THE INNER LIFE OF ANIMALS

Through vivid stories of devoted pigs, two-timing magpies, and scheming roosters, The Inner Life of Animals weaves the latest scientific research into how animals interact with the world with Peter Wohlleben’s personal experiences in forests and fields.

Horses feel shame, deer grieve, and goats discipline their kids. Ravens call their friends by name, rats regret bad choices, and butterflies choose the very best places for their children to grow up.

In this, his latest book, Peter Wohlleben follows the hugely successful The Hidden Life of Trees with insightful stories into the emotions,

Through vivid stories of devoted pigs, two-timing magpies, and scheming roosters, The Inner Life of Animals weaves the latest scientific research into how animals interact with the world with Peter Wohlleben’s personal experiences in forests and fields.

Horses feel shame, deer grieve, and goats discipline their kids. Ravens call their friends by name, rats regret bad choices, and butterflies choose the very best places for their children to grow up.

In this, his latest book, Peter Wohlleben follows the hugely successful The Hidden Life of Trees with insightful stories into the emotions, feelings, and intelligence of animals around us. Animals are different from us in ways that amaze us—and they are also much closer to us than we ever would have thought.

Peter Wohlleben spent over twenty years working for the forestry commission in Germany before leaving to put his ideas of ecology into practice. He now runs an environmentally-friendly woodland in Germany, where he is working for the return of primeval forests. He also runs a Nature Academy, the Waldakademie Hümmel, where he gives leads guided tours and seminars. He is the author of numerous books about nature, including The Hidden Life of Trees and The Inner Life of Animals.

“From trees to nonhuman animals, Peter Wohlleben challenges us to come to terms with what they are thinking and feeling. In his latest book, we learn a lot about animal intelligence and a wide array of animal emotions in diverse species, stemming from his own extensive personal experiences and some of the latest science. The Inner Life of Animals is an important reminder that while we surely are different from other animals, the similarities in our cognitive, emotional, and moral lives are not only surprising and daunting, but very real. And, we must use this information on their behalf in an increasingly human-dominated world.”—Marc Bekoff, author of The Animals’ Agenda: Freedom, Compassion, and Coexistence in the Human Age

”Peter Wohlleben’s convincing, highly readable stories about free-living and domestic animals show there’s much overlap between how humans and other animals experience bonding, loss, and the great, shared themes of life.” —Carl Safina, author of Beyond Words, What Animals Think and Feel

“With the same charm and clarity that drew so many readers to The Hidden Life of Trees, Peter Wohlleben has produced another gem. I found delight on every page, thanks to the author’s rare skill at blending scientific discoveries with his own wealth of insightful personal experiences.”—Jonathan Balcombe, author of What a Fish Knows

1. Wohlleben’s attachment to animals started early. As a young boy, he hatched a chick in his bedroom, and the bird immediately accepted him as its mother. Did you have a strong bond with an animal as a child? If so, did that early connection affect the way you think about animals now?

2. When asked why Wohlleben chose to take such a personal approach to writing about animals, he said, “Scientific language is very dry and usually completely lacking emotion. And yet our emotions guide most of what we do, and if we distance ourselves from them when we communicate, most people don’t get the message. That’s why I write with feeling.” In what ways is emotion effective in The Inner Life of Animals?

3. What do you think of Wohlleben’s assertion that “instincts are expressed through emotion,” and that therefore animals are as emotional as humans? Does this change the way you see the ethical questions such as factory farming, leather jackets, or even eating meat?

4. Do you believe that an animal has ever tried to communicate with you? Do you think that people can learn to understand some forms of animal communication, as Wohlleben suggests we can?

5. Have you heard the expression: “The more people I meet, the more I love my dog”? In the chapter “Loving People,” Wohlleben questions the nature of the bonds that exist between humans and animals, writing “Some might argue that people simply project their emotions onto animals and see them reflected back.” Do you believe that people can ever truly “love” their pets?

6. Popular books, films, and other media predominantly focus on animals that we perceive as being cute, majestic, or wise— such as puppies, wolves, or elephants. But The Inner Life of Animals features less obviously lovable creatures, like insects and fish. Did you find it more difficult to relate to these animals? Why or why not?

7. Wohlleben explains that the animal kingdom has social hierarchies just like in the human world. Have you ever seen an example of this in your own life? Did the experience make you think differently about that particular animal or species?

8. Animals are used for therapy in hospitals and for companionship in old-age homes. We know that animals can comfort us in times of need. After reading The Inner Life of Animals, do you feel that this bond is more or less reciprocal?

9. What misconceptions did you have about animals before reading this book? How did it feel to have your perspective change?

10. In the final chapter, Wohlleben wonders whether animals have souls, just like humans do. How do you feel? Did reading The Inner Life of Animals change your view on this controversial question?

11. What is the most important lesson that human society can adopt from animals

Your first book, the New York Times bestseller The Hidden Life of Trees, radically transformed the way we think about trees and forests. What do you hope readers learn from The Inner Life of Animals?

First and foremost, I would like readers to enjoy their interactions with animals more. For example, many people watch wild animals, but few stop to consider that the animals are watching them, too. Even I have missed attempts at communication, for example, by crows, as I explain in the book.

What inspired you to turn your attention to animals in this next book?

I’ve been involved with animals for much longer than I have been involved with trees. I got acquainted with trees when I was studying forestry, but as a child I kept spiders in glass jars and terrapins in a big aquarium. A chick even hatched in my bedroom after I incubated an egg using an old electric heating pad belonging to my grandmother. The chick accepted me as its mother right away. I’ve been delving into the lives of animals for as long as I can remember, so it made perfect sense to me to write a book about them.

Much like in The Hidden Life of Trees, The Inner Life of Animals weaves together the latest research with your own experiences interacting with nature. Why do you choose such a personal approach to science in your writing?

Scientific language is very dry and usually completely lacking emotion. And yet our emotions guide most of what we do, and if we distance ourselves from them when we communicate, most people don’t get the message. That’s why I write with feeling, and include lots of personal stories. Readers feel as though they’re coming on a guided tour with me. And that’s exactly what this book is: a guided tour into the animal kingdom on the printed page.

You’ve spent a lot of time working with trees, including more than 20 years in the German forestry commission. Tell me about your personal connection with animals.

Apart from the experiences I had as a child, I’ve been living full-time with animals for the past 25 years. Dogs, horses, goats, rabbits, chickens, and bees are the pets and domestic animals my wife, Miriam, and I both care for every day. We feed them their meals, and they are part of our family.

What’s the most surprising thing you discovered while writing The Inner Life of Animals?

Jane Billinghurst, the wonderful translator of the German edition, drew my attention to an article that described crows bringing gifts to a young girl. That was when I noticed for the very first time that “our” crow, the one we feed daily when we go out to the pasture to feed our horses, was also giving us gifts. Small stones, apples, or sometimes even a dead mouse. Up until then I’d never realized why the crow was leaving these objects at the place where we fed it.

How did writing this book change your own thinking about animals?

Interestingly enough, writing the book didn’t change my thinking at all. I have always believed that animals are more than simply genetically programmed robots. Dog and cat owners have known this for a long time. But even tiny creatures like flies or bees move their legs when they’re sleeping, probably dream, and are aware of what’s going on around them. When you know that, it’s much more fun to watch animals, and you’re more likely to care a bit more about them.

In your book, you offer evidence that animals can experience joy, pain, love, and even gratitude, much like humans do. But for decades scientists have argued the opposite; indeed, some researchers continue to do so today. Why are we so reluctant to accept that animals are capable of human emotion?

It raises questions about the way we treat them. If we accept that animals are not so very different from us, then factory farming is no longer acceptable. It’s often said that animals act instinctively and we think about what we are going to do. And in this context, instincts are deemed to be inferior. But instincts are expressed through emotions, which trigger certain behaviors, in people as well as in animals. Love, grief, empathy, and joy all work at the instinctive rather than the intellectual level, and these emotions are among the most important of our lives. When it comes to emotions, animals operate on the same level as we do. They can’t fly to the moon or build computers, but they can feel joy and love, just as we can.

People have always been curious about the inner lives of animals, and animal emotion has only become more popular recently. Why do you think people are so fascinated by this topic—especially now?

It shows that we have distanced ourselves from nature too much, even though we know that we are still a part of it. The similarities between humans and animals reassure us that we are not alone in this world. While some people are waiting for alien civilizations to be discovered and for the time when we will make contact with other life forms, millions of such creatures are waiting right here and right now. Realizing how similar their emotional lives are to ours and observing them just being who they are is a gift that brings us not only a great deal of joy but also strength to pursue our own lives every day.