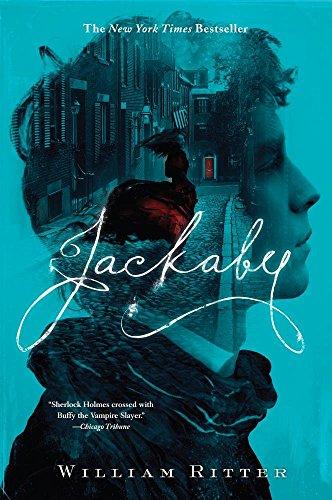 Doctor Who meets Sherlock in the first book of a thrilling series featuring a detective of the supernatural, R.F. Jackaby, and his assistant, Abigail Rook. Now available in paperback. And look for Beastly Bones, the second Jackaby novel, available September 22nd.

Doctor Who meets Sherlock in the first book of a thrilling series featuring a detective of the supernatural, R.F. Jackaby, and his assistant, Abigail Rook. Now available in paperback. And look for Beastly Bones, the second Jackaby novel, available September 22nd.

R. F. Jackaby, an investigator of the unexplained with a keen eye for the extraordinary—including the ability to see supernatural beings. Abigail has a gift for noticing ordinary but important details, which makes her perfect for the position of Jackaby’s assistant.

On her first day, Abigail finds herself in the midst of a thrilling case: A serial killer is on the loose in New Fiddleham. The police are convinced it’s an ordinary villain, but Jackaby is certain the foul deeds are the work of the kind of creature whose very existence the local police—with the exception of a handsome young detective named Charlie Cane—seem adamant to deny.

William Ritter began writing Jackaby in the middle of the night when his son was still an infant. After getting up to care for him, Will would lie awake, his mind creating rich worlds and fantasies—such as the one in New Fiddleham. Will lives and teaches in Springfield, Oregon. Jackaby is his first novel.

“Ritter’s debut skillfully blends science with the supernatural and balances whimsy with violence. The smartly paced plot wraps up neatly, but the rich world of this debut demands sequels.”

“Toss together an alternate 19th-century New England city, a strong tradition of Sherlockian pastiche, and one seriously ugly hat, and this lighthearted and assured debut emerges, all action and quirk.”

“Before you know it, you are immersed in a world obscuring and replacing your everyday reality . . . Mystery, adventure, and fantasy readers will all enjoy this engrossing tale and come away hoping this is not the last they will hear of Abigail and Jackaby.”

“Fans of Jonathan Stroud’s The Screaming Staircase will appreciate Ritter’s initial foray into the realm of supernatural . . . Avid lovers of fantasy will enjoy this quick read.”

The expectations for girls growing up in the 1890s were very different from what they are now. Throughout

the book, Abigail Rook resists many of her era’s rigid gender roles, although she is not comfortable giving up her femininity, either. How are societal expectations for women and men different today? In what ways do you feel comfortable in these roles, and in what ways do you rebel against them?

Abigail Rook’s first impression of Jackaby is that

“he managed to seem both engrossed and entirely uninterested in me all at once” (page 7). Does Jackaby’s attitude toward Abigail change throughout the novel? How?

William Ritter peppered the novel with allusions to folklore, mythology, religion, the supernatural, and detective fiction. For instance, one of the policemen in New Fiddleham is named Allan, after Edgar Allan Poe. Did you catch any of Ritter’s other allusions? Why might the author make these allusions? Does it add anything to the story?

It’s often said that people see what they want to see, and there’s evidence of this throughout Jackaby. Jackaby is convinced the serial killer terrorizing New Fiddleham is a supernatural being, while the police are convinced it’s an ordinary villain, the type they’re used to dealing with. On page 34, Jackaby says, “I am a man of reason and science. I believe what I can see or prove, and what I see is often difficult to grasp.” Do you think Jackaby’s actions and thought processes prove that he would be open to the criminal being human, or did he just happen to be right in this case?

Why do you think that Douglas wants to remain a duck?

On page 112, Jackaby says, “Monsters are easy, Miss Rook. They’re monsters. But a monster in a suit? That’s basically just a wicked man, and a wicked man is a more dangerous thing by far.” Think about what monsters and men do and don’t do in Jackaby, real life, and in other novels. Do you agree with Jackaby’s observation? Why or why not?

Why do you think Jackaby wanted chapter 13 omitted?

On page 223, Hatun predicts that Abigail will die soon. Having faced so many near-death situations in the span of a day, Abigail seems remarkably unfazed. Would your reaction to the omen be similar to hers? If you were in her shoes, would you want to keep working with Jackaby?

Swift seems to have joined the police force in order to sabotage the investigation and keep himself alive. But why do you think Charlie chose to join? Knowing that it’s in his nature to be loyal, what may have caused him to take the oath he mentions on page 278?

Think about the detective stories you’ve read or watched. How is Jackaby similar? What does William Ritter do

in Jackaby that makes the book unique? (Consider tone, structure, characters, or anything else.)

Do you sense any romances brewing between the characters? How might those characters be romantically compatible? What about their personalities and habits might make a romance easier or more difficult?