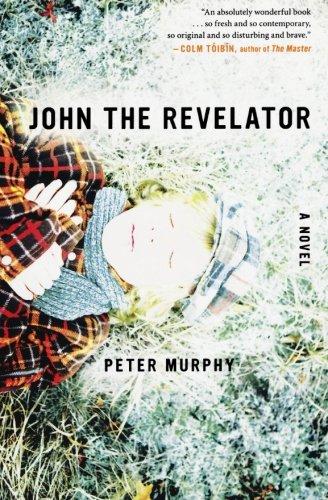 Already fast becoming a classic among coming-of-age tales, John the Revelator has garnered praise from Nick Laird, Colm Tóibín, Roddy Doyle, and John Boyne, and is a critical darling in the U.K.

This is the story of John Devine–stuck in a small town in the otherworldly landscape of southeastern Ireland, worried over by his single, chain-smoking, Bible-quoting mother, Lily, and spied on by the “neighborly” Mrs. Nagle. When Jamey Corboy, a self-styled Rimbaudian boy wonder, arrives in town, John’s life suddenly seems full of possibility. His loneliness dissipates. He is taken up by mischief and discovery,

Already fast becoming a classic among coming-of-age tales, John the Revelator has garnered praise from Nick Laird, Colm Tóibín, Roddy Doyle, and John Boyne, and is a critical darling in the U.K.

This is the story of John Devine–stuck in a small town in the otherworldly landscape of southeastern Ireland, worried over by his single, chain-smoking, Bible-quoting mother, Lily, and spied on by the “neighborly” Mrs. Nagle. When Jamey Corboy, a self-styled Rimbaudian boy wonder, arrives in town, John’s life suddenly seems full of possibility. His loneliness dissipates. He is taken up by mischief and discovery, hiding in the world beyond as Lily’s mysterious illness worsens. But Jamey and John’s nose for trouble may be their undoing, and soon John will be faced with a terrible moral dilemma.

Joining the ranks of the great novels of friendship and betrayal–A Separate Peace, A Prayer for Owen Meany, and Paddy Clarke Ha Ha Ha—John the Revelator grapples with the pull of the world and the hold of those we love.

Peter Murphy, a writer and journalist, has written for Rolling Stone, the Sunday Business Post, and others. He has written liner notes for albums and anthologies, including for the remastered edition of the Anthology of American Folk Music, which features the Blind Willie Johnson recording of the song “John the Revelator.”

“[A] jaw-dropping debut…Murphy works literary alchemy on every page, filtering the daily tedium of small-town life through John’s bizarre worldview and enriching the story with a caustic humor that still leaves room for genuine moments of friendship and familial tenderness…A terrific, disquieting addition to the long tradition of Irish storytelling.”
—Kirkus Review

“Murphy’s writing is resolutely unsentimental, but so moving and powerful that the end had me weeping buckets.”
—Kate Saunders, The Times (London)

“There’s a novel which there’s a lot of excitement about by Peter Murphy called John the Revelator. I’ve read it and it’s an absolutely wonderful book, I mean it’s a really wonderful book. And people say ‘oh, you know, Irish fiction is stale,’ well things can change overnight, and books like Peter Murphy’s can change things and be so fresh and so contemporary, so original and so disturbing and brave. I don’t know what else is coming out of the blue like that, and that’s the way it goes.”
—Colm Toibin, The International Herald Tribune

“John The Revelator is as assured a debut as I’ve read in years, and Murphy has created a cast of characters that will live long in the memory . . . This is a startling first novel, a remarkable statement of intent.”—John Meagher, the Irish Independent

This novel is a wondrous mix of biblical mythology, science, and dark dreams. Did the blurred line between reality and fantasy enhance your reading experience or make it more difficult for you to understand?

What does it tell you about John when, on page 10, he shares a few bits of information about parasites and worms from his new book and then draws the connection between Maggotoriums and the purportedly healing smell that arose from St. John’s grave?

Lily is a religious woman who strives to keep her son on the straight and narrow path. Why does she name him John? Why do you think the author titled the book John the Revelator instead of John Divine or something else entirely?

On page 23, John puts a wasp and a caterpillar in a jar so that the wasp can inject the caterpillar with its eggs. Do you think this makes John a cruel boy? Why or why not? What do you think his fascination with the dark stems from?

Animals have served as symbols and portents throughout human history. In this novel, crows make several appearances. Identify each time a crow appears in the story, and discuss the possible meanings behind this recurring story element?

On pages 30–31, Lily tells John the story of Labhra Loingseach. What is the lesson of this parable, and why does she tell it to John at this point? How does the story relate to the events of the novel?

Throughout the novel, John is exposed to three major figures of womanhood: Molly Ross, the young lover who takes his virginity; Lily, his mother, who raises him alone; and Mrs. Nagle, the strange crone who seems to both help and intrude on the Divines. Discuss the roles that these women play in John’s life and how they are portrayed in the novel?

Having spent most of his life without any real friends or male role models, John takes to Jamey immediately. He later tells his mother that when Jamey left Kilcody for good, he felt that “something inside of me died, like I was a twin whose body had absorbed that of his brother, and now he lived in me” (p. 210). What is it about Jamey that attracts John?

While drunk, John commits horrible blasphemy in the church, which Jamey captures on film. Though Jamey asks him, John is never able to explain exactly why he flipped out the way he did. What do you think happened? Were you surprised that Jamey continued to write to him, even though John let him take the blame? What did you expect to happen when Jamey was released from the boys’ home?

Despite their closeness, John ultimately betrays Jamey. And yet Jamey continues to send postcards and stories to John, even after he leaves town. Discuss the intricacies of this strange friendship, and compare it to other famous literary duos. What other books have you read that place a young friendship at their center? How do these relationships influence the protagonists, compared to how Jamey’s friendship influences John?

Several threads, major and minor, weave through this story, creating an odd pattern of tall tales, literature, dreams, myths, lies, and, somewhere in the midst of it all, a bit of truth. Discuss the various subplots the author has created and follow their paths to their conclusions. Was there anything that you felt was not satisfactorily resolved?

Of all the places to go, why do you think John chooses to retreat to Blowhole Cove after his mother’s funeral? Do you think he finds solace in the end? What did you make of the ending?