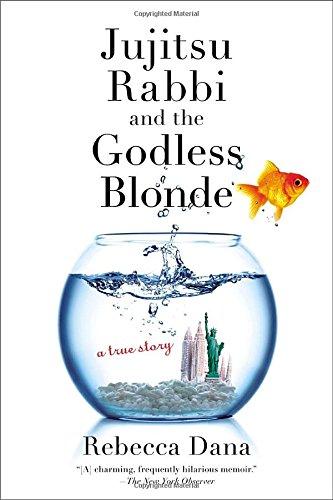 JUJITSU RABBI AND THE GODLESS BLONDE

Rebecca Dana worshipped at the altar of Truman Capote and Nora Ephron, but real life in New York City did not measure up to the literary paradise of her dreams. When her dream life is turned upside-down, she answers a Craigslist ad and trades her West Village apartment for a shared place in Crown Heights. Meanwhile, her new roommate Cosmo—a young Russian rabbi and jujitsu enthusiast—faces his own crisis of faith. Shuttling between religious extremism and secular excess, this is a thought-provoking tale for the twenty-first century.

Rebecca Dana worshipped at the altar of Truman Capote and Nora Ephron, but real life in New York City did not measure up to the literary paradise of her dreams. When her dream life is turned upside-down, she answers a Craigslist ad and trades her West Village apartment for a shared place in Crown Heights. Meanwhile, her new roommate Cosmo—a young Russian rabbi and jujitsu enthusiast—faces his own crisis of faith. Shuttling between religious extremism and secular excess, this is a thought-provoking tale for the twenty-first century.

Rebecca Dana is a former senior correspondent for Newsweek and The Daily Beast. She lives in Manhattan with her husband. This is her first novel.

“For a generation of women who grew up watching Sex and the City, Manhattan is the Promised Land—or as Rebecca Dana puts it in her hilarious, self-deprecating new memoir, it's 'my Jerusalem—the shining city off in the distance, the only place to go'. . . . [An] insightful tale of two fish out of water.” —O Magazine

“Fascinating and engrossing, reading Jujitsu Rabbi and the Godless Blonde is like looking into the windows of compelling people you want to both meet and love. By the end of the book you will do just that.”—Jenny Lawson, #1 New York Times–bestselling author of Let’s Pretend This Never Happened

“Rebecca Dana meets the jujitsu rabbi in the same place fairy tale meets reality, which is the same place all of us meet our lives: nowhere near where we expected. Let me be clear: I’ve never met the author, and I had neither the time nor the inclination to blurb this book, but I started reading her odd, engrossing, tragicomic coming-of-adulthood tale and couldn't stop.”—Deborah Copaken Kogan, author of The Red Book and Shutterbabe

“Rebecca Dana’s story is a lot like New York City—bustling and busy, packed with Jews and jobs, faith and friendship, accident and ambition. With Jujitsu Rabbi and the Godless Blonde, Dana joins the ranks of women who have come to New York, forged identities on their own alongside improbable allies, and lived to tell the tale with wit and grace.”—Rebecca Traister, author of Big Girls Don’t Cry

Rebecca has always dreamed of moving to New York and creating a life like Carrie Bradshaw’s Sex and the City. When she arrives, she immediately feels like she is home. Why is New York so important to her? What is her perception of the city? Is this perception false? Does it change over time?

After first meeting Cosmo and touring the apartment in Crown Heights, Rebecca leaves feeling relieved she’ll never see him again. What changes her mind and makes her want to move in? Do you think she sees this as a temporary escape or as a chance to begin a journey of self-discovery?

Although they come from completely different worlds, Cosmo and Rebecca become unlikely friends who are each at surprisingly similar crossroads in their lives. Compare and contrast their individual crises—Rebecca as newly single, and Cosmo questioning his faith for the first time. How do they each deal with being thrust outside their comfort zone? Do they sympathize with each other? Why is their friendship so important for each of them during this time?

Cosmo’s expressions and behavior—such as eating bacon raw—are comedic, although he isn’t trying to be funny. Why is he a great character for this book? Would you be his roommate?

There is a sharp contrast between the secular world Rebecca lives in Manhattan—parties, celebrities, fashion, drugs—and her new ultra-Orthodox Brooklyn neighborhood. How is she an outsider in both? In which ways does she belong?

Discuss the women Rebecca meets in the Lubavitch community. How are they unlike what she expects? Do you believe they are truly happy? Or are they oppressed, as so many in the secular world believe?

After her week at the Yeshivacation, Rebecca realizes she is searching for a “community of meaning.” What does this come to mean to her? Does she eventually find it? How?

All through her journey, the author is insistent that “We are not in dialogue with the Universe.” She believes the Universe doesn't send signs. Do you think this is true? Was the Universe sending her signs? Do you believe in signs, or have examples of when you felt the Universe sent you a sign?

Has your perception of ultra-Orthodox Jews changed after reading this book? What did you learn about their culture that was unexpected?

Rebecca thinks she has achieved her perfect life in the beginning of the book but after her relationship ends, she realizes she still has a lot of work to do. How can a derailment from the life you thought you wanted end up being a good thing? Discuss a time when something threw you off course from the future you thought you would have, and how it turned out.

How does she eventually make peace with her true self?

Although surrounded by religion, is this really a spiritual journey for Rebecca? Is her faith or relationship with God altered after living with Cosmo and the Lubavitchers?

After returning to Manhattan, has Rebecca changed? What is and isn’t different about her? What are the most important things she’s learned? How does Cosmo’s transformation compare?