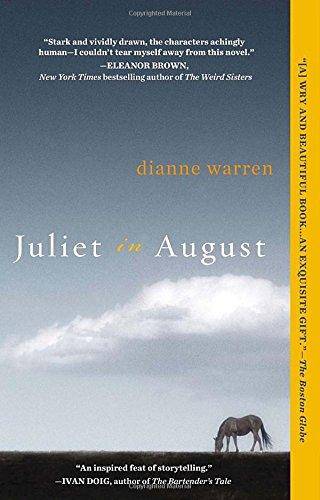 In her luminous debut novel, acclaimed writer Dianne Warren captures the honesty of the human spirit and the quest for companionship…

Juliet is a blink-and-you-miss-it kind of town—a dusty oasis on the edge of a vast stretch of sand. It’s easy to believe nothing of consequence happens here, but the hills vibrate with the rich stories of its people: Lee, a rancher afraid to accept responsibility for the land his adoptive parents left him; Norval, the bank manager forced to foreclose on his neighbors; Willard and Marian, a shy couple beyond middle age, fumbling with the recognition of their feelings for each other;

In her luminous debut novel, acclaimed writer Dianne Warren captures the honesty of the human spirit and the quest for companionship…

Juliet is a blink-and-you-miss-it kind of town—a dusty oasis on the edge of a vast stretch of sand. It’s easy to believe nothing of consequence happens here, but the hills vibrate with the rich stories of its people: Lee, a rancher afraid to accept responsibility for the land his adoptive parents left him; Norval, the bank manager forced to foreclose on his neighbors; Willard and Marian, a shy couple beyond middle age, fumbling with the recognition of their feelings for each other; Vicki, a mother of six struggling to keep her chaotic household afloat. And somewhere, lost in the sand, a camel named Antoinette.

Juliet in August unfolds over the course of just one night and day in the lives of its characters. Their stories intersect and overlap as the entire spectrum of human comedy and heartbreak is refracted through their little struggles and deeper concerns. With wit, thoughtfulness, and unforgettable characters, Juliet in August confirms Dianne Warren as a powerful new talent.

Dianne Warren is the author of short stories and plays. This is her first novel. It won the 2010 Governor General’s Award for fiction, one of Canada’s most prestigious literary prizes (published under the title Cool Water). Warren lives in Regina, Saskatchewan.

“In an inspired feat of storytelling, Dianne Warren links the daily lives of a compelling cast of characters in a prairie community in ways that are as heart-true as they are surprising. Warm, witty, and wisely crafted, Juliet in August is a rich and encompassing novel of unforgettable neighbors who become our own.”—Ivan Doig, author of The Whistling Season

“I was reminded of Carol Shields and the creation of unassuming, matter-of-fact characters who are, in truth, generously complicated. The writing is understated, wry, laconic—as if the place itself could not produce any other kind of story.”—David Bergen

“Juliet in August is an intricately beautiful novel full of the unexpected triumph of ordinary life.”—Siobhan Fallon, author of You Know When the Men Are Gone

“The characters in Juliet in August are as real as the people who live next door, but in these pages Dianne Warren gives us something we can never have with our neighbors—access to their hidden hearts. . . . This is a lovely, life-affirming novel.”—Larry Watson, author of Montana 1948

The novel begins one hundred years ago, with the story of a legendary cowboy horse race. It then jumps to the present and follows several characters who live within proximity of the route of that race. Why do you think the writer included the story of the horse race? What does it add to the novel?

The town of Juliet is situated in the fragile sandy grassland of the Little Snake Hills. During the course of the novel, objects are covered and uncovered by drifting sand. What is the significance of this?

Lee is the adopted son of Astrid and Lester Torgeson. Why did the writer make Lee an adopted child? How does the dynamic created by his adoption shape the nature of his character?

The novel contains many whispers and echoes of the past, including Astrid and Lester’s advice to Lee. What does Astrid mean when she tells him to use the silver tea service, and what does Lester mean when he tells Lee to get himself a good map? Do you recall any comparable instructions that have had an influence on you?

Juliet is a place where all the residents know everything about their neighbors. As is the case in many small towns, gossip is prevalent and its implications affect the social dynamic of the community. How does awareness of this fact influence certain characters? Specifically, two of them are distressed by knowledge that they have: the bank manager and the postmistress. Why is their knowledge a weight they can’t bear?

Although the camel Antoinette makes only a brief appearance, she can’t help standing out in a land where camels are a novelty and live in zoos. Why has the writer included Antoinette in the story?

Vicki Dolson maintains that she is an optimist who rarely experiences the dark moods of her husband, Blaine, yet she has a recurring dream about a small plane crashing, and having to take responsibility for finding the crash site. Why does she have this dream that she doesn’t understand? Does it represent something in particular?

One of the subplots involves the green beans from Vicki’s garden and her procrastination when it comes to putting them up in the freezer. She’s overwhelmed by the garden work, but there seems to be more to it than that. Why is the garden’s bounty such a burden to her? Vicki’s procrastination in this chore has been the cause of an escalating argument with Blaine. Though it’s a trivial matter, does this point of contention indicate something deeper? If so, what? In the end (spoiler alert!), Blaine burns all the beans and defends Vicki when Shiloh calls her useless. Why does he do this? Is it an unexpected turn of events?

The horse that Lee rides through the sand hills is an Arabian, not a breed typically found on farms and ranches in the West. Besides the fact that the Arabian is known as an endurance horse, why may the writer have chosen to have an Arabian wander into Lee’s yard in the middle of the night?

Relationships play a major role in the book: between friends, between parents and children, between neighbors, but often between couples. Some partnerships seem more stable than others; some are surprising in how they end up. In what ways? Consider Willard and Marian. What is special or unique about their relationship? Do you hold out any hope for Karla and Dale, or Rachelle and Kyle? What role does obligation play in any or all of the relationships?

The author examines the archetype of hardy western people in a contemporary time. Do you see her portrayal of their lifestyle as positive? If so, in what ways? Do you think such a lifestyle has been drastically altered in recent times? If so, what evidence do you find in this story? Consider Shiloh, the youngest primary character in the book—how does he resist such a lifestyle? In what ways does he embrace it? Compare his experience with that of Lee, who is older. In what ways are their experiences similar? In what ways are they different?

The novel takes place in one day and night. The author says that she struggled with the time frame of the novel, and that everything fell into place when she realized she could limit the time to one day. So many life-altering events and realizations occur during the course of a twenty-four-hour period. Consider what these are for each of the characters. Does the short time frame intensify what transpires in the story? Or would the issues and events carry the same weight regardless of the amount of time that passes?

In spite of the fact that the novel takes place in one day and night, the author bores down into the real hearts and secrets of the characters to reveal things hidden from the world. What is surprising about Lila’s response to her husband’s death? What side of Lila do we see that she has kept hidden?

The novel contains references to time even before the cowboy horse race: the glacial rock in the pasture and the teepee rings near the campground, for example. Why have they been included, when the novel’s “real time” is limited to one day?

There are many exchanges in the novel—things are given by one character to another, or are exchanged for something else: the gift exchange of a rooster and a used horse trailer between a couple whose marriage is, at least briefly, in jeopardy; the exchange of one watch for another, which is in a box hidden in a closet; the exchange of the Arabian horse for children’s gifts; the secret exchange of an expensive sofa for a bargain one. What do these exchanges add up to? What do they mean?