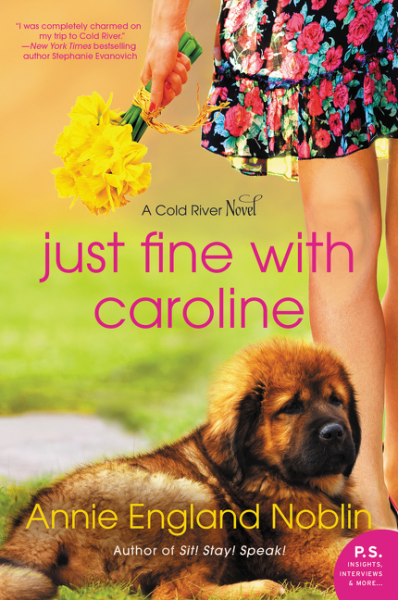 From the author of Sit! Stay! Speak! comes a tender, terrific novel complete with long-buried secrets, a three-legged pot belly pig, and an irresistible dog—an unforgettable story about love, friendship, and community. Perfect for fans of Mary Kay Andrews and Mary Alice Monroe.

Caroline O’Connor never dreamed she’d be back home in Cold River, Missouri, the Ozark Mountain town where everyone is ‘up your business.’…they mean well as they drive you crazy. She thought she’d left town for good, but now she’s back, helping to care for her New York born mother—struck with Alzheimer’s, and prone to saying and doing anything—and her father,

From the author of Sit! Stay! Speak! comes a tender, terrific novel complete with long-buried secrets, a three-legged pot belly pig, and an irresistible dog—an unforgettable story about love, friendship, and community. Perfect for fans of Mary Kay Andrews and Mary Alice Monroe.

Caroline O’Connor never dreamed she’d be back home in Cold River, Missouri, the Ozark Mountain town where everyone is ‘up your business.’…they mean well as they drive you crazy. She thought she’d left town for good, but now she’s back, helping to care for her New York born mother—struck with Alzheimer’s, and prone to saying and doing anything—and her father, the beloved local doctor frustrated he can’t cure his own wife.

As for Caroline, she’s doing “just fine’” coping with her parents, her brazen cousin Ava Dawn’s marital disasters, her mostly-deaf dog…and with Noah Cranwell, far-flung relative of a local family mostly infamous for running moonshine, an ex-veteran who’s come to Cold River with troubles of his own.

Caroline believes she knows everything about Cold River and the people who live in its hills and hollers…but sometimes life’s greatest surprises happen closest to home.

Annie England Noblin lives with her son, husband, and three dogs in the Missouri Ozarks. She graduated with an M.A. in creative writing from Missouri State University and currently teaches English and communications for Arkansas State University in Mountain Home, Arkansas. She spends her free time playing make-believe, feeding stray cats, and working with animal shelters across the country to save homeless dogs.

Found (or, How a Tiny French Bulldog Saved My Life)

I’d been in bed for a month. I got up occasionally to take the dogs out and to grab a Dr Pepper from the refrigerator, but for the most part I stayed under the covers watching reruns of Gilmore Girls and nursing a broken heart.

It was 2007, and I was twenty-five years old. My whole life, it seemed, had been turned completely upside down. I’d moved back home in January to take a job as the part-time writing specialist at Missouri State University–West Plains. The position allowed me to work with students on their writing during the day and teach developmental English classes at night, an arrangement that I loved. The university had given me the job temporarily until I finished my master’s degree. However, when I applied for the full-time job that summer, I wasn’t even given an interview. My boss in academic support called me in to her office, told me they’d hired someone else, and said that I needed to clean out my desk and make myself available to train my replacement.

That was it. I was out of a job, and if I didn’t figure something out soon, I’d also be out of money and a place to live. Instead of looking for a job, I decided to do the next logical thing—buy a plane ticket and fly to Houston to meet one of my high school friends when he was released from jail. We spent three days in a downtown hotel and took a cab to Denny’s for breakfast in the mornings, both of us pretending that our lives that existed outside of each other weren’t complete and total disasters. He went home to his grandmother’s house broke, jobless, and on probation. I went home to Missouri broke, jobless, and in love with him.

He didn’t love me back.

Even now, almost a decade later, that hurts to write. Up until then, in 2007, I’d always thought that he probably loved me too, at least a little bit. When it all came to an ugly end in August, via cell phone screaming matches and heated MySpace messages, I knew for the first time that it was never going to be anything other than a dysfunctional, one-sided obsession.

Cue the rolls of raw cookie dough and season after season of Rory and Lorelei Gilmore’s witty banter. The dogs, at least, seemed content to be resting on the bed with me, snoring and farting their way through the days. Well, except for one of them. Tru, my little French bulldog, spent most of his time hiding under the bed. He would come out only if I left the room or was sleeping or pretended not to notice him.

I’d adopted him from an animal control department not far from where I lived after an afternoon of playing around on Petfinder. I noticed a listing for a French bulldog. I called my mom.

“You don’t need another dog,” she said.

“I just want to check it out,” I replied.

By the time we got there, the animal control officer was about to lock up for the day. He led us back to a shed behind the police station. Inside were two wire pens. Each pen held a dog, although it was so dark inside that I couldn’t see anything. One of the dogs inside the pen was barking, high-pitched and panicked. I went inside that pen and scooped up the dog inside.

“Oh, you don’t want to do that,” the animal control officer said. “He’s pretty dirty. He’s been in here for a while.”

“You haven’t even seen him.”

I didn’t get a good look at him until after we’d filled out the paperwork and were back in the car headed home.

He was shaking. And panting. The moment we got home and his feet touched the carpet, he ran to my bedroom and hid under the bed. Nothing and no one could make him come out. My two other dogs, a Boston terrier named Lola and bulldog mix named Louis, didn’t quite know what to make of this new dog.

Truthfully, neither did I. He’d been an impulse rescue. I’d scooped him up, paid the ten-dollar adoption fee, and taken him home. He was in pretty pitiful shape. His coat was dull and patchy. There were several long scars running the length of his back legs. His eyes were cloudy, his ears were tattered, and his belly was full of sores. The vet said most of his teeth were rotten and that he wasn’t healthy enough to be neutered. The vet sent me home with antibiotics, medicated shampoo, and eye drops, and told me to wait it out. The dog might live if the infections cleared up and he started to eat.

Little by little, Tru got better, and the story of what his life must have been like before he came to live with me became more and more clear. His eyes were milky from ulcers that had never been treated, the sores on his belly were from staph infection, he had ear mites and fleas and ticks, and the scars on his legs, the vet said, were probably from being tied up and chewed on by other dogs.

He jerked away and barked violently when anyone tried to touch him during those rare occasions that he came out from under the bed. My other two dogs hadn’t come to me this way. I’d read about abused dogs, but until now, I’d never had one. It didn’t take long for me to figure out that Tru had probably been abused for a very long time before he was picked up by animal control. His wounds went much deeper than the physical, and although his body got stronger and stronger every day, his spirit remained broken.

By the end of the summer I’d managed to find a job teaching high school English, and I came home every day exhausted, ready to fall back into my routine of watching television in my room in my underwear. Sometimes I’d come home to find Tru at the water bowl, but most days he’d scurry back to his hiding spot before I saw him. I didn’t blame him. I wanted to do the same thing.

One day I was cleaning my room when I leaned down and saw Tru staring back at me from underneath the bed. I lay down and slid under the bed next to him. He let out a yelp and armycrawled to the other end, where he watched me from a distance. I opened my mouth to tell him that it was okay, that I wasn’t going to hurt him, but instead what came out was a sob. I was just so lost. I felt like I was suffocating. Everything was wrong, just so damn wrong. I couldn’t believe that I had finished an M.A. in creative writing only to come back to my hometown and teach high school. I couldn’t believe that I’d let some stupid guy destroy my self-esteem, couldn’t believe how much it hurt every single day just to breathe and get through it.

I was lying there, face-first on top of dust bunnies and dog hair and God knows what else, wondering if it really and truly might be better just to die, when I felt something wet and rough slide across my cheek. When I looked up, Tru was right in front of me. He cocked his head to the side, his tongue hanging ever so slightly out of his mouth. We stayed that way for a long time until I collected myself enough to resume cleaning.

Neither one of us was magically healed after that moment. Tru stayed under the bed most days, and I still felt like my world was all wrong for a long time. But I think it’s like many of those of us working in rescue say—the animals rescue us more often than we rescue them. My dog comforted me when I was feeling my lowest in the only way he knew how. He reminded me that even when you’re sobbing in the middle of the afternoon in your underwear after crawling underneath your bed and you’re feeling your absolute worst, there’s a reason to keep going.

Almost a decade later, Tru’s face is completely gray, and he’s missing most of his teeth. He still has those scars on his back legs, but he doesn’t run away when I or anyone else bends down to pet him. He sleeps on top of the bed instead of underneath it, and if you’re not careful, he’ll lick your face before you’ve even had a chance to say hello.

I think about him every time I get a phone call or an e-mail from someone about an abused dog—a dog that is considered unadoptable, unlovable, too sick or too old to be of any use.

I think about how I found him in the dark in that dirty pen and about how the animal control officer said I didn’t want him. I wonder what might have happened to the both of us if I’d listened to him. More than anything, I think about that brokenness—Tru’s and mine—the brokenness that we shared that summer and still carry around inside of us when things get tough, and I tell every single unlovable, unadoptable dog I meet that there is always a reason to keep going.