THE KINSHIP OF SECRETS

From the author of The Calligrapher’s Daughter comes the riveting story of two sisters, one raised in the United States, the other in South Korea, and the family that bound them together even as the Korean War kept them apart.

In 1948 Najin and Calvin Cho, with their young daughter Miran, travel from South Korea to the United States in search of new opportunities. Wary of the challenges they know will face them, Najin and Calvin make the difficult decision to leave their infant daughter, Inja, behind with their extended family; soon, they hope, they will return to her.

From the author of The Calligrapher’s Daughter comes the riveting story of two sisters, one raised in the United States, the other in South Korea, and the family that bound them together even as the Korean War kept them apart.

In 1948 Najin and Calvin Cho, with their young daughter Miran, travel from South Korea to the United States in search of new opportunities. Wary of the challenges they know will face them, Najin and Calvin make the difficult decision to leave their infant daughter, Inja, behind with their extended family; soon, they hope, they will return to her.

But then war breaks out in Korea, and there is no end in sight to the separation. Miran grows up in prosperous American suburbia, under the shadow of the daughter left behind, as Inja grapples in her war-torn land with ties to a family she doesn’t remember. Najin and Calvin desperately seek a reunion with Inja, but are the bonds of love strong enough to reconnect their family over distance, time, and war? And as deep family secrets are revealed, will everything they long for be upended?

Told through the alternating perspectives of the distanced sisters, and inspired by a true story, The Kinship of Secrets explores the cruelty of war, the power of hope, and what it means to be a sister. 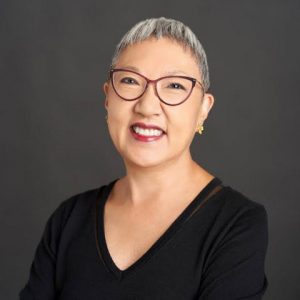 but novel, The Calligrapher’s Daughter, won the 2009 Borders Original Voices Award, was shortlisted for the Dayton Literary Peace Prize, and was a critics’ pick by The Washington Post. Her stories have appeared in Asia Literary Review, Washington City Paper, Raven Chronicles, and elsewhere. Kim teaches in Fairfield University’s MFA Creative Writing Program and lives in Washington, DC.

“A graceful, poignant, and moving portrayal of one family’s struggle to remain a family through decades of war, migration, and separation.” —Viet Thanh Nguyen, Pulitzer Prize-winning author of The Sympathizer

“Beautifully illuminate[s] Korea’s past in ways that inform our present….Kim infuses a coming-of-age story about being an outsider with the realities of the war, which forced many family separations, some of which still persist today.” —Washington Post

“Eugenia Kim’s stunning novel, based in part on her family history, follows Miran and Inja as they grow up in two very different countries.” —Real Simple

“Insightful . . . Poignant and richly evocative of both Korea and the immigrant experience.”—Sunday Times (London)

On a chilly summer night, a newsmonger trudged uphill to a residential enclave of Seoul, the last neighborhood on his route.

By the dim light of his lantern swinging atop a bamboo pole, he checked his watch, clacked his wooden clappers three times, and, with the crystalline tones of his nighttime newscast, sang, “Attention, please, attention. Tuesday, twenty-seven June, three-thirty a.m. The North Korean People’s Army retreats after our heroic counteroffensive in Uijongbu. Enemy tanks were destroyed, and our forces have mobilized to repulse the enemy all the way to the Yalu River. President Rhee urges the people of Korea to trust our military without being unsettled in the least, to carry on with their daily work and support military operations. Attention, please, attention.”

His call echoed against the bulky profile of a Western-style house, where Inja, nearly four years old, lived with her maternal uncle, aunt, grandparents, as well as a cook and her teenaged daughter. Though it was the hour of dreams, Inja slept hard and still, her steady breaths matching those of her grandmother snuggled in the bedding beside her. The day before, Inja had accompanied Uncle downtown to read posted news bulletins, and his strained and rapid stride elevated her fear of things she didn’t understand—communists, invasion—and had exhausted her.

Inja’s dreams, both waking and sleeping, were often fanciful visions of her parents and her year-older sister in America. Having been left behind in Korea when she was a baby, Inja had no concrete memory of her family. They appeared to her as shadow people, their smiles as still as the few photographs they sent. To animate their grainy black-and-white features into an idea of mother, father, and sister, her imagination blurred them into amorphous shapes ?— ?loving, said Uncle, and generous, as proven by the monthly packages they sent—ghost people to whom she was bound.

Yesterday, Uncle and Aunt argued fiercely about the merits or foolhardiness of leaving their home and fleeing south. Inja had thought the mystifying and controversial invasion could be an exciting change of routine, and though she had no say in the decision to stay or go, she longed for adventure. Already her shadow sister had journeyed halfway across the world, while she herself had gone nowhere.

A dry wind carried the newsmonger’s song into their yard on his return trip down the hill, and Inja woke. She heard a pop of electricity—Uncle turning on the lightbulb dangling from the ceiling in his sitting room. Its blue glare streamed down the hallway, and his feet padded out to the porch. Her uncle was a calligrapher who created newspaper mastheads and banner headlines, so he had many contacts in the news business. Whirring crickets muffled Uncle’s queries to the man on the street. Inja opened her eyes wide as if it would help her to hear better. No strand of morning light yet touched the shutters. She slid out of the bedding, careful to not disturb Grandmother, crept into the long side room that was the hub of the house, and peeked out the front door.

In the darkness, Uncle ran straight into her. “Umph! Yah, why are you up? Are you okay? Let’s see that nose.”

Startled tears sprang from her eyes, but she smiled and rubbed her nose to say she was unhurt. “What did the man say? Are we going on a trip?”

“Heedless ears make heedless thoughts,” said Uncle. He crouched to meet her eyes in the shadows cast by the bedroom light.

She stepped into his open arms and his ready hug. With such protection, invasion couldn’t possibly harm her. “Will we all go together?”

“I’ll talk it over with Harabeoji.” Since Uncle didn’t say no and discussions with Grandfather usually meant he’d made up his mind, she was certain they would go. A sliver of glee shivered down her back, and she hopped out of his hug. “I can pack all by myself. I can help with Halmeoni.” Inja could keep her tiny Grandmother’s cane ready when she wanted to stand, or fetch her Bible, a clean pair of socks ?— ?whatever she needed.

“Don’t disturb her. You go back to sleep, and I’ll wake you if we decide to go. And if we do, it’s only for a short while.”

“Okay.” She returned to her room. Uncle was lax with discipline, but Inja had grown dutiful under the rough watch of her strict aunt and a stern command or two from her grandparents. Back in bed, with the pulse of Grandmother’s breath in her ear, she lay wide awake and listened to unintelligible talk between the men, and soon a rising volume of complaints from Aunt. With such fights frequent in their house, Inja had learned to muffle the bitter tones and ugly words by diverting her attention to making lists, sometimes of what came in the last package from America, what clothes had been distributed, what candy had been devoured, what new words she’d learned from reading newspapers with Uncle, or the quirky things Yun ?— ?her nanny, who was Cook’s thirteen-year-old daughter—did that made her laugh. She created an imaginary list of what she would pack.

Bible picture book from Mother, my favorite of everything

She ran her hand over the pressed linen surface of her Bible storybook, always nearby, and fingered its borders tooled with gold swashes. As high and wide as her chest and as thick as three fingers, it required both arms to carry it. If she took the book, little else would fit into a small bundle for their journey, so she sat against the wall and thought about all the things from the American packages she’d have to leave behind, all gifts from her mother and father and sister. These items lay on a corner shelf nearby, and as the room grayed with dawn, their silhouettes made it easier for her to inventory.

Small doll with yellow hair and moving arms and legs

American flag on a chopstick-sized stick

A miniature spoon with words etched in its bowl

Shiny wrappers from candy and gum

A brooch made of pompoms, shaped like a poodle (a strange American dog)

Coloring book, all done, and six crayons (Yun was better at staying inside the lines)

Cross-legged on the floor, she opened the Bible book to feel the glossy leaves of its illustrations. It was too dark to see, but she’d studied them for so many hours, she could guess what image was beneath her fingers by the bulk of pages in each hand. They were vivid and unforgettable, and from memorizing what her uncle said about the captions, she had learned what Fear looked like, and Greed, Sin, Pride, and Envy. It did not have a picture of Communist Invasion, but she thought their forthcoming journey might mirror how the Chosen People had crossed the sea floor while God held the raging waters back.

Inja leaned against the wall and fell asleep to sounds of activity in the kitchen and in an outside shed, where an oxcart had been stored since the war with Japan before she was born.