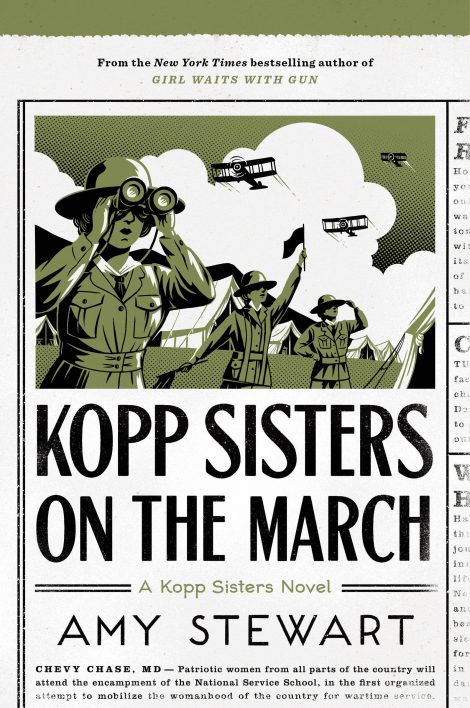 KOPP SISTERS ON THE MARCH

In the fifth installment of Amy Stewart’s clever and original Kopp Sisters series, the sisters learn some military discipline—whether they’re ready or not—as the U.S. prepares to enter World War I.

It’s the spring of 1917 and change is in the air. American women have done something remarkable: they’ve banded together to create military-style training camps for women who want to serve. These so-called National Service Schools prove irresistible to the Kopp sisters, who leave their farm in New Jersey to join up.

When an accident befalls the matron, Constance reluctantly agrees to oversee the camp—much to the alarm of the Kopps’ tent-mate,

In the fifth installment of Amy Stewart’s clever and original Kopp Sisters series, the sisters learn some military discipline—whether they’re ready or not—as the U.S. prepares to enter World War I.

It’s the spring of 1917 and change is in the air. American women have done something remarkable: they’ve banded together to create military-style training camps for women who want to serve. These so-called National Service Schools prove irresistible to the Kopp sisters, who leave their farm in New Jersey to join up.

When an accident befalls the matron, Constance reluctantly agrees to oversee the camp—much to the alarm of the Kopps’ tent-mate, the real-life Beulah Binford, who is seeking refuge from her own scandalous past under the cover of a false identity. Will she be denied a second chance? And after notoriety, can a woman’s life ever be her own again?

In Kopp Sisters on the March, the women of Camp Chevy Chase face down the skepticism of the War Department, the double standards of a scornful public, and the very real perils of war. Once again, Amy Stewart has brilliantly brought a little-known moment in history to light with her fearless and funny Kopp sisters novels.

Amy Stewart is the New York Times best-selling author of the acclaimed Kopp Sisters series, which began with Girl Waits with Gun. Her six nonfiction books include The Drunken Botanist and Wicked Plants. She and her husband own a bookstore called Eureka Books. She lives in Portland, Oregon.

All four previous books in the Kopp Sisters series have been Indie Next Picks.

“Told in Stewart’s nimble, witty prose, this fifth in the popular series is based largely on fact and offers a paean to patriotism and the role women have played in war, even a century ago. Devoted fans will be pleased with the tantalizing hint Stewart provides about what lies ahead for Constance.” —Booklist, starred review

1. Constance is still having trouble adjusting to her more domestic life. She even looks for her whistle to direct traffic on their way into camp on page 15. Norma notices and says, “Go ahead and order them out of the way. You like to be in charge.” How did it feel seeing Constance’s listlessness here compared to the previous books?

2. On page 28 Constance describes the scene at the school: “The place had the air of a summer party, in spite of the early March chill, and seemed far removed from the fighting in France or, for that matter, the very idea of war.” The disconnection between the camp and the war is brought up many times throughout the book. Why does it seem so far removed? Does that change during the course of the story?

3. “There are times when I find the law to be more of a hindrance.” (293) Usually Constance is teaching others, but what does Nurse Cartwright teach Constance?

4. What do you think about Norma’s point: “If the only woman in Congress votes for war, every mother in this country will give up her son a little more easily”? How can a woman’s public decision be helpful or hurtful differently than a man’s?

5. “It’s my camp. We’re going to train for war.” (323) This change in Constance’s behavior is where we see the character most like the Constance we have seen in previous books. What sparked this change the most? Where does her confidence come from?

6. On page 337 Maude Miner says, “I’ve never been prouder of this country’s daughters than I am right now.” Why was it so important for her to see the women’s training in person even if at first she thought it was a detriment to their cause? What did it show her personally and what does she hope it will show men?

7. A time when family are scattered and not a text or Facebook message away, how does that impact the choices the family members who are “left behind” make?

8. The epilogue is set six months later and only focuses on Beulah and Nurse Cartwright. What did you think about this ending?

Beulah knew it was over when she returned from lunch to find her desk cleared and a little box placed on the seat of her chair, like a gift.

PINKMAN HOSIERY, read the foil stamping. THREE DOZEN ASSORTED. It was the very style of box that Beulah had been hired to paste together when she started at the factory six months earlier, before she was promoted to office girl. She didn’t have to look inside to know that it held the contents of her desk drawer: her comb, her lip-stick, her extra handkerchiefs, and a subway token, along with the silk sheers that Mr. Pinkman bestowed upon every girl he fired as a final, guilty, lily-livered parting gift.

Beulah lifted the box slowly, as if in a dream, and looked around at the rows of desks surrounding hers. Mr. Pinkman employed a dozen office girls in a high-ceilinged but nevertheless cramped room, so that they were obliged to push their desks together and work elbow to elbow. There were no secrets among the typists and billing clerks.

Every eye in the room darted briefly up to Beulah and away again. Typewriters clattered, order forms shuffled, and chairs squeaked and groaned as the girls went about their business. Beulah knew that the dignified course of action was to clutch her little box to her chest and to skitter away quietly, blinking back a few repentant tears as she went out the door for the last time.

That’s how she used to do it, back when she first arrived in New York. She thought it was a requirement of the job to behave politely as she was being put out on the street. But then it occurred to her that once she’d been dismissed, she was free to do as she pleased.

What pleased her at that moment was to have a word with Mr. Theodore Pinkman, who was peeking out at her from behind the blinds in his office, like the petty and spineless man that he was. He loved to hide away in that wallpapered den of his, and pretend not to watch the girls in the next room.

He drew away when she caught him staring at her. Of course he did. He could never own up to anything. He was already fumbling to lock the door as she marched over, but he couldn’t manage it. For a man who manufactured ladies’ undergarments, he was utterly inept with handles, knobs, buttons, clasps, and other small fittings. Beulah had found it endearing at first, but lately she’d come to believe that there was something deficient in a man who couldn’t properly undress a woman—or fire one.

She gave the still-rattling doorknob a hard turn and shouldered her way in. Mr. Pinkman fell back against his desk, all two hundred and fifty pounds of him, blushing, sweating, his curly hair resisting his daily efforts to slick it down, those blue eyes, round as a child’s, registering a look of perpetual surprise.

He stumbled to his feet and tugged at his vest. “Ah—hello. I—”

“A little box on my chair, Teddy? Like I’m any other girl? I fixed your dinner last night. I made those damn little French potatoes that take an hour to peel because you won’t eat the skins. I ironed your collar ?— ?the one you’re wearing right now! And you send me away with a box of stockings?”

She tossed it down and it fell open. The contents were exactly as she’d expected, except for a folded bill on top. To her parting gift he’d added ten dollars.

Did Mr. Pinkman honestly think that would satisfy her?

He trailed off, finding himself unable to make the simplest of explanations for a circumstance that was as old as marriage itself.

“Mrs. Pinkman need never have found out, if you knew one thing about keeping a secret, which you don’t,” Beulah said. “What’d you do, leave a coat-check tag in your pocket? Come home with perfume on your handkerchief?”

He didn’t answer. He didn’t have to. It was always one or the other, the ticket or the handkerchief.

Beulah crossed her arms and paced around his office in a circle, as if she owned it, which she did, in that moment. “Well. What are we going to do now? You’ve dismissed me, because she insisted on it, and she’ll know if I’m still working here. She’ll come around and check. But she doesn’t know about our flat, does she? And you signed a lease through December.