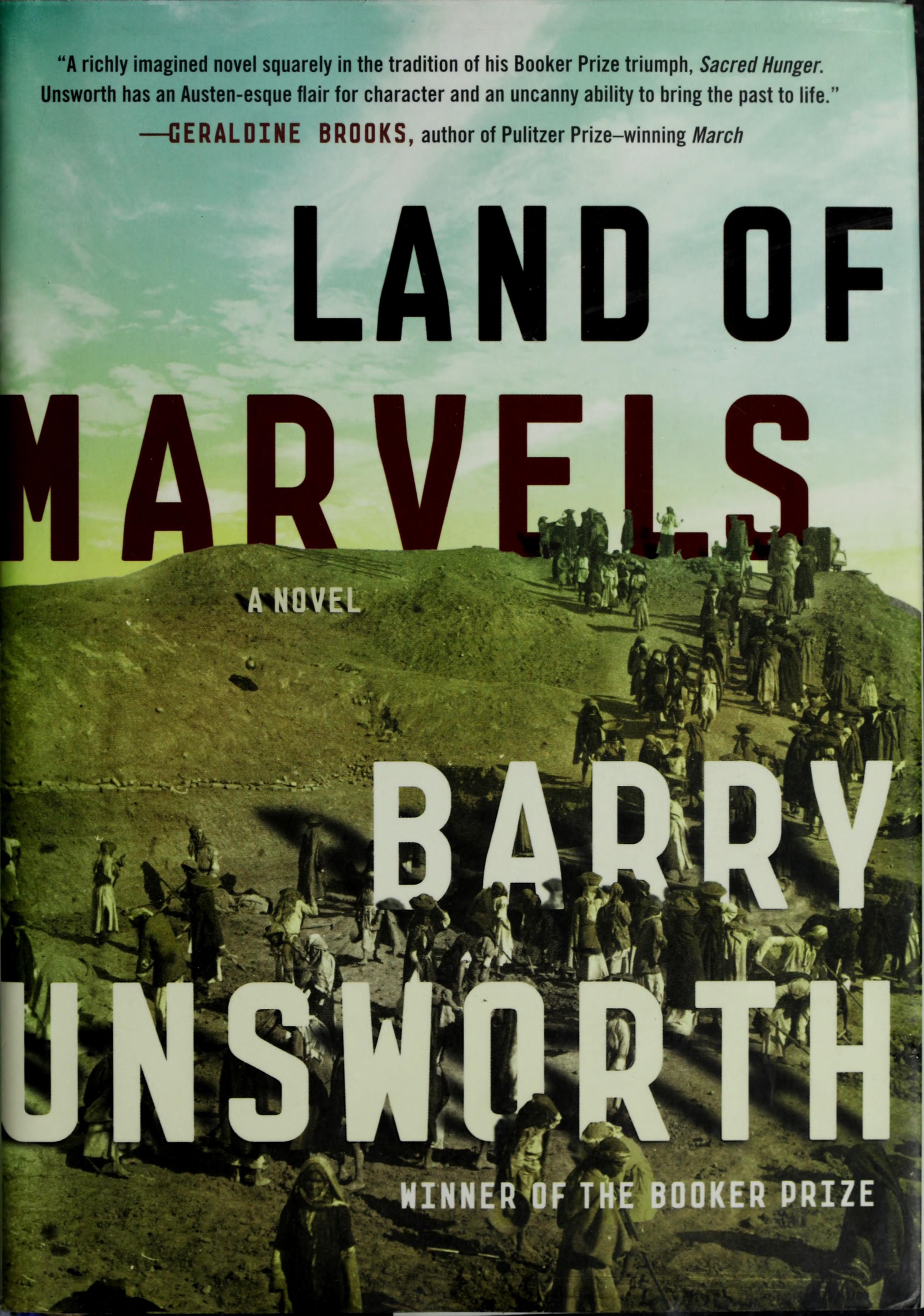 Barry Unsworth, a writer with an “”almost magical capacity for literary time travel”” (New York Times Book Review) has the extraordinary ability to re-create the past and make it relevant to contemporary readers. In Land of Marvels, a thriller set in 1914, he brings to life the schemes and double-dealings of Western nations grappling for a foothold in Mesopotamia (now Iraq) in the dying days of the Ottoman Empire.

Somerville, a British archaeologist, is excavating a long-buried Assyrian palace. The site lies directly in the path of a new railroad to Baghdad, and he watches nervously as the construction progresses,

Barry Unsworth, a writer with an “”almost magical capacity for literary time travel”” (New York Times Book Review) has the extraordinary ability to re-create the past and make it relevant to contemporary readers. In Land of Marvels, a thriller set in 1914, he brings to life the schemes and double-dealings of Western nations grappling for a foothold in Mesopotamia (now Iraq) in the dying days of the Ottoman Empire.

Somerville, a British archaeologist, is excavating a long-buried Assyrian palace. The site lies directly in the path of a new railroad to Baghdad, and he watches nervously as the construction progresses, threatening to destroy his discovery. The expedition party includes Somerville’s beautiful, bored wife, Edith; Patricia, a smart young graduate student; and Jehar, an Arab man-of-all-duties whose subservient manner belies his intelligence and ambitions. Posing as an archaeologist, an American geologist from an oil company arrives one day and insinuates himself into the group. But he’s not the only one working undercover to stake a claim on Iraq’s rich oil fields.

Barry Unsworth won the Booker Prize for Sacred Hunger; his next novel, Morality Play, was a Booker nominee and a bestseller in both the United States and Great Britain. His other novels include The Ruby in Her Navel, The Songs of the Kings, Losing Nelson, After Hannibal, The Hide, and Pascali’s Island, which was also shortlisted for the Booker Prize and was made into a feature film. He lives in Italy.

“With measured prose that builds steadily in suspense, Unsworth does an excellent job at simultaneously evoking a past era and foreshadowing American involvement in the modern Middle East.” —Booklist

“In elegantly modulated prose, Unsworth creates a tapestry of ambition and greed while, at the same time, foreshadowing the current conflict in the region.” —Publishers Weekly

“[Unsworth’s] work is as clean as Hemingway’s and as dark as Conrad’s, and it’s braced with a loathing of exploitative power…but the real triumph is the book’s commentary on modern Iraq. ” —Men’s Journal

Land of Marvels centers on some central themes, such as fidelity, justice, power, honesty, and accountability. How does Land of Marvels depict these themes? Is it optimistic?

Is Land of Marvels making the argument that human beings, no matter their station, gender, ethnicity, etc, are all driven by a compulsive urge to satisfy their own self-interest? How are the main characters driven in this way and do any find salvation?

Do any of the competing interests in the story, especially those at Tel Erdek, take precedence for you? Is one more important than another? Considering the collision of archeology, rail, and oil – do any have a legitimate claim to the land?

Can you explain the inherent contradiction in Somerville’s attitude toward history? Why does he obsess over Tel Erdek, while simultaneously kicking pieces of pottery around like stones? For Somerville, what makes a rare artifact more important than broken pieces of pottery?

How does the historical context affect your sense of race and ethnicity? And after watching Somerville interact with the workers and Jehar, etc, do you feel our racial history has changed much in light of the West’s relationship to the Middle East? Are we considerate? And, are the characters necessarily products of their racial dynamics and histories, or do they act on an entirely individual level? If so, to what extent?

How does Jehar’s relationship with Ninanna compare to those of the Westerners in the story? Land of Marvels iterates that Jehar has turned his life into a story. What does this mean? Does it make his love for Ninanna and his dealings with Somerville more complicated? By all accounts Jehar has done this purposefully, why do think he has chosen to “make his life a story”? Does it protect him?

With the pervasiveness of duplicity in the story, does anyone act as a moral compass? How can we determine right from wrong in this atmosphere? Is that even possible?

This story is more than just historical fiction: it is also a tragedy. What are the characters’ tragic flaws? What leads to their undoing?

Jehar reflects on the Land of Two Rivers, and how the land has had many inhabitants: Sumerians, Babylonians, Hittites, Assyrians, Medes, Chaldeans – all bent on conquest, all convinced they would last forever. Does this reflection seem relevant considering the US invasion of Iraq? Has anything changed? If not, do you believe it will?

The relationship between Edith and Patricia symbolizes the collision of two reigning world views on gender at the beginning of the 20th century. While Patricia corrects the men and asserts herself, in a “progressive” manner, Edith believes Patricia is out of order, that women should know “their place”. Yet, Edith is the one that has the affair with Elliot, and Patricia is the one that settles for domestic bliss with Palmer. Do you think Edith’s infidelity is a form of liberation for her? Or does it demonstrate a condemnation to unhappiness? What of Patricia? Are their paths opposite? Is Patricia repeating the past that is represented in the chaste domesticity of Edith at the beginning of the story?

In the end, when Somerville finally opens the ancient coffin in the pit at Tel Erdek, Unsworth writes, “Edith and Patricia came forward now and joined the men.” Is this a significant moment? What were they joining? We are given the sense that until this moment, they were not allowed to share in the intimate and momentous discovery, but now they join the men and look into the coffin, face to face with history. Are the women now part of this history, that hitherto they were excluded?

Knowing the perilous end of the story, should Somerville still have started his dig? He seems to be one of the only characters that must lead head on into doom. Where he is stubborn and arguably arrogant and idealistic, the others have very particular goals in mind. What is Somerville’s goal, and is it somehow more aimless? What’s its purpose in the story?

The “dig” is a clear allegory for history itself: how we write it; what it takes to preserve it; the notion that what we can learn is buried deep in the past, or literally underground; the idea that vast treasures await our mining of them. What does Land of Marvels “dig” up? Is it like an archeological dig through social and political history? How so?

It is widely regarded that fiction has the capacity to teach or inform its audience. Did Land of Marvels teach you anything new or enlightening about the history of the Middle East? What did you learn?