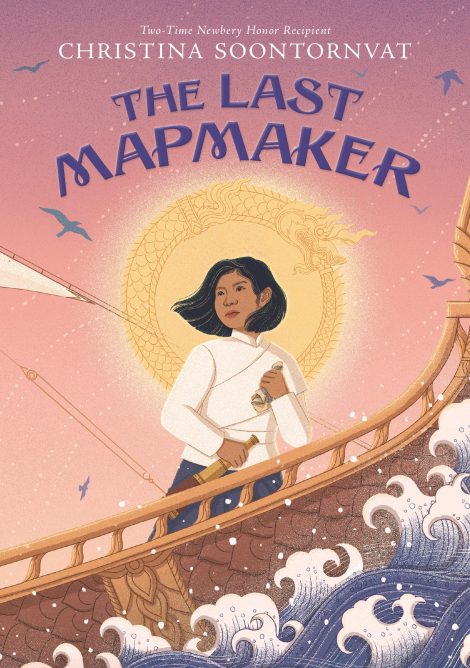 In a fantasy adventure every bit as compelling and confident in its world building as her Newbery Honor Book A Wish in the Dark, Christina Soontornvat explores a young woman’s struggle to unburden herself of the past and chart her own destiny in a world of secrets. As assistant to Mangkon’s most celebrated mapmaker, twelve-year-old Sai plays the part of a well-bred young lady with a glittering future. In reality, her father is a conman—and in a kingdom where the status of one’s ancestors dictates their social position, the truth could ruin her. Sai seizes the chance to join an expedition to chart the southern seas,

In a fantasy adventure every bit as compelling and confident in its world building as her Newbery Honor Book A Wish in the Dark, Christina Soontornvat explores a young woman’s struggle to unburden herself of the past and chart her own destiny in a world of secrets. As assistant to Mangkon’s most celebrated mapmaker, twelve-year-old Sai plays the part of a well-bred young lady with a glittering future. In reality, her father is a conman—and in a kingdom where the status of one’s ancestors dictates their social position, the truth could ruin her. Sai seizes the chance to join an expedition to chart the southern seas, but she isn’t the only one aboard with secrets. When Sai learns that the ship might be heading for the fabled Sunderlands—a land of dragons, dangers, and riches beyond imagining—she must weigh the cost of her dreams. Vivid, suspenseful, and thought-provoking, this tale of identity and integrity is as beautiful and intricate as the maps of old.

From Christina Soontornvat, the visionary and versatile author of two 2021 Newbery Honor Books, comes a high-seas adventure set in a Thai-inspired fantasy world. 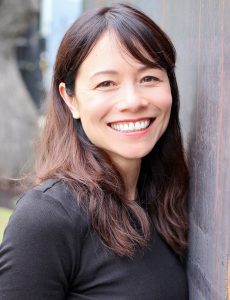 Christina Soontornvat grew up in a small Texas town, where she spent many childhood days behind the counter of her parents’ Thai restaurant with her nose in a book. She is the author of many books for young readers, including the Newbery Honor Books A Wish in the Dark and All Thirteen: The Incredible Cave Rescue of the Thai Boys’ Soccer Team, also a Robert F. Sibert Honor Book and a YALSA Award for Excellence in Nonfiction for Young Adults finalist. Christina Soontornvat lives in Austin, Texas.

“All along, Soontornvat (a Newbery honoree for “A Wish in the Dark”) skillfully uses tropes to throw us off. Introduce a young, woebegone heroine questing after a flying monster for glory and the reader can’t help chasing the dragon with her.” – The New York Times Book Review

“Exploits on the high seas and complex characters combine in a tale full of both excitement and heart. An engrossing adventure with the feeling of a whole world to be explored.”– Kirkus Reviews (starred review)

“A gripping story with multiple layers, including action, magic, and a ­thought-provoking through line of colonization and the role of manifest destiny, this original novel will leave middle grade readers wanting to journey through this land of dreams and dragons again and again.” – School Library Journal (starred review)

“A gutsy young apprentice sails off the edge of the map in this bold, high-stakes fantasy adventure. . . This bighearted, moving tale of finding one’s place and living by a moral compass is eminently seaworthy and set in a rich, thoughtfully built world.” – Shelf Awareness (starred review)

1. Describe Sai’s background. Where does she live when thebook opens? What is her father like? Discuss their relationship. How did Sai manage to get a job with Paiyoon? Talk about her strengths as well as some of the mistakes she makesin the story, using specific examples.

2. In the acknowledgments, the author mentions mentors and the gifts they bestow. How is Master Paiyoon a mentor to Sai? What does he teach her? What does he value about her? Explain why Sai thinks Paiyoon is overlooking important information on the maps during the sea journey. What is he really doing and why?

3. In Mangkon, how does status impact a person at a young age? What’s the significance of a lineal? What does it mean for a person to have many versus very few (or no) lineals? What would a lineal mean to Sai? How would it have made her life different? Is there anything in our culture that is similar to lineals?

4. Who is Rian, and what is her background? Why is she important to the story? Discuss why Sai is so pleased when Rian befriends her and what Sai believes they have in common. What are Rian’s goals? How does she go about trying to accomplish them? Describe her relationship with Sangra and how Rian exploits it. What happens to Rian in the end?

5. Describe Sangra, her past, and how she became captain of the ship. When does she appear to be harsh, and why is Paiyoon concerned about it? What is the secret from Sangra’s past that makes the stop at Pitaya so important to her? What does Sangra hope for, and how much of that has been fulfilled by the story’s end?

6. Bo says to Sai, “It’s not easy keeping up a lie day in and day out” (page 197). What lie is he talking about? What does Sai know about keeping up lies for a long time? Talk about the lies, deceits, and secrets of various characters, including how Rian deceives others.  What are some of the reasons that the characters lie? Discuss Sai’s ability as a forger. How is forgery a form of deceit?

7. In speaking of the phrase The Tail Is the Teeth, Sai says, “I had heard those words all my life. They meant that no matter how hard you tried, you couldn’t escape who you were or where you came from” (page 39). How does she feel about that idea? In what way do the lineals symbolize it? Discuss Bo’s attitude toward “all the lineal stuff ” and its implication that he’s “worth less than some other kid just because they wear a stupid metal bracelet” (page 196).

I must have looked like all the other Assistants standing in line for breakfast that morning at the Three Onions Café. We all wore the same starched white shirts, gray trousers, and stiff black cotton aprons with deep pockets. The Assistant’s uniform was meant to put each of us on the same level, making us equals for the one year we would spend in service.

We may have worn the same clothes, but it was still clear as glass where we stood. We knew without asking who among us had carriages and who had to walk, whose mothers held important positions on this or that council, which of us had maids and which ones had to clean out their own bed pots. No one ever said anything, but we knew.

I lingered at the back of the line, doing my impression of the shy girl: feet tilted inward, head tipped down, looking like someone who had nothing to add to the conversation. You could learn more about people if they didn’t think you were worth talking to, and I had a whole list of other details I needed to pay close attention to if I was going to play along with them.

Hair: combed free of lice and braided lovingly by my “mother” (or even better—my “maid”). Fingernails: cleaned out and fi led. Shoes: the right kind, purchased from the right shop, shined, and with nothing icky sticking to the soles. Spine: held straight, as if I were proud of where I came from and had a bright future to look forward to.

I coughed to mask the sound of my growling stomach. A full belly was the one thing I couldn’t fake, and coming to the Three Onions in the morning only made the grumbling worse. The steam in the wood-paneled restaurant smelled of fresh oysters, chopped garlic, and green herbs. It took real effort not to stick out my tongue and lick the air.

Something felt different from other mornings, though. The kids in line were chattier than usual. A tall Assistant leaned her elbow on the counter while the others pressed in close, hanging on her words. I called her Tippy because of the way she tipped her head back to look down at the rest of us. I didn’t know much about her except that she worked for a Master Pastry Chef near the temple square. Tippy had always been popular and pretty, but that morning, she was glowing.

She laughed and smoothed her long braid over her shoulder. The light from the café windows bounced off something golden and shiny at her wrist.

So that was it. A lineal.

A pang of jealousy worked its way into my empty stomach. She must have turned thirteen the day before.

The other Assistants pushed in closer to gape at Tippy’s gold bracelet. “Hold it up so we can all see!” said one of them. “Oh, it’s so pretty!”

The others oohed and aahed as Tippy held up her wrist and gave the bracelet a little jangle.

“How many links is that—five?” asked another girl, unable to hide the envy in her voice. That spring, she had been the first among us to get her lineal. She touched it now self-consciously: four golden loops hanging from a brooch pinned to her blouse.

Everyone murmured and pressed in closer to count the golden rings of her bracelet for themselves. Each link in a lineal represented one generation of ancestors—ancestors whose names you knew, ones you were proud to claim.

In my mind, I let out a snort. With a background that fi ne, what was she doing as a baker’s Assistant?

Suddenly, I realized that all the eyes in the café had turned to me.

Tripe! At least I thought I’d snorted in my mind.

Tippy narrowed her eyes at me. “You, at the back of the line. What’s your name?”

“Order forty-nine!” shouted a shrill voice behind the counter.

I squeezed past the girls to get to the counter, then bowed to Mrs. Noom and took the container of porridge from her. “Thank you, ma’am,” I said in the meekest version of my shy-girl voice. “I had better be going. I’m already late!”

I could feel the other Assistants’ eyes on me as I passed. I knew they were sizing me up. They couldn’t look down their noses at me until they figured out which rung of the ladder I stood on.

And what if they knew the truth—that I wasn’t even on the ladder? That in a few months, when I turned thirteen, there wouldn’t be so much as a cake crumb, let alone a lineal celebration? I had no proud family line, no noble ancestors. There was exactly one link to my past, and it certainly wasn’t made of gold.

If they knew the truth, they would think I was nothing.

And who could blame them?