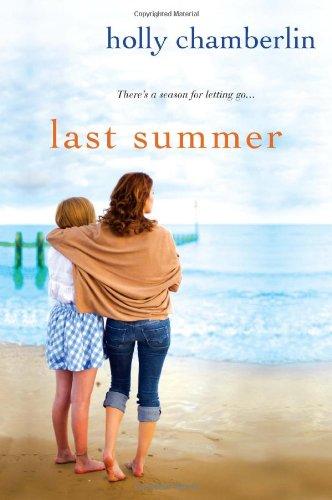 Holly Chamberlin, bestselling author of The Family Beach House and Summer Friends, weaves a powerful and heartfelt story of the bond between mothers and daughters, and the resilience of true friendship…

The town of Yorktide, close to Maine’s beautiful beaches and the city of Portland, seems like the perfect place to raise a family. For Jane Patterson, there’s another advantage: her best friend, Frannie Giroux, lives next door, and their teenaged daughters, Rosie and Meg, are inseparable. But in the girls’ freshman year of high school, everything changes.

Jane always felt lucky that she was able to work from home,

Holly Chamberlin, bestselling author of The Family Beach House and Summer Friends, weaves a powerful and heartfelt story of the bond between mothers and daughters, and the resilience of true friendship…

The town of Yorktide, close to Maine’s beautiful beaches and the city of Portland, seems like the perfect place to raise a family. For Jane Patterson, there’s another advantage: her best friend, Frannie Giroux, lives next door, and their teenaged daughters, Rosie and Meg, are inseparable. But in the girls’ freshman year of high school, everything changes.

Jane always felt lucky that she was able to work from home, to be there to nurture and protect Rosie. But has she been too protective? Rosie—quiet, shy, and also very pretty—attracts the sneers and slights of a clique of older girls. Over time, the bullying worsens. When Meg betrays their friendship, fearful that she too will be targeted, Rosie suffers an emotional breakdown.

Blaming both Meg and Frannie, Jane tries to help Rosie heal while dealing with her own guilt and anger. In the months that follow, each struggles with the ideas of forgiveness and compassion, of knowing when a friendship has been shattered beyond repair—and when hope can be salvaged, one small moment at a time…

"Friends are forever in this exploration of bullying—a troubling hot-button topic that comes into shocking focus here for two families torn apart by a heartless clique of mean girls. Sweet and sensitive Rosie, an only child, spirals into a dangerous depression and breakdown—including ‘cutting’ and anorexia—after she’s targeted by a crew of nasty teens and then betrayed by best friend Meg, who blurts out an embarrassing secret to the bully pack. ‘Meg broke a solemn oath… I feel like dying,’ Rosie confides in increasingly heartbreaking and frightening diary entries. The campaign of harassment also drives a painful wedge between the girls’ mothers, Jane and Frannie, who agonize over their children’s pain as well as their own damaged friendship. Even the rock-solid marriage of Rosie’s parents, Jane and Mike, begins to crack under the strain of the cruel harassment, as they both lie about their shared guilt. Chamberlin (Summer Friends) is pitch-perfect in her depiction of Rosie and Meg struggling to grow up, love, and forgive themselves and each other."—Publishers Weekly

Talk about how Meg’s perception of Rosie changes

over the course of the story. For example, at one point

Meg tells us she has always felt protective of Rosie.

How does she come to realize that her friend has hidden

Talk about how Rosie’s perception of Meg changes

over the course of the story. For example, at one point

Rosie tells us she has always seen Meg as the strong

one. How does she come to realize that Meg is vulnerable,

Though she loves her mother, Meg is determined not

to follow in her footsteps and wind up with a deadbeat

Do you think Meg will succeed in her determination

to go to college and build a successful career? Do you

think she will be a happy woman?

At the end of the story, Rosie looks forward to a productive

future, perhaps as a writer or working in the

elder care industry. Where do you see her in ten years’

time? Twenty? Looking back on her childhood and

adolescence, how do you think the adult Rosie will assess

her parents’ marriage and the family’s dynamic?

Do you think Meg and Rosie’s friendship will survive

poor character from her daughter? Or is

brutal honesty best in such a situation? Do you think

Frannie will be as open about Peter’s character with

her son when he reaches Meg’s age? If not, why?

Jane loves her husband and feels very dependent upon

him as the stronger and more courageous person in

the relationship. And if not a particularly effusive

man, Mike seems to be an attentive husband. Given

what relatively little we know of it, what is your opinion

of the Pattersons’ marriage? If you could predict

the future for Jane and Mike, what would it be?

Both Jane and Frannie talk about the frustrations of

being a parent—damned if you care too much and

damned if you don’t care enough. With this in mind,

talk about each woman’s parenting choices. For example,

and only for adults, and yet Frannie has difficulty

agreeing with that assessment and chooses not to investigate

Meg’s use of the Internet. Interestingly, Jane,

who is a helicopter parent in many ways, never once

thinks to read her daughter’s diary. How do you explain

each woman’s choices? Do you think Jane and

Frannie really trust their daughters and respect their

privacy, or do you think each woman is simply afraid

of what she might find if she engages in active monitoring?

In what circumstances would you read your child’s

private diary or journal? In what circumstances would

you track her use of the Internet and social media services?

the past few years. Is reading someone’s private, handwritten

papers different from tracking her e-mails or

her online profiles? If so, in what ways? And is one

more or less acceptable than the other? When, if ever,

Frannie, and Meg. Jane blames herself for being overprotective

of her daughter and for an emotional cowardice

that put her daughter’s physical and mental

health in jeopardy. Rosie, for a time, blames herself for

the unhappiness of everyone around her, as well as for

being the cause of her own bullying. Frannie blames

herself for being too busy to be a better parent, and for

being ungrateful for the good things in her life. And

Meg blames herself for being a lousy friend and a disappointing

daughter. In each case, when is self-blame

or guilt healthy, and when does it become an indulgence

The theme of forgiveness looms large in this story.

Talk about each character’s journey toward real forgiveness,

of herself and of others. For example, what

do you think really stands in the way of Jane reconciling

with Frannie? Meg wonders if her father will ever

ask her forgiveness for being a bad parent and also

wonders if she’ll be able to forgive him whether he

asks for forgiveness or not. What do you think will become

of that damaged relationship? Rosie’s therapist

tells her that she’ll have to first forgive herself before

she can truly forgive others. Do you think that by the

story’s end Rosie has come to understand this concept?

The ability to forgive seems to come fairly easily

for Frannie, at least when it’s toward her daughter and

best friend. She says that she doesn’t hate Peter any

longer, but do you think she has really forgiven her ex-

husband for being neglectful of his family?

Some people argue that no one deserves forgiveness,

been wronged. Do you think that a person must accept

the gift of forgiveness offered her and admit to

feeling remorse in order for the “transaction” to be

completed? Or is there really such a thing as “unilateral

forgiveness”? Talk about these ideas, considering,

for example, Meg’s and then Stella’s apology to Rosie.

is an act of courage that involves the capacity for

imagination. Talk about this idea.

Talk about your own experiences with bullying, or

“relational aggression,” as a child and as an adult. Do

you think bullying is on the rise, or has our awareness

of it simply increased? Cyber-bullying is a relatively

new form of harassment, one that can be particularly

invasive and destructive. Discuss how it differs from

Traditionally, boys and girls have engaged in different

types of harassment. In general, boys who bully feel

the need to be powerful and in control; they take pleasure

in the suffering of others. Some of their most

and blackmail. In general, girls who bully seek social

dominance by excluding others from the network of

friends. Some of their most common weapons are

about these differences. In what ways are male and female