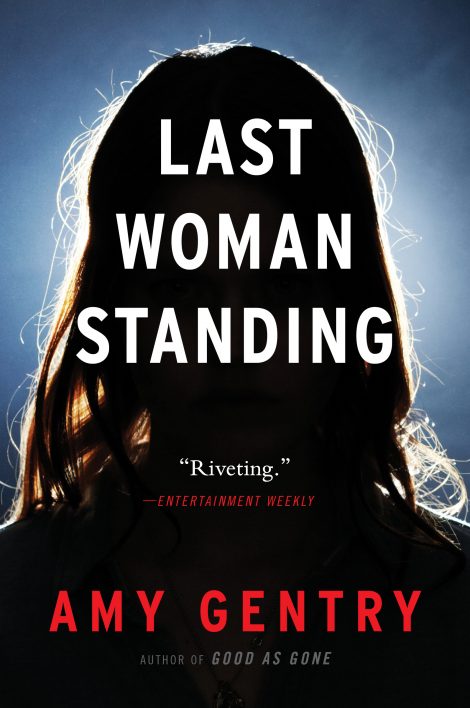 From the author of Good as Gone comes a brilliant and timely thriller: Strangers on a Train by way of Thelma and Louise.

Dana Diaz is an aspiring stand-up comedian—a woman in a man’s world. When she meets a tough computer programmer named Amanda Dorn, the two bond over their struggles in boys’ club professions. Dana confides that she’s recently been harassed and assaulted while in L.A., and Amanda comes up with a plan: they should go after each other’s assailants, Strangers on a Train–style. But Dana finds that revenge,

From the author of Good as Gone comes a brilliant and timely thriller: Strangers on a Train by way of Thelma and Louise.

Dana Diaz is an aspiring stand-up comedian—a woman in a man’s world. When she meets a tough computer programmer named Amanda Dorn, the two bond over their struggles in boys’ club professions. Dana confides that she’s recently been harassed and assaulted while in L.A., and Amanda comes up with a plan: they should go after each other’s assailants, Strangers on a Train–style. But Dana finds that revenge, however sweet, draws her into a more complicated series of betrayals. Soon her distrust turns to paranoia, encompassing strangers, friends—and even herself. At what cost will she get her vengeance? Who will end up getting hurt? And when it’s all over, will there be anyone left to trust?

Amy Gentry is the author of Good as Gone, a New York Times Book Review Notable Book. She is also a book reviewer and essayist whose work has appeared in numerous outlets, including the Chicago Tribune, Salon, the Paris Review, the Los Angeles Review of Books, and the Austin Chronicle. She holds a PhD in English from the University of Chicago and lives in Austin, Texas.

“A twisty and engrossing thriller that will keep you guessing until the very end.” — Karin Slaughter, international best-selling author

“Last Woman Standing may be the first standout suspense novel of 2019. Female rage, stand-up comedy, Highsmith homage, and some surprises that got even me.” — Sarah Weinman, author of The Real Lolita

“A harrowing and razor-sharp thriller, Amy Gentry’s Last Woman Standing feels both ripped from the headlines and utterly timeless as it takes on gender and violence and the far limits of female rage. As the story twists and turns, you’ll feel breathless, troubled and helplessly propelled to its deeply satisfying final pages.” — Megan Abbott, author of You Will Know Me

“Savage, brilliant, and pulse-poundingly gripping, Last Woman Standing will leave you stunned. Amy Gentry’s revenge thriller is an explosive answer to America’s long ignored culture of sexual violence, and she uses all the tools of modern life—technology, apps, entertainment, and social media—to create a world where victims become vigilantes and there’s nowhere to hide. Gentry’s gift for tapping into both the humanity and darkness of every character works its way into the reader’s subconscious, making us attempt to draw an impossible line between justice and vengeance. An absolute must-read for 2019.” — Mindy Mejia, author of Everything You Want Me to Be and Leave No Trace

“I read Last Woman Standing over the course of one thrilling afternoon—it’s a heart-pounding look at the line between justice and vengeance, and what happens when someone leaps over that line. It’s also a thoughtful look at how women are perceived and treated in male-dominated industries and beyond, and the lasting effects of such treatment, shedding light on an important and pertinent topic in our culture.” — Rena Olsen, author of With You Always and The Girl Before

A few hands clapped as I stepped up onto the wooden platform stage, picking my way around the PA system. Under the lights, I tugged my shirt hem away from the waistband of my jeans one last time, cleared a strand of dark brown hair from my lip-glossed smile, and palmed the mic, carefully unwrapping the cord from the stand. No point in losing two minutes wrestling it down to my level — five foot four in the four-inch heels I am rarely without onstage.

“Hello, everyone,” I said. “Welcome to the Nomad open-mic; I will be your brown person for the evening.”

I waited for the uncomfortable snicker, but there was only the dim, offended pause of a bar in which the music had been turned off, followed by a hacking cough. I forged ahead.

“Just don’t expect me to answer your questions about Mexican culture. Like, mole sauce. What gives? Was someone walking along eating a Hershey Bar and tripped, and it landed in a pan of enchiladas?” Nothing. I mimicked the old commercial: “‘Hey, you got your chocolate on my enchiladas!’ ‘You got your enchiladas on my chocolate!’?” One person tittered. “And don’t tell me to go back where I came from. Amarillo is the pits.” Silence again. I toyed with the mic stand. “Have we got anyone here from Amarillo tonight? No one?” There was no hoot. “It’s okay, I wouldn’t cop to it either if it wasn’t my job. Well, hobby.”

I’d been back in Austin a little over a year, performing as many open-mics and guest spots and showcases as I could force myself to show up for, and I’d earned my slot in the Nomad Third Thursday lineup fair and square. But nothing was landing lately, and I wasn’t sure why.

I pressed on. “There’s not a lot to do in Amarillo. I mean, the second-largest employer is a helium plant. When I was in high school, we used to hang out behind the Seven-Eleven and—” I mimed sucking on a Mylar balloon, then made my voice high and squeaky: “Hey, dude, stop bogarting the Happy Birthday from SpongeBob and Friends.”

Blank stares. If my pothead voice has never been too convincing, it’s because my weekends in high school were actually pretty clean. My best friend and I saw what drugs did to his big brother and wanted nothing to do with them. I made a mental note to work on my funny voice and kept plowing through the set. “My mom worked at the plant when I was a kid. For the longest time I thought she was a birthday clown.” Beat. “Take Your Daughter to Work Day was a real disappointment.”

Scanning the seats closest to the stage for a friendly face, I saw only dull-eyed drunks and bad Tinder dates. I let my mind drift into the depthless glare of the lights. It was Jason, my writing partner and best friend since we were fourteen, who’d told me long ago to find the friendliest face in the crowd when I was bombing and focus on telling all my jokes to that person alone. Jason’s trick rarely won the audience back, but I’d bombed enough by now to know that didn’t matter as much as showing the audience you were doing just fine up there, thank you. Nothing is more cringe-inducing than watching someone flail onstage. Privately, I had a name for this rule: No blood in the water.

I could feel myself fidgeting to the right and left, straining my voice to sound bigger. After four years in Los Angeles, it was a struggle to relax in this too-easy town. I missed the grind. The crowds in L.A. had been tough, but they’d made me tougher too; here in Austin, indifference was the killer. By the time I left L.A., Jason was barely talking to me, so I didn’t bother telling him what I told everybody else: I needed a break, just a short one, and then I’d return. But it was harder than it sounded. Last time I’d made the move, I was five years younger, and I wasn’t alone. Everything had been easier with Jason, who knew where we’d come from and how important it was to keep moving forward so we’d never slide back.

So much for that. After four years in L.A., Austin felt like it had when I was first starting out, except the comedy scene was more crowded and the beer more expensive.