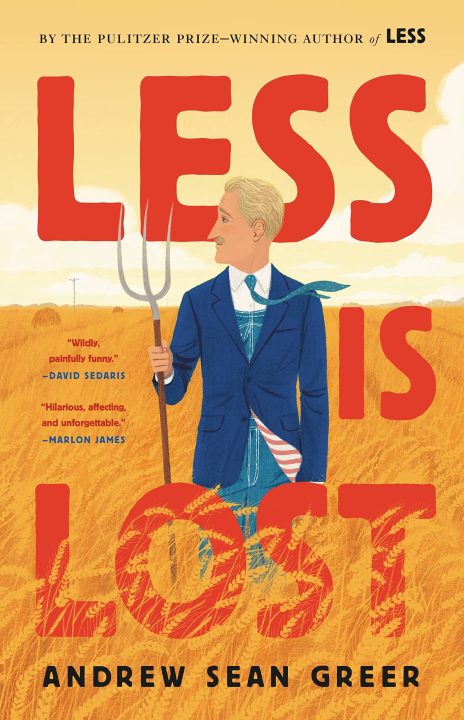 Less roves across the “Mild Mild West,” through the South and to his mid-Atlantic birthplace, with an ever-changing posse of writerly characters and his trusty duo – a human-like black pug, Dolly, and a rusty camper van nicknamed Rosina. He grows a handlebar mustache, ditches his signature gray suit, and disguises himself in the bolero-and-cowboy-hat costume of a true “Unitedstatesian”… with varying levels of success, as he continues to be mistaken for either a Dutchman, the wrong writer, or, worst of all, a “bad gay.”

We cannot, however, escape ourselves—even across deserts, bayous, and coastlines. From his estranged father and strained relationship with Freddy, to the reckoning he experiences in confronting his privilege, Arthur Less must eventually face his personal demons. With all of the irrepressible wit and musicality that made Less a bestselling, Pulitzer Prize-winning, must-read breakout book, Less Is Lost is a profound and joyous novel about the enigma of life in America, the riddle of love, and the stories we tell along the way. Andrew Sean Greer is the Pulitzer Prize winning author of six works of fiction, including the bestsellers The Confessions of Max Tivoli and Less. Greer has taught at a number of universities, including the Iowa Writers Workshop, been a TODAY show pick, a New York Public Library Cullman Center Fellow, a judge for the National Book Award, and a winner of the California Book Award and the New York Public Library Young Lions Award. He is the recipient of a NEA grant, a Guggenheim Fellowship, and the 2018 Pulitzer Prize for Fiction. He lives in San Francisco.

“Only Arthur Less could be both frustratingly stuck, yet on the move. Let loose, yet totally lost. Full of wit, but without a clue. And while he runs from himself, finds himself at the same time. Put all of that on a wild road trip through a wilder America, and you end up with something hilarious, affecting, and unforgettable.”—Marlon James, winner of the 2015 Booker Prize

“Does Andrew Greer think of himself as a comic novelist? Does a giraffe think of itself as a giraffe? Probably it doesn’t matter. This book, though, is wildly,  painfully, funny. It sometimes hurts to read it.”—David Sedaris, author of Happy-Go-Lucky

“It is a deep pleasure to return to the adventures of Arthur Less and his beloved Freddy. Greer is a brilliant storyteller as always, and the joyfulness of this book is a balm. I loved reading it.”—Madeline Miller, bestselling author of CIRCE

“What a joy to be reunited with the beloved, hapless, utterly delightful Arthur Less. With tenderness, wit and his incomparably lovely prose, Greer probes that most profound and mysterious of subjects: love.”—Katie Kitamura, author of Intimacies

“Arthur Less is back for more. Readers met the gay, middle-aged, fictional novelist in Andrew Sean Greer’s novel Less, which won a Pulitzer Prize in 2018. Now, Less is channeling his emotions over his former partner’s death into a U.S. road trip, bouncing from literary gig to gig. Along the way, expect him to transform in surprising—and inevitably amusing—ways. Less Is Lost is a satisfying sequel about resilience and choosing love.”—TIME Magazine

“Less Is Lost is a generous, funny, deeply insightful novel and I recommend it to readers without hesitation.”—Boston Globe

“If the first iteration of Less’s adventures saw him bumbling across Europe and Asia, [Less is Lost] finds him even more out of place, a stranger in his homeland. By turns deliriously funny and devastatingly heartbreaking, Greer’s sequel is an always-moving escapade through middle age.”—Michelle Hart, Electric Lit

1. Less is Lost picks up nine years after Less, with Arthur Less and Freddy Pelu now well into their middle age. If you’ve read Less, what is the experience like encountering these characters again at a different stage in their lives? What has changed for them? What hasn’t?

2. Less’s former “great love” is Robert Brownburn. Previously, Less was the younger, more naïve figure and Brownburn was the older, poetic “genius” of the couple. In what ways does Less and Brownburn’s previous relationship mirror Freddy and Less’s current one in Less is Lost? How do their relationships differ?

3. A central theme in Less is Lost is processing grief through the death of Less’s previous partner. How is grief portrayed through Less and Freddy, and how does each of them struggle to cope? How can grieving a former lover affect one’s current relationship?

4. Less is Lost follows Less’s expansive cross-country road trip, from Palm Springs and Santa Fe to stops in Mississippi, Tennessee, Georgia, Virginia, and all over Delaware. What are some of your favorite descriptions of America (ex: food, setting, the locals) in the book?

5. Less’s steadfast travelling companions become a black pug, Dolly, and a camper van nicknamed Rosina. How does Greer examine the loneliness one experiences when travelling or being away from home? Have you yourself ever stumbled into an unlikely friendship or unknown territory, and what was that experience like?

6. Greer examines writerly success and financial instability through Less as a “Minor American Novelist.” What does success in your career mean to you, and does it align in any way with Greer’s perspective?

7. What were some instances when Less was confronted with questions about heritage, race, and his own privilege during his road trip? How does Greer specifically challenge the theme of belonging through Less’s relationship with his father?

8. As he did in LESS, Greer explores the idea that we cannot escape ourselves in Less is Lost through his runaway protagonist, Arthur Less. In what ways does Less’s road trip give him clarity on his relationships, age, and career? What are some questions left unanswered?

9. How did you feel reading the reveal of Freddy’s own journey at the end?

10. What are some moments or lines in the book that made you laugh out loud?