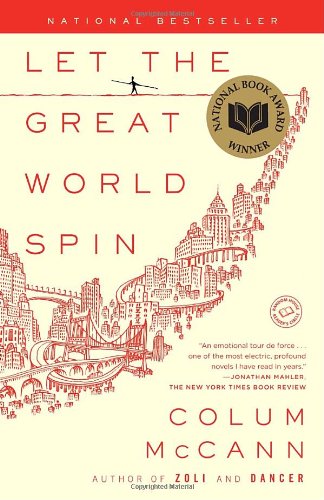 In the dawning light of a late-summer morning, the people of lower Manhattan stand hushed, staring up in disbelief at the Twin Towers. It is August 1974, and a mysterious tightrope walker is running, dancing, leaping between the towers, suspended a quarter mile above the ground. In the streets below, a slew of ordinary lives become extraordinary in bestselling novelist Colum McCann’s stunningly intricate portrait of a city and its people.

Let the Great World Spin is the critically acclaimed author’s most ambitious novel yet: a dazzlingly rich vision of the pain, loveliness, mystery, and promise of New York City in the 1970s.

In the dawning light of a late-summer morning, the people of lower Manhattan stand hushed, staring up in disbelief at the Twin Towers. It is August 1974, and a mysterious tightrope walker is running, dancing, leaping between the towers, suspended a quarter mile above the ground. In the streets below, a slew of ordinary lives become extraordinary in bestselling novelist Colum McCann’s stunningly intricate portrait of a city and its people.

Let the Great World Spin is the critically acclaimed author’s most ambitious novel yet: a dazzlingly rich vision of the pain, loveliness, mystery, and promise of New York City in the 1970s.

Corrigan, a radical young Irish monk, struggles with his own demons as he lives among the prostitutes in the middle of the burning Bronx. A group of mothers gather in a Park Avenue apartment to mourn their sons who died in Vietnam, only to discover just how much divides them even in grief. A young artist finds herself at the scene of a hit-and-run that sends her own life careening sideways. Tillie, a thirty-eight-year-old grandmother, turns tricks alongside her teenage daughter, determined not only to take care of her family but to prove her own worth. Elegantly weaving together these and other seemingly disparate lives, McCann’s powerful allegory comes alive in the unforgettable voices of the city’s people, unexpectedly drawn together by hope, beauty, and the “artistic crime of the century.” A sweeping and radical social novel, Let the Great World Spin captures the spirit of America in a time of transition, extraordinary promise, and, in hindsight, heartbreaking innocence. Hailed as a “fiercely original talent” (San Francisco Chronicle), award-winning novelist McCann has delivered a triumphantly American masterpiece that awakens in us a sense of what the novel can achieve, confront, and even heal.

Colum McCann is the internationally bestselling author of the novels Zoli, Dancer, This Side of Brightness, and Songdogs, as well as two critically acclaimed story collections. His fiction has been published in thirty languages. He has been a finalist for the International IMPAC Dublin Literary Award and was the inaugural winner of the Ireland Fund of Monaco Literary Award in Memory of Princess Grace. He has been named one of Esquire’s “Best and Brightest,” and his short film Everything in This Country Must was nominated for an Oscar in 2005. A contributor to The New Yorker, The New York Times Magazine, The Atlantic Monthly, and The Paris Review, he teaches in the Hunter College MFA Creative Writing Program. He lives in New York City with his wife and their three children.

“Stunning… [an] elegiac glimpse of hope…It’s a novel rooted firmly in time and place. It vividly captures New York at its worst and best. But it transcends all that. In the end, it’s a novel about families – the ones we’re born into and the ones we make for ourselves.”
—USA Today

“A shimmering, shattering novel. In McCann’s wise and elegiac novel of origins and consequences, each of his finely drawn, unexpectedly connected characters balances above an abyss, evincing great courage with every step.”—Booklist (starred review)

“This is a gorgeous book, multilayered and deeply felt, and it’s a damned lot of fun to read, too. Leave it to an Irishman to write one of the greatest-ever novels about New York. There’s so much passion and humor and pure lifeforce on every page of Let the Great World Spin that you’ll find yourself giddy, dizzy, overwhelmed.”
—Dave Eggers, editor of McSweeney’s and author of
What Is the What

“In his own gritty and lyrical voice, Colum McCann has lifted up a handful of souls to the light in this big-hearted, adroit and probing novel, and brought forth a spectrum of the painful, the beautiful and the unexpected.”—Amy Bloom, author of Away

Let the Great World Spin brings us into the lives of a dozen different fictional characters from many walks of life, from Park Avenue mothers to street-walking prostitutes to computer hackers to radical monks. Why does Colum McCann embrace such a diverse tapestry of characters? Is it reflective of the all-encompassing nature of the city?

The novel tales place almost exclusively in New York, but could it have taken place in any other city in the world? Is there an “everyman”quality to the characters? Or does the novel need New York to make it “spin”?

The “walker” is suggested by Philippe Petit, who actually walked a tightrope across the World Trade Center towers in August 1974. However, McCann never uses his name, except in the acknowledgments, and the tightrope walker in the novel remains largely anonymous. The drama of the walk gets superseded by the drama of the ordinary lives. Is McCann suggesting that the ordinary gesture is as important as what was once called “the artistic crime of the twentieth century”? Is the ordinary life (Corrigan’s, Lara’s, etc.) as important as the grand public life?

The characters are woven together, but they do not realize how close they are to one another. What is the web that holds them together? Is this a genuine reflection of life? Are any of the characters not tied together? What, in your opinion, happens to the phone phreakers?

In the chapter titled “This Is the House That Horse Built,” we get an intimate glimpse of the life of a New York prostitute in the 1970s. Do you think Tillie achieves grace despite the circumstances of her life?

If you were to have one character tell this story, who would you choose? What does that choice reflect in us, the readers? Would the novel still be able to achieve a kaleidoscopic viewpoint?

Most of the novel takes place when the World Trade Center was being completed in 1974, when liberation theology was forging an identity (Corrigan), when artists were pushing frontiers (Lara), when the Internet was being born (the phone phreakers), when the country was learning to deal with the wounds of Vietnam (Claire/ Joshua). Is the novel more about creation than destruction?

McCann uses a real photograph of a plane going across the sky while the tightrope walker is still in midair. He attributes the byline to a fictional character, Fernando Yunqué Marcano who was introduced in the chapter “Tag.” What effect does this have on the reader? What does McCann want to achieve by interweaving fact and fiction?

Both Corrigan and Jazzlyn—two of the main towers of the novel—die in the first chapter. Why are these particular characters chosen for the fall? Much of the rest of the book is spent building their lives up, getting to know them through other people. They are referenced and described, yet we never hear about them in the first person (except in reported speech). Their minds and voices are a curious presence and simultaneous absence. Why does McCann depict these characters in the third person?

Adelita says: “The thing about love is that we come alive in bodies not our own” (page 275). What does she mean by this?

What does Jaslyn discover at the end of the novel, when she goes to visit the aging Claire?

McCann tells us in the Author’s Note that the title is inspired by a nineteenth-century English poem that in turn was inspired by sixth-century Arabic poetry. Now he uses it for a twenty-first century American novel. What connections is the author making?