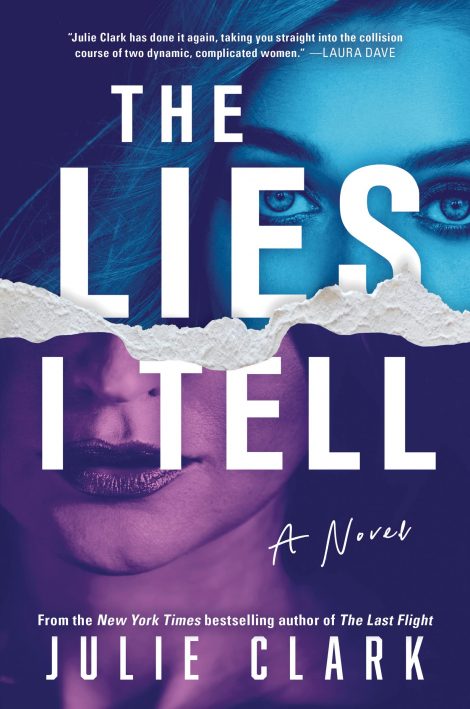 THE LIES I TELL

Meg Williams. Maggie Littleton. Melody Wilde. Different names for the same person, depending on the town, depending on the job. She’s a con artist who erases herself to become whoever you need her to be–a college student. A life coach. A real estate agent. Nothing about her is real. She slides alongside you and tells you exactly what you need to hear, and by the time she’s done, you’ve likely lost everything.

Kat Roberts has been waiting ten years for the woman who upended her life to return. And now that she has,

Meg Williams. Maggie Littleton. Melody Wilde. Different names for the same person, depending on the town, depending on the job. She’s a con artist who erases herself to become whoever you need her to be–a college student. A life coach. A real estate agent. Nothing about her is real. She slides alongside you and tells you exactly what you need to hear, and by the time she’s done, you’ve likely lost everything.

Kat Roberts has been waiting ten years for the woman who upended her life to return. And now that she has, Kat is determined to be the one to expose her. But as the two women grow closer, Kat’s long-held assumptions begin to crumble, leaving Kat to wonder who Meg’s true target is.

The Lies I Tell is a twisted domestic thriller that dives deep into the psyches and motivations of two women and their unwavering quest to seek justice for the past and rewrite the future.

Julie Clark is the New York Times bestselling author of The Ones We Choose and The Last Flight, which was also a #1 international bestseller and has been translated into more than twenty languages. She lives in Los Angeles with her family and a golden doodle with poor impulse control.

“Julie Clark has done it again! In her latest riveting domestic thriller, Clark takes you straight into the collision course of two dynamic, complicated women―who will go to any length to fix their past and find their way to a different future. The Lies I Tell is a winner.” —Laura Dave, #1 New York Times bestselling author of The Last Thing He Told Me

“The Lies I Tell is a uniquely riveting cat and mouse game with two artfully nuanced female protagonists that is at once a razor-sharp, page-turning mystery and a brilliant, thought-provoking exploration of what it truly means to do good in the world.” —Kimberly McCreight, New York Times bestselling author of A Good Marriage and Friends like These

1. One of the most powerful tools in Meg’s arsenal is a familiarity with social media. What do you think she could learn about you from your online presence?

2. Since they both know the other woman is lying about her identi- ty, Meg and Kat also know they shouldn’t trust each other. How does their friendship grow despite this?

3. Discuss the role of ego in Meg’s cons. How do her targets create openings for her with their own bad behavior?

4. At first, Kat blames Meg for what happened with Nate. When do you think she stopped feeling that way?

5. The greatest downside of Meg’s career is the loneliness. Do you think she could have kept in touch with her friends when she started scamming Cory? How would you feel in her position, moving cross-country every few years and not making any permanent connections?

6. Meg believes that scamming Phillip to return Celia’s cottage was a turning point in her career. How was that job different from the others she had run?

7. Why does it take Kat so long to recognize that Scott has relapsed? Where would you draw the line between supporting a partner who is trying to overcome an addiction and protecting yourself?

8. Kat doesn’t trust that Scott will be investigated by his colleagues. Is there incentive for police departments to investigate their officers and detectives? What motivations do they have to sweep corruption and violence under the rug?

9. Meg posits, “The difference between justice and revenge comes down to who’s telling the story.” What does she mean, and do you agree with her?

10. What’s next for Kat and Meg? Do you think Kat will succeed in her new quest? Will Meg really retire from cons?

What inspired you to write The Lies I Tell?

I’m obsessed with true crime podcasts, and a few years ago, I came across one about a con artist who went to elaborate lengths to lure in his victims, gain their trust, and then steal everything they owned. That particular con artist was a man, but I remember thinking, What about female con artists? Would people be more inclined to trust them? From there, my imagination took over.

Like with The Last Flight, I didn’t want to write a female character who was a true sociopath, so I spent a lot of time trying to figure out a way to write a female con artist with a conscience. A woman who used her intellect and wits to do some good in a world where women often get the short end of the stick.

Meg and Kat don’t trust each other, even as they get closer and closer. What was the most challenging part of writing their relationship?

The most challenging part was making sure the relationship evolved naturally, while also keeping the timeline relatively short. Kat has the heavy load of her own trauma that keeps her from seeing Meg clearly at first, and I needed her to slowly begin to embrace Meg, despite who she believed Meg to be. The other challenging part was making sure Meg was simmering with her own pent-up rage, while at the same time keeping her sympathetic to the reader. A lot of plates to keep balanced!

Kat’s relationship with Scott is heavily influenced by his gambling addiction. What did you want readers to take from this conflict?

I want readers to see the complexity and heartache of loving an addict. That they are more than the worst thing they’ve done. I also want readers to remember that our instincts are almost always right. When something seems off, we don’t need to know why; we only need to trust the feeling.

Meg’s philosophy evolves throughout the book from punishment to restoration. Why was it important for you to show this growth?

All characters need growth, even con artists! I don’t really believe that real-world con artists are anything like Meg; however, I don’t really view Meg as a true con artist. She’s a vigilante, exacting her own brand of justice in a world where too many people have the ability to evade it. It’s that quality, I think, that allows us to root for her.

Meg’s greatest disappointment is the transience of her friendships. How do you think you would handle a nomadic and secretive life like hers?

I’m a homebody at heart, so moving every couple years would be really difficult for me. I like my structures and routines, though I admit a part of it might be thrilling—to relocate and completely reinvent your- self, however many times it takes to get it right. I’d be terrible at the secret-keeping though. I’m pretty sure, very early on, I’d let something slip and the game would be over.