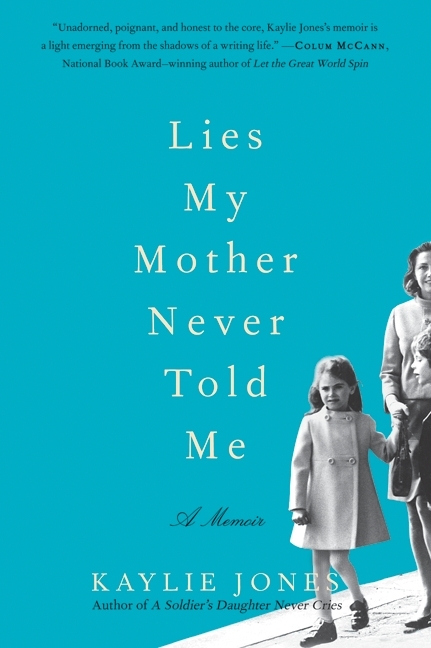 LIES MY MOTHER NEVER TOLD ME

Lies My Mother Never Told Me is the mesmerizing and luminously told story of Kaylie’s battle with alcoholism and her struggle to flourish despite the looming shadow of a famous father and an emotionally abusive and damaged mother. Deeply intimate, brutally honest, yet limned by humor and grace, it is a beautifully written tale of personal evolution, family secrets, second chances, and one determined woman’s journey to find her own voice—and the courage to embrace a life filled with possibility, strength, and love.

Lies My Mother Never Told Me is the mesmerizing and luminously told story of Kaylie’s battle with alcoholism and her struggle to flourish despite the looming shadow of a famous father and an emotionally abusive and damaged mother. Deeply intimate, brutally honest, yet limned by humor and grace, it is a beautifully written tale of personal evolution, family secrets, second chances, and one determined woman’s journey to find her own voice—and the courage to embrace a life filled with possibility, strength, and love.

Kaylie Jones was born in Paris, France, and attended French schools until she returned with her family to the United States in 1974. She attended Wesleyan University and Columbia University’s School of the Arts. She is the author of A Soldier’s Daughter Never Cries, which was made into a film starring Kris Kristofferson and Barbara Hershey, Celeste Ascending, As Soon as It Rains, and Speak Now. She also chairs the James Jones First Novel Fellowship, which awards $10,000 annually to the writer of an unpublished first novel. She lives in New York City.

“Unadorned, poignant and honest to the core, Kaylie Jones’ memoir is a light emerging from the shadows of a writing life.”
—Colum McCann, author of Let the Great World Spin

“A bright, fast-paced memoir with an inviting spirit. There is real immediacy to the family portraits here.”—New York Times

“Shattering, totally scary, yet beautiful….A splendid, splendid book… completely gripping from start to finish, and written with grace and zest….What a fine book.”—Tim O’Brien, author
The Things They Carried and Going After Cacciato

Think about the structure of the book. Why do you think the author included the vignettes at the beginning of each chapter? What do they add to Kaylie’s story?

What is your opinion of James and Gloria Jones? How did their lives as artists influence their children’s development, especially Kaylie’s? Would you want to attend a dinner party where they were guests?

Describe James and Gloria Jones’s marriage. How did their devotion to each other impact their connection to their children? What kind of parents were they? Describe Kaylie’s relationship with each. How did they compare?

Do you think Gloria’s behavior toward Kaylie a result of the alcohol or something deeper? Argue it from both viewpoints. What was their relationship like after Kaylie stopped drinking?

James Jones told his daughter not to let anyone make her feel guilty, that he was done with that. Was this good advice? What role does guilt play in our lives? When can guilt be good and when can it be destructive? How do you define the line between the two?

How did her father’s death when she was 16 impact Kaylie’s life? Though she had him for such a short period of her life, what did Kaylie learn from her father?

After her father’s death, the author turned to his books to learn more about him. Can we know someone through his or her work? Did this help Kaylie? Explain.

Kaylie regrets not having asked her father what books he was reading and why. Do you talk about books with others outside your reading group? Do you ask them about their selections and choices?

In the memoir, the author talks a great deal about her father’s writing and her own. What did you discover about the writing process from the memoir?

Lies My Mother Never Told Me is a celebration of books and a love of literature. What do books offer us as a society? What do books mean to you personally?

Much has been written about the links between depression, alcoholism, addiction, and art. How does one influence or even inspire the other? If one had to choose, would it be better to live a short life and have art or to sacrifice creation for longevity and health?

Nelson Algren, an old family friend and fellow writer, warned Kaylie not to become a writer, decrying that “the novel is dead.” How would you define the state of literature—the novel—today?

Kaylie Jones talks honestly about alcoholism, including her parents drinking and her own. How did her view of alcohol change over the years? What were the factors that led to her acknowledge her problem? What gave her the strength to quit? Why do you think Gloria couldn’t—or wouldn’t?

Today, alcoholism is more widely accepted and discussed, yet as Kaylie explains, it was considered a dirty word in her house. Why do you think this was so? Why do many people still see it as a moral failing? How have we, as a culture, changed our perceptions of alcoholism over the past forty years?

Kaylie’s friend Gianna, offered inspiration to Kaylie for dealing with her mother. “No is a sentence with a period at the end of it.” How did this advice affect Kaylie? How can others use this wisdom to help them overcome their own troubles?

How did mastering Taekwondo shape sober Kaylie’s outlook? What wisdom did she gain from the class and from her instructor, Mr. Bill? How was Mr. Bill like her father?

What insights did you gain from reading Lies My Mother Never Told Me?